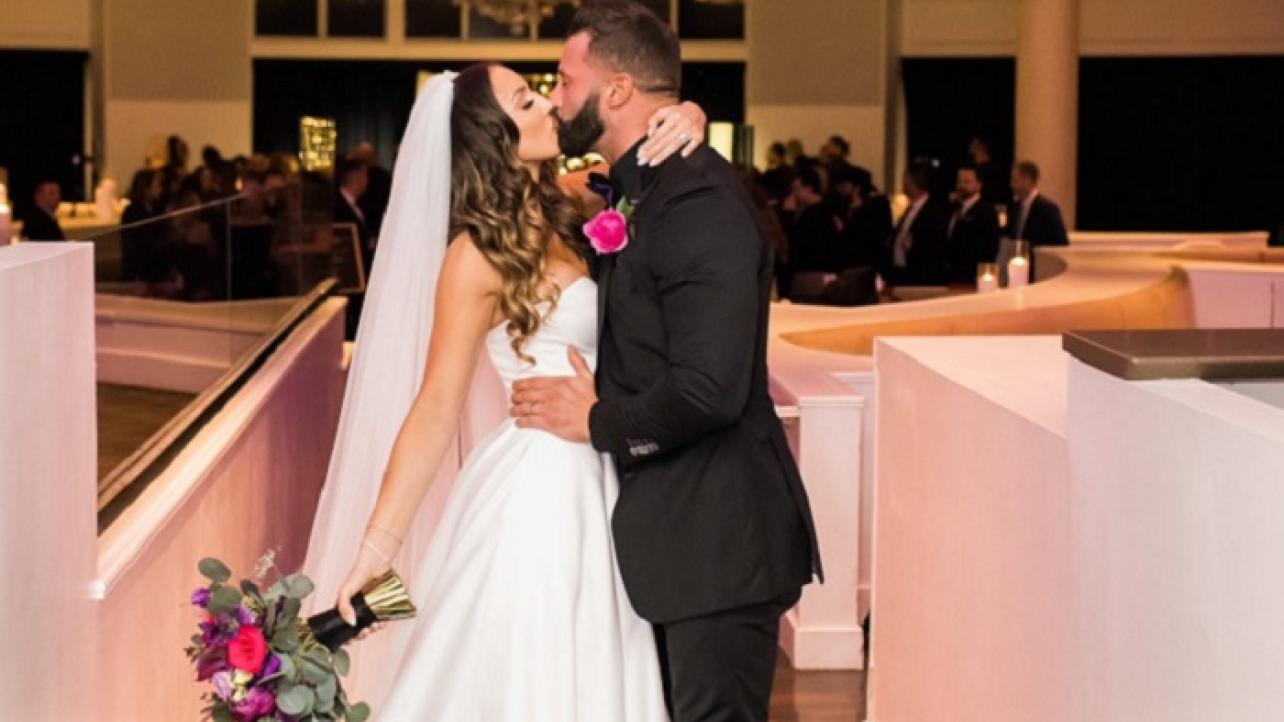 Love was in the air in Sin City on New Year’s Eve, as Matt Cardona and Chelsea Green tied the knot over the weekend.

For those who missed it, the IMPACT Wrestling couple each surfaced on social media this weekend to comment and share some photos from the Matt Cardona and Chelsea Green wedding ceremony held in Las Vegas, Nevada on New Year’s Eve.

The wedding ceremony was reportedly well-attended by familiar faces who currently work for WWE, AEW and IMPACT Wrestling, despite the fact that it took place on the New Year’s Eve holiday.

At the ceremony on Friday night to witness Cardona and Green get hitched were WWE Superstars Dolph Ziggler, The Miz, Maryse, TNT Champion Cody Rhodes, AEW Women’s Champion Britt Baker, as well as Brian Myers, John Morrison, Taya Valkyrie (aka Franky Monet), Allysin Kay, Maria Kanellis, Allie, as well as many others stars and familiar faces from the world of pro wrestling.

In addition to the photos that Cardona and Green shared in their initial posts on Twitter announcing their marriage, the IMPACT Hard To Kill 2022 main event title challenger resurfaced again on Sunday morning to share a cool photo that shows several of the aforementioned wrestlers, as well as some others, all together in their suits at the ceremony in Las Vegas earlier this weekend.

The caption Cardona posted with the photo that shows all of the WWE, AEW and IMPACT stars in the same shot read, “Thanks to my groomsmen for an absolutely wild weekend! I hope you enjoyed your custom socks!”

Check out the photo of the wrestlers from the top three pro wrestling promotions in North America at the wedding ceremony in Las Vegas on New Year’s Eve via the post embedded below courtesy of the official Twitter feed of Matt Cardona.

Also embedded below are a bunch of additional images from the “wild weekend” that Matt Cardona referenced in the aforementioned tweet thanking his groomsmen from WWE, AEW and IMPACT Wrestling.

If interested, you can also check out more photos and notes from the Cardona-Green wedding by clicking here.

Top #wrestling stars from #WWE, #AEW & #IMPACT ALL pictured together in #PHOTO shared by @TheMattCardona from his #wedding with @ImChelseaGreen in #LasVegas on #NewYearsEve on #Friday (see below) + Additional pics from Cardona-Green wedding! pic.twitter.com/4LH6iPJNfU

Thanks to my groomsmen for an absolutely wild weekend! I hope you enjoyed your custom socks! pic.twitter.com/hgn1jkjITK