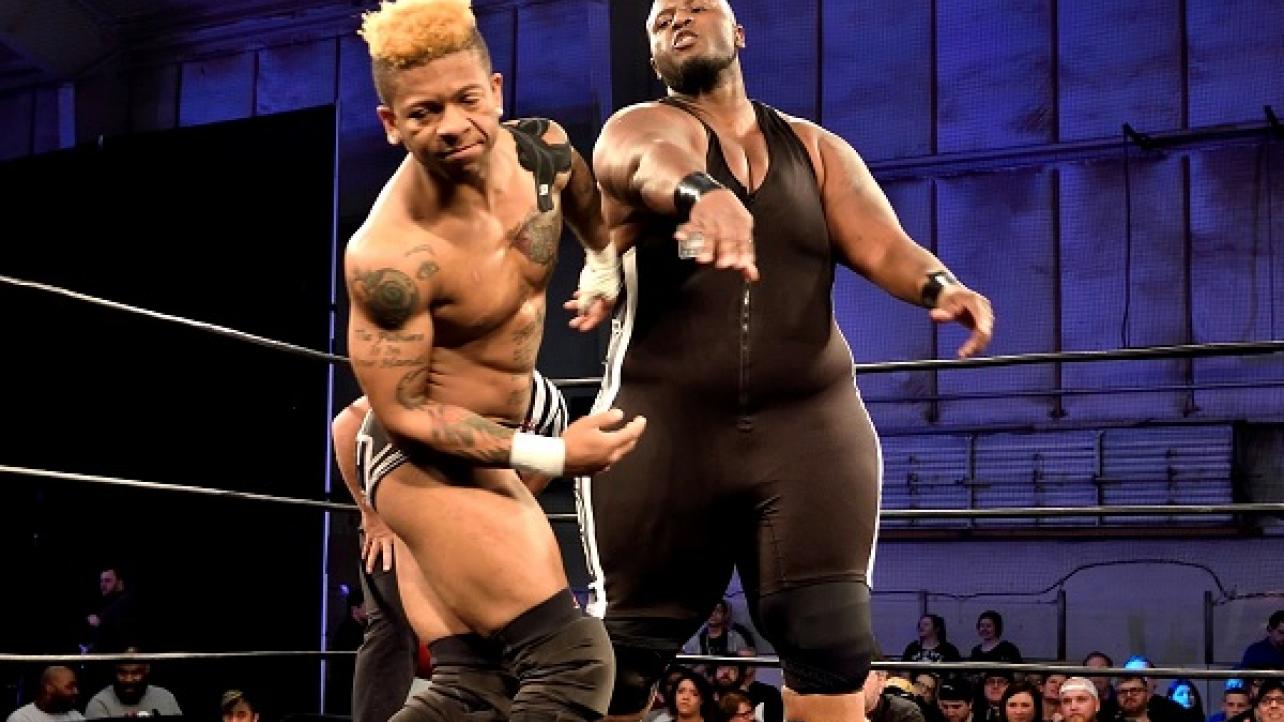 Shane Taylor On African-Americans In Wrestling, How He Got His Job With ROH

Ring Of Honor (ROH) star Shane Taylor recently appeared as a guest on the Pancakes & Powerslams podcast for an in-depth interview. Featured below are some of the highlights.

On how he got the opportunity to work for Ring Of Honor: “I was trained in Cleveland, Ohio by a guy named Raymond Rowe. Raymond Rowe, obviously a former two-time ROH World Tag Team Champion, and a former IWGP Tag Team Champion with Hanson, ‘War Machine.’ The whole time I was up there riding up with them. They were taking me as many places as they could, showing me as much as they could. Then after a few years of that, Raymond moved to Texas so I was on my own and doing my own thing. I felt that I had sort of peaked to where I was at. I was one of the best guys there in the area, and really wasn’t getting the opportunity to be in the ring with people that were better than me. That is the only way that you get better at doing this, is to be around people that are better than you. I don’t say that trying to be cocky or anything, but I felt that I was in the same level as everyone else, but I wasn’t getting any better. Raymond Rowe convinced me to move to Texas, and the few years that I have moved down here to Texas I have made tremendous strides.

“Also, with Wildcat Sports in Louisiana and different places like VIP in Dallas, WrestleCircus in Austin, and really just getting a chance to re-start. When I went to Ring of Honor I was riding with Ray Rowe; went to a few shows there just trying to get my face seen and talk with folks to network, eventually being around the guys and talking to them and getting to know them. They found out I was a pretty good dude and I was pretty okay at this wrestling thing. They gave me a shot; they liked what they saw. They gave me some critiques to work on, and each point that I came back I improved in each areas that they asked me to work on I improved in and that goes a long way so eventually they saw me keep it together and that was their chance that they saw that they could do something with me.”

On working with Raymond Rowe and War Machine: “We just really played off of our real history. He is one of my best friends in the world. He is the Godfather of my daughter. We have been tight since I was 20 years old. When you are in there with one of your best friends, you are in their with someone that you consider family and blood, you up your game. Not only do you want to make him proud, but you want to prove to the world that he wasn’t lying when — I wanted to prove personally that I wanted to make him look like Nostradamus when he would tell people that my guy is great here and then we go out and do it and show them. To me, there is nothing better than that. When I am able to tell you that I am going to do something and then watch you watch me do it, that to me is very fulfilling. We definitely wanted to go out there that not only are we two of the best tag teams in the world, but if you give us the platform and the time to do it then we are going to make it special, so that was really cool.”

On how he chose to have the kind of wrestling style he uses: “I have always been attracted to that style. I have always been deceptively athletic, as I like to say. A lot of people see me and think that he is this, but I have been boxing since I was 5 years old. I have been playing Football, Wrestling and Track & Field my entire life, since Middle School. I am a very athletic person. Now that I am changing my body up more to reflect that reality it doesn’t catch as many folks off-guard. For me, I have always been able to do these things, and when you look at guys like Vader and Stan Hansen, guys of that sorts, they were always big guys, but they had some special things that they did athletically that made them stand out, so I wanted to mold myself in that image, to not knock anyone’s teeth out, but to be able to run around and do things that I want to do. If you have a well-rounded attack that makes you that much tougher of an opponent.”

On African-Americans in pro wrestling: “One thing that I feel like black people as a whole need to do is stop dividing ourselves with things. We should be able to look at people’s accomplishments and take them as a win for our culture, as opposed to looking who is in what, or who is classified where, because nobody else does that. No other group does that. We happen to be the only group that does, and it is to our detriment. We should be applauding the fact that Mark Henry was World Heavyweight Champion. We should be applauding that Booker T was a multi-time World Heavyweight Champion. Whatever the case may be as to the circumstance is irrelevant because that is still a representation of our culture. Even with The Rock; I don’t care what he promotes, I don’t care when he does it, or what he does. The fact is that he is who he is and we should see that and accept that and count that as a win like any other group that because it’s not just one way or the other. That is something we look at and we should take pride in. He has done it in a way that nobody else has been able to do it. He can arguably be the best of all-time and that should inspire us to go forward and use that as a platform and as an example to only work harder. When you are talking about the business aspect of it, this is the thing.
“In Professional Wrestling, you have a sport with a majority of the fanbase being one group of people. In this business it is about money, selling tickets, and something people can identify with so it is a tough task to identify with someone who doesn’t look like them. The catch-22 is that you can say, well, you can showcase people in a way that would make them more relatable and put somebody in that spot to be able to see if they can carry that ball; fair enough, but nobody likes to lose money, so the unknown is a problem when you get to making those kind of choices, because while it could be wildly successful, it also could not, you know? Then what do you do? You will always have the opinion of some that they didn’t get a chance, so it is tough. As a Professional Wrestler, who also happens to be black, you have to be able to go out there and prove yourself first. There are so many people that have to go out there and make themselves stars rather than the company going out there making them stars because they have to see that the equity is there. They have to be able to see that if they decide to move forward with you it is a good business decision with them. Speaking about ROH specifically.

“Before I got there, there was a stigma of sorts that it is hard to be successful there if you happen to be a black wrestler. And, at the time I am looking and taking all this stuff in, I am looking, and the World Champion is Jay Lethal. He’s also the Television Champion, so he is breaking new grounds and creating these unprecedented feats and defending two titles on one pay per view, and I’m like, okay, it is possible. Is it going to be easy? Absolutely not. But it’s possible. While there have been many that have come and gone who have a legitimate gripe, it is one of those things that, if I want to change this culture, or change this perception, I can’t do it outside of the company. I have to be there. You can’t change anything in this world sitting on the sidelines. You have to be able to get in there, get your hands dirty, and help. Be the change that you want to see. I think when you look at the history of ROH there’s only two champions who have been black; one being Jay Lethal and the other being Kenny King. When you look at 15 years of a company and the plethora of guys that have come in there, you wonder holy hell, how has that has been possible? You run down the gamut who have gone on to other companies and won championships and gone on to be wildly successful overseas and whoever they work for, you stop and think that perhaps there is some truth to it, but again, there is different circumstances for everybody.

“Again, it is something that is going to be a constant battle. It’s something that will be a constant struggle. But it is also something that is able to be in control if we continue to take strides in being excellent. Will it be a harder road? Absolutely. But at the end of the day nobody can say that anything was given to us, and nobody can say that we didn’t earn it. If you are put in that spot you have no choice, you have to earn it. That would be my answer; to accept the wins that come our way as a culture and build upon those. Try not to quantify and classify who is what or this and that because I am sure they had the person there that made them money like The Rock, [Steve] Austin, [John] Cena, or [Randy] Orton did that they would be able to put someone in that spot. We just have to see who that is.”

Check out the complete Shane Taylor interview at BlogTalkRadio.com.

Shane Taylor On African-Americans In Wrestling, How He Got His Job With ROH