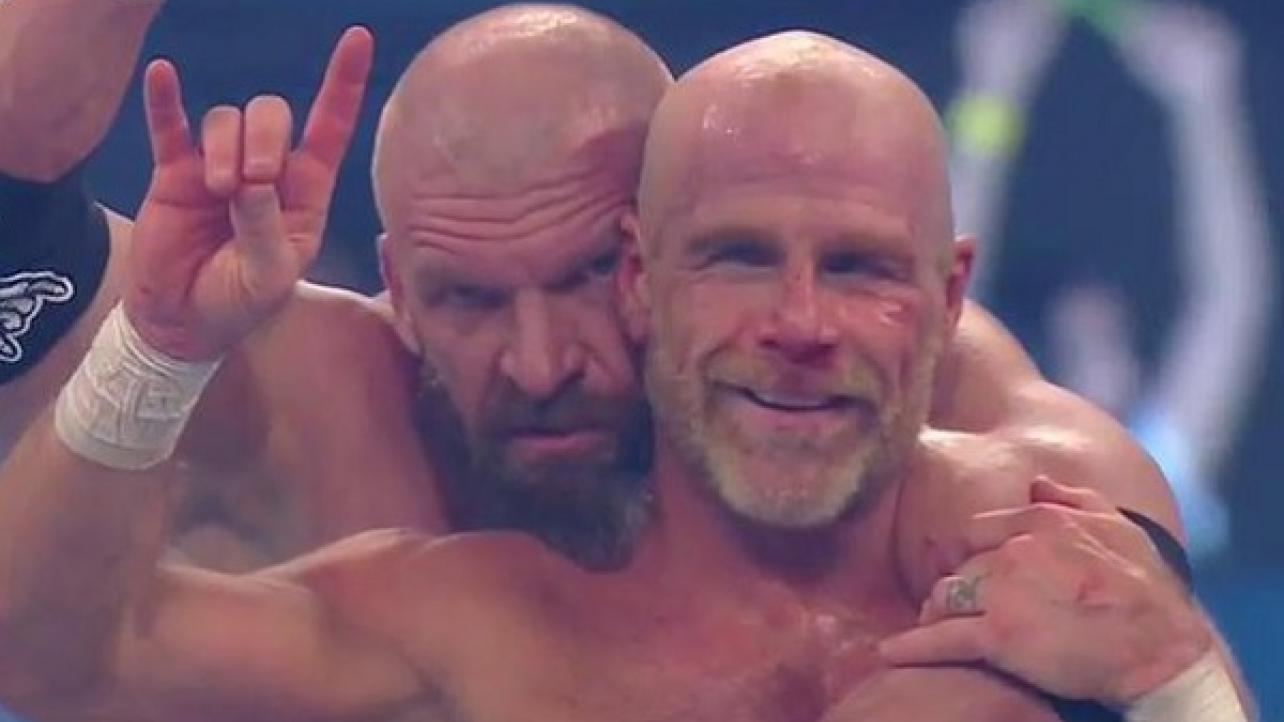 Following his long-awaited comeback from retirement, WWE Hall Of Famer Shawn Michaels reflected back on returning to the ring with Triple H against The Undertaker and Kane at WWE Crown Jewel during his recent appearance on E&C’s Pod Of Awesomeness. Featured below are some of the highlights from the interview.

On being glad he returned but having no plans to return to the ring again: “I’m glad to say that I did it, but I don’t want to try it again. Negative. Yeah, yeah, so, look, the one upside is… again, you’re always just curious, ‘can I do my stuff?’ So, technically, yeah, I could go in there and do my stuff and have the young guys work around me and all of that. But the 100% only reason I said, ‘yes’ to this one was, one, it was a special request by other people. And, again, it was a chance… I looked at it like someone is asking the Stones and KISS to come over and just play their greatest hits. That’s it.”

On those who feel he returned at WWE Crown Jewel simply for the pay day: “Unfortunately, everybody feels like it was all about the money and this, that, and the other. And I mean it respectfully, of course, but, technically, I’d make more money doing a single’s match at WrestleMania. Do you know what I mean? Because that brand is bigger. I’m charging more for a single’s match! Do you know what I mean? But I didn’t feel like I was put in a position in this particular match to be that guy. Do you know what I mean? And everything else about working with a younger guy at WrestleMania puts me in a much tougher, more difficult situation performance-wise. And that’s something I had been consistent about over the last eight years. I didn’t want to be put in that position because I’m good with the performances that I’ve had at WrestleMania. I wanted to end those the way that I ended them. [Crown Jewel] just happened to be a special thing that again in a million years I didn’t think would come up, but it did and that honestly is the only reason why I said, ‘yes’.”

On being held to a higher standard for his in-ring work than others: “I go out at 53 [years old] after eight years and I think it’s passable from everybody’s standpoint. I don’t care what anybody says. When I came back in 2002, I mean people saw my first match back and immediately, I mean, it took one day to go back to them holding me to the standard that they held me [to] in ’96 when I left. Do you know what I mean? The only thing is that, and it’s a good problem to have, I wouldn’t get held to the same standard that Flair gets held to. If he doesn’t do everything spot on or perfect, that’s fine. They still give him some grace, and some mercy, and all of that. [Edge and Christian] know as well as I do that I won’t get that. I miss a step, I do one thing [incorrectly] and they’d be all over me, so it just doesn’t work. And I don’t say that bitterly. It’s just one of those things that, and, again, it’s flattering. Yeah, I’m held to an unfair criteria and I’m one with that, but I’m also not going to try to live up to it either because I don’t think any man can.”

Check out the complete Shawn Michaels interview from E&C’s Pod Of Awesomeness at WestwoodOnePodcasts.com.