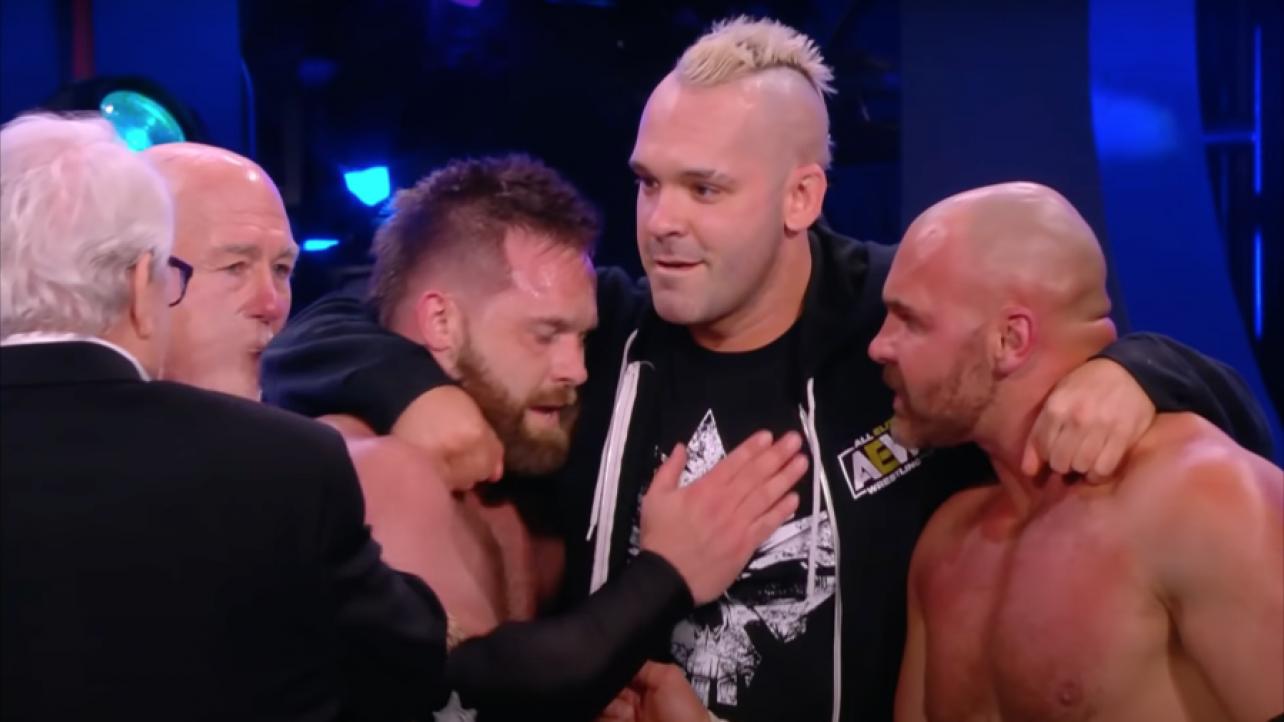 Shawn Spears Reflects On WWE Departure, Talks Betting On Himself

AEW star Shawn Spears recently spoke with Inside the Ropes to discuss the fallout from last week’s Blood and Guts matchup, and how his life drastically changed after leaving WWE. He also revisits his big moment at the 2017 Royal Rumble, where he made his official main roster debut after leaving NXT. Highlights are below.

Getting his big moment at the 2017 Royal Rumble:

“That moment at 2017 at the Rumble, I’m going to carry that for the rest of my life, not because it was just a cool moment for me to come out in front of 50,000-plus people and have them all, you know, having a great time. It’s because it was about the collective feeling that everybody was in on it, you know what I mean? Like, I haven’t talked about it too much but, as the clock was counting down backstage and I was about to go through the curtain, there was a lot of talent in gorilla at that night at the Royal Rumble and as [the clock ticked] ten, nine… They all started clapping because a lot of them had knew my story and they knew what I’d been through up until that moment. Things like that, I’m going to carry with me forever. Do you know what I mean? So it was just a beautiful moment and a memory that I’m going to hopefully remember when I’m 70.”

On his decision to finally move past WWE and taking a chance on himself:

“I didn’t have it [confidence] at first. I think that was about as close to a six-month process of just everyday thinking about it. Every week, going to work. It took a lot because obviously, I think she was my fiancee at the time, still worked there. I had all my friends that worked there. I got along great with a lot of NXT management. It was just… It was a tough situation, but I knew… And I don’t know how, I don’t know how I knew, but I just felt, I guess that’s probably the better way to say it, that if I didn’t leave and take a shot on myself and see what I was at least capable of, in 30-40 years down the road, I was going to say I should have. I knew that that’s what I was going to do. I was going to look back on this time and go, “Damn it, I should have took a shot on myself.” And I’m a big believer in – the worst feeling in the world is probably regret. And there’s nothing… At a time where you can’t do anything about it. I’m a big believer in you know, you’ve heard the saying before, “The first step is always the scariest” – and it is. It’s petrifying, but that first step turns into a second step, a third step, a fourth step, and now all you’re doing is you’re just walking.”

How he’s nearing the end of his career:

“All it depends on is are you walking in the direction of your happiness? That’s it. That’s all boiled down to. It didn’t boil down to money. It didn’t boil down to being in the main event of anywhere. It didn’t boil down to being a world champion anywhere. It boiled down to being able to wake up every day, be excited to go to work and get to wrestle. And every time I’ve gone to AEW, I’ve wrestled – whether it be on Dark, Dark Elevation or AEW Dynamite, I get to wrestle and I get to wrestle the way I want. So to me, and I’ve said this before, I’m much closer to the end of my career than I am with the beginning. So I can barely remember what I did the first five years of my career. So hopefully, by the time I wrap things up, tack on 20-30 years when I’m 70, I’m going to be able to remember the last three to five years of my career, hopefully. So how do I want to remember those? Do I want remember them like, “Yeah, man, I wrestled the way I wanted to. I had a damn good time. I kind of went out on my own shield,” or do I want to think like, “Man, I made a lot of money, but I sat around a lot”? I could always make money, I can make money doing something else, anything else, there’s always a way to make money, but there’s not always a beautiful memory that you can keep with you going forward. And that’s what it all boils down to.”

Shawn Spears Reflects On WWE Departure, Talks Betting On Himself