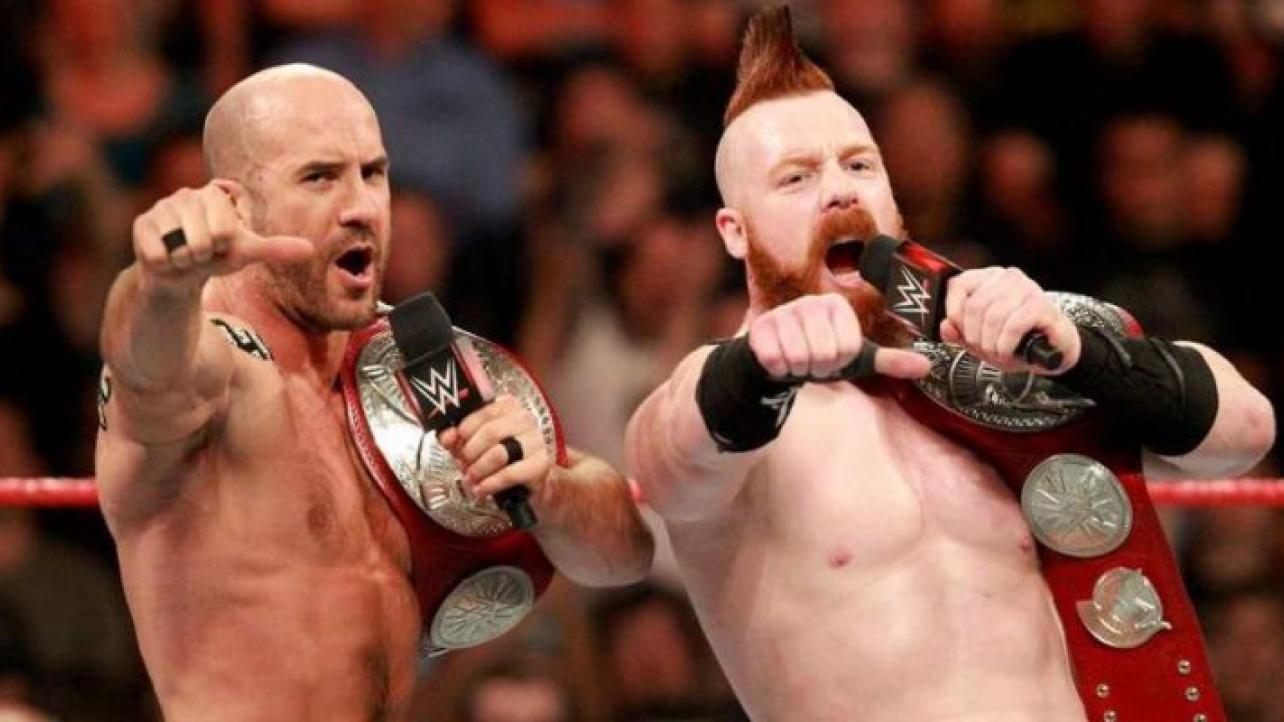 As noted, RAW Tag-Team Champions The Bar (Sheamus and Cesaro) recently joined Edge and Christian as guests on their E&C’s Pod Of Awesomeness show. Featured below are some of the highlights from the interview.

On the barroom brawl that led to them being a tag-team:

Sheamus: “The Guinness they were pouring looked like it had been out for two weeks. We were sitting there so long I actually started drinking and it was absolutely disgusting. But at the end of it, there’s a part where, like, we both do the ‘cheers’ and we drink the Guinness and Tony [Antonio Cesaro], Tony’s looking at it, like, I don’t know, like it’s a pint of puke. So if you look closely at it, he doesn’t even want to touch the stuff. So I was hoping Tony would get on the Guinness train, but no.”

Cesaro: “At the end, when we both have the Guinness in our hand. It’s like this weird, awkward ‘cheers’ and he drinks and I just hold it till we go off the air. Yeah, good times.”

On whether or not the two were “all-in” on being partners from the start:

Sheamus: “I was in from the beginning, the get-go. We both talked about it, like, where we were, and we battered each other in the best of seven [series] to remind people just how good we were and what we could do. And then, the tag team thing came along and we jumped on it. It came out of left field. We had no idea where the whole thing was going.”

On his WrestleMania open challenge tweets:

Sheamus: “Regarding the tweet I put out [last week] or whatever, like, I got loads of stuff. The Young Bucks replied, that young kid Bubba Ray Dudley replied, that young kid, The Authors Of Pain were there, a lot of NXT teams. Like, I think it would be a really cool situation too, like a Rocky story, to have a team that wasn’t on the main roster just came out of nowhere. Do you know what I mean? Just a team that had the opportunity like Apollo Creed and the Rocky thing where a tag team stepped up at WrestleMania. That was kind of the vibe I was thinking. I just said, ‘we need competition and we need someone to step up’ because it’s funny – when we won the titles the first time from New Day, we didn’t win them on the first attempt. For us, I felt like it really meant something when we finally beat New Day. Obviously, The New Day had an incredible run as Tag Team Champions, a record-breaking run. And then, the Hardys came in, and they were fresh again, and we had so much fun wrestling them. And then, we overcame that. And then, it was Seth Rollins and [Dean] Ambrose and they were back together. And then, we overcame that. And then, Jason Jordan and Seth and we overcame that, so it [has] been an incredible run for us. But, like, we were looking for opponents for WrestleMania and we were waiting for someone to step up. Sometimes at WrestleMania, it’s like, ‘who am I going to get? Who am I going to get?’ and ‘who are we going to face?’ I think it’s, ‘who’s going to face us?'”

On The Bar team name and hand gesture:

Cesaro: “That completely happened [inexplicably]. We did one of those VIP meet-and-greet in Germany, I think it was, the European tour, and we didn’t have a pose. When people come up, you just kind of put your fist out like, ‘argh,’ wrestler face or whatever and I think we just took thumbs up and Sheamie had mentioned that [Donald] Trump may have ruined the thumbs up pose, so we just put the thumb in the middle and then we were like, ‘that’s what it looks like when something is mediocre or okay, but we’re better than that, so we should be the bar and be above it, above the bar’ and that kind of evolved into, ‘we don’t just set the bar, we are The Bar!’ And that was kind of just us goofing around and that happened.”

Check out the complete Sheamus and Cesaro interview from E&C’s Pod Of Awesomeness at Art19.com.