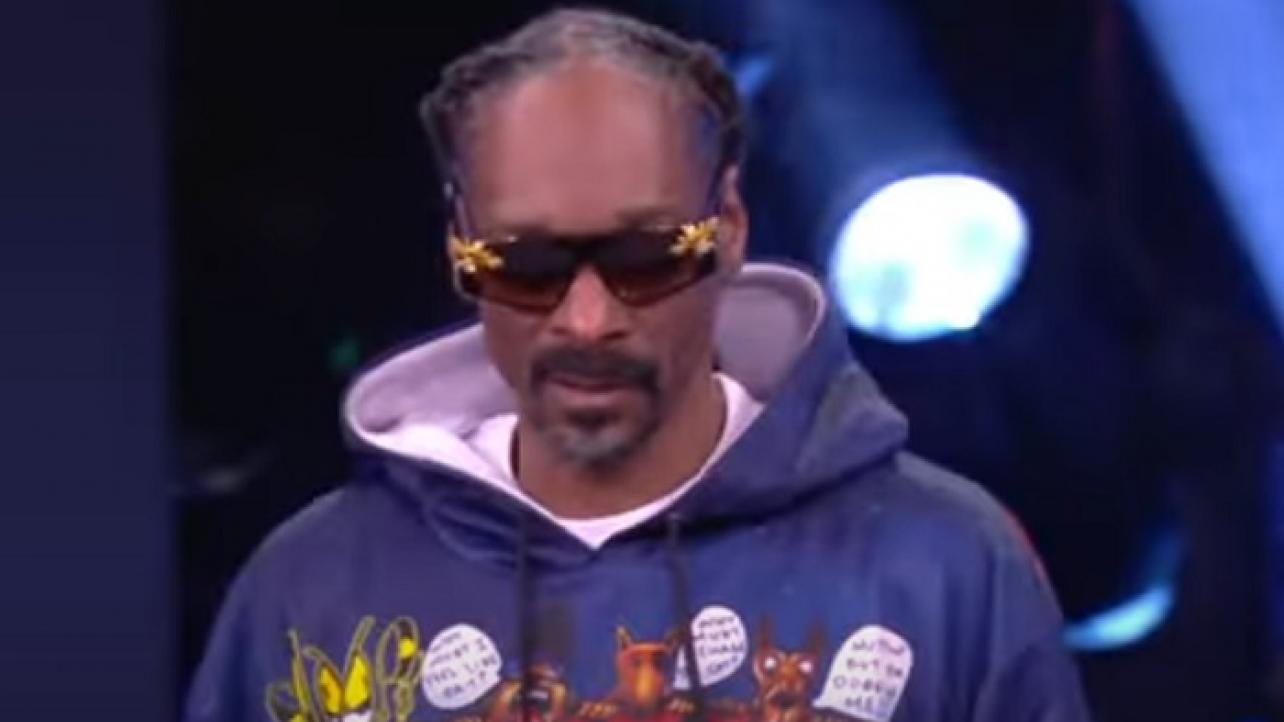 — It looks WWE and Snoop Dogg are back in the ring together, as the company announced that he will be a playable character in their “WWE Champions” mobile game.

LOS ANGELES – Feb. 1, 2021 -This week, WWE Champions 2021, the #1 most-downloaded WWE mobile game, celebrates its fourth anniversary with the in-game debut of pop culture icon and WWE Hall of Famer Snoop Dogg. Players can add Snoop Dogg to their roster and compete against more than 250 WWE Superstars and Legends in the game already. This debut marks the first time Snoop Dogg has ever appeared in a WWE video game.

WWE Champions’ first-ever celebrity integration reflects Snoop’s long-time relationship with WWE. As a super fan and member of WWE’s Hall of Fame celebrity wing, he has made multiple appearances at WWE events including WrestleMania® and Raw. Snoop Dogg’s love of WWE is a family affair — his cousin is WWE SmackDown® Women’s Champion Sasha Banks.

“The Doggfather is ready to get in the game,” said Snoop Dogg about his debut. “Having the chance to be part of WWE Champions combines two things I love: gaming and WWE. Join me in the ring with some of my WWE favorites like Ric Flair, DX, and of course my cousin Sasha Banks. If you’re a WWE fan, you’ve got to catch me in WWE Champions.”

As part of his debut, Snoop Dogg will also act as the in-game master of ceremonies for WWE Champions’ Fourth Anniversary celebration taking place throughout the month of February. During the biggest celebration the game has seen yet, players will have a chance to add Snoop Dogg to their rosters, earn special in-game prizes from a limited-time Snoop Dogg prize vault, and snag daily Anniversary-themed log-in bonuses. All contests and game modes, from PVP Showdowns to Gauntlet Blitz events and Daily Tours will include Anniversary and Snoop Dogg themes. To take the event to new heights, WWE Champions will move their in-ring combat outdoors and upstairs, with all matches taking place in a special rooftop party-themed arena atop a helipad.

The fan-favorite title blends match-3 puzzles with action RPG gameplay, and recently surpassed $200M in lifetime revenue. Since launching in January 2017, more than 3​5​ million fans have completed over 1 billion matches, crushed hundreds of billions of gems and experienced the fun and competition of​ WWE Champions 2021. Players spend an average of 85 minutes per day playing with WWE fans from around the globe, battling for reputation, power and bragging rights in 1-on-1, tag team matches and Mixed Match Dream Team battles. The action changes daily, with weekly bouts that recreate Raw®, SmackDown, and NXT battles, monthly Pay-Per-View events and the ability to recruit more than 250 Superstars.

WWE Champions​ 2021, from mobile games company ​Scopely,​ is available for free on the App Store for iPhone and iPad, and Google Play for Android devices.

Scopely is a global interactive entertainment and mobile games company, home to many top-grossing, award-winning franchises including Scrabble® GO, MARVEL Strike Force, Star Trek™ Fleet Command, Looney Tunes™ World of Mayhem, WWE Champions, The Walking Dead: Road To Survival™, YAHTZEE® With Buddies and Wheel of Fortune®: Free Play, among others. Scopely creates immersive games that empower a directed-by-consumer experience. Founded in 2011, Scopely is fueled by a world-class team and a proprietary technology platform that supports one of the most diversified portfolios in the West. Recognized in Fast Company’s ‘World’s Most Innovative Companies’ and #2 on Deloitte’s ‘Technology Fast 500’ as one of the fastest-growing companies in North America, Scopely has achieved more than $1 billion in lifetime revenue by creating long-lasting game experiences. Scopely has global operations and games studios across Los Angeles, Barcelona, Boulder, Dublin, London, Seville and Tokyo with additional studio partners in seven countries across four continents. For more information, visit www.scopely.com.