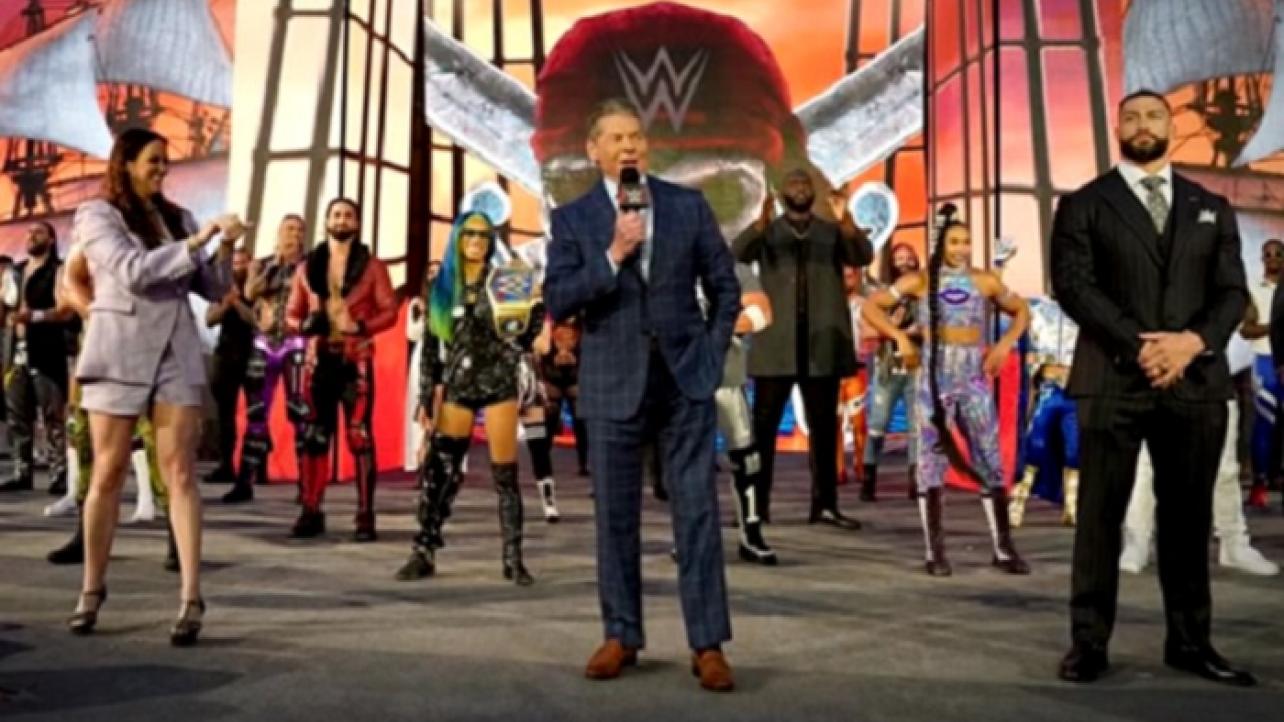 Stephanie McMahon issued an open letter on Friday morning regarding the new tagline that WWE has been using since the fans returned at WrestleMania 37 — “Then. Now. Forever. Together.”

In the letter, the WWE Chief Brand Officer spoke about the reactions from those in the company to the speech Vince McMahon gave to kick off night one of the two-night extravaganza at Raymond James Stadium in Tampa, Florida on April 10, 2021.

Check out the complete letter below.

On Saturday night, I stood on stage at Raymond James Stadium, surrounded by WWE Superstars, in front of a 103 ft long pirate ship, and looked out into a sea of fans. My father, WWE Chairman and CEO, Vince McMahon, addressed the crowd and said: “Throughout this past year our WWE Superstars performed tirelessly for all of you. Week after week, month after month but we all knew there was something missing, something very important, THE most important, and that would be all of you, our fans, the WWE Universe. And as we emerge from this dreadful pandemic on behalf of our entire WWE family, we would simply like to say thank you and welcome you to, WRESTLEMANIA!”

The 25K in attendance erupted and the rest of us had tears in our eyes; reinforcing the meaning behind our new company signature that started the show, “Then. Now. Forever. Together.”

WrestleMania streamed exclusively from its new home on Peacock in the U.S., and WWE Network around the world, taking place over two nights and making history.

Sasha Banks and Bianca Belair became the first Black female Superstars to main event WrestleMania. We had live musical performances from Bebe Rexha, Wale, Ash Costello and Ashland Craft, and Grammy award-winning artist Bad Bunny and YouTube influencer Logan Paul found themselves getting in on the action inside the ring. Bad Bunny’s performance receiving praise from ESPN touting it as “…one of, if not the, most impressive showings by a celebrity in the ring.”

For the first time we launched a series of NFTs featuring The Undertaker, had record breaking WrestleMania weekend e-commerce sales and record merchandise per capita sales in stadium.

WWE Superstars and executives participated in more than 300 interviews to promote our WrestleMania celebration including appearances on Jimmy Kimmel Live!, TODAY Show, ESPN Get Up, FOX & Friends, E! and Access Hollywood. And because we always want to leave our host city better off than when we arrived, we held more than 10 community activations throughout the week, from our community caravan where we recognized 11 local community leaders; to teaming with FOX Sports and Good Sports to donate sports equipment to Special Olympics Florida; and working with Feeding Tampa Bay, University of FL IFAS program, the Healthy Living Coalition, Nestle Waters and the Tampa Bay Sports Commission to dedicate the first of five sustainable community gardens throughout the Tampa Bay area to combat food insecurity.

It takes the effort of so many different people to make WrestleMania happen, especially during a global pandemic. Thank you to our friends, partners, employees, and of course, our Superstars for making it possible.

I hope to see everyone in person soon,