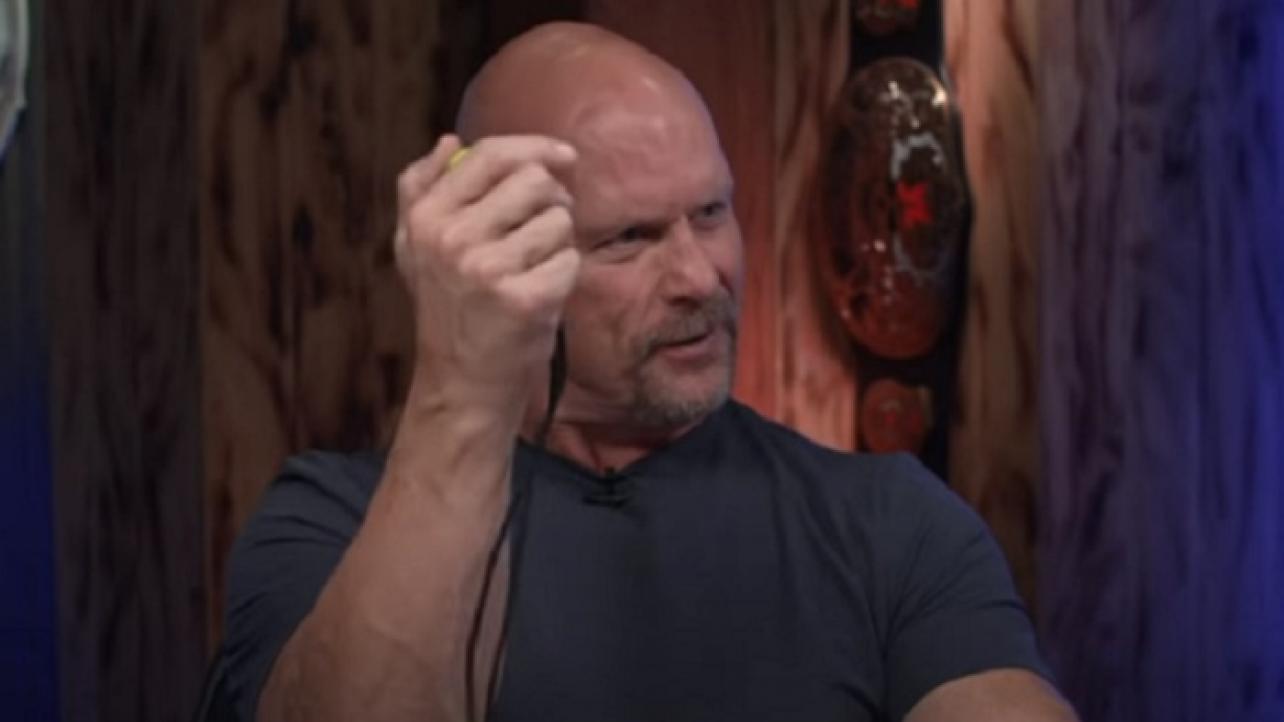 “Stone Cold” Steve Austin appeared as a guest on the latest edition of the “Drew & A” show on the WWE Network on Peacock for an in-depth interview with Drew McIntyre.

During the discussion, “The Texas Rattlesnake” spoke to “The Scottish Warrior” at length about his history with Paul “Triple H” Levesque, their Two Man Power Trip Of Wrestling alliance, a WrestleMania entrance he was a big fan of and more.

Featured below are some of the highlights from the interview, as well as a sneak peek preview clip of the new episode.

On working with Triple H: “I love working with Triple H. We hit it off when he came down to WCW way back in the day. We didn’t travel roads together but we were on the same page. We both loved bodybuilding, powerlifting. He’s a great worker, good mind for the business.”

On being a fan of Triple H’s entrance with Motorhead at WrestleMania 17: “At WrestleMania 17, you know Triple H was a big Motörhead fan, and Motörhead was out there. I remember before the show started they did this warm-up and man, they were just louder than hell. They were doing this warm-up and I was like, ‘Oh my God.’ And then during the show they kicked it off, and I’m a big Motörhead fan myself, and Lemmy was on another planet, he was just up there rocking and they let them play for about 60 seconds, and here comes Triple H. He walks out, and he’s all jacked up, he looks like a million bucks. He acknowledges Lemmy, and Lemmy just keeps on rocking because he’s in the zone. And then Triple H power-walks down to the ring because Undertaker’s fixing to follow suit on his entrance, and they were working together, and it was the greatest entrance I’ve ever seen at a WrestleMania, and he’s had many great ones as many other ones have too, but that one was so electric. It also had something to do with that record-setting crowd there in the Astrodome was amazing as well.”

On The Two Man Power Trip Of Wrestling with Triple H and their relationship behind-the-scenes: “But Triple H, a great mind for the game. I picked his opinion on many different things, and asked his opinion on many different things when I was on my run, and one of my ideas as a heel that I wanted to do was form a tag team with him, and call it The Two-Man Power Trip. We were really, really trying to get some heat, laying some heavy steel chairs down on The Undertaker, Kane, Hardys, Lita, my God. We were doing everything we could in my alliance with him, which kind of ensured that I was headed in a heat direction, and then fate hit one night in a tag match on Monday Night RAW, and he blew out that quad, and that was the end of that, And he made a successful comeback, obviously he’s had one of the greatest runs in the history of the business, but a guy that’s a lot of fun to be in the ring with.”

Watch a preview clip of the episode below, and sign up for the WWE Network on Peacock to check out the full show.