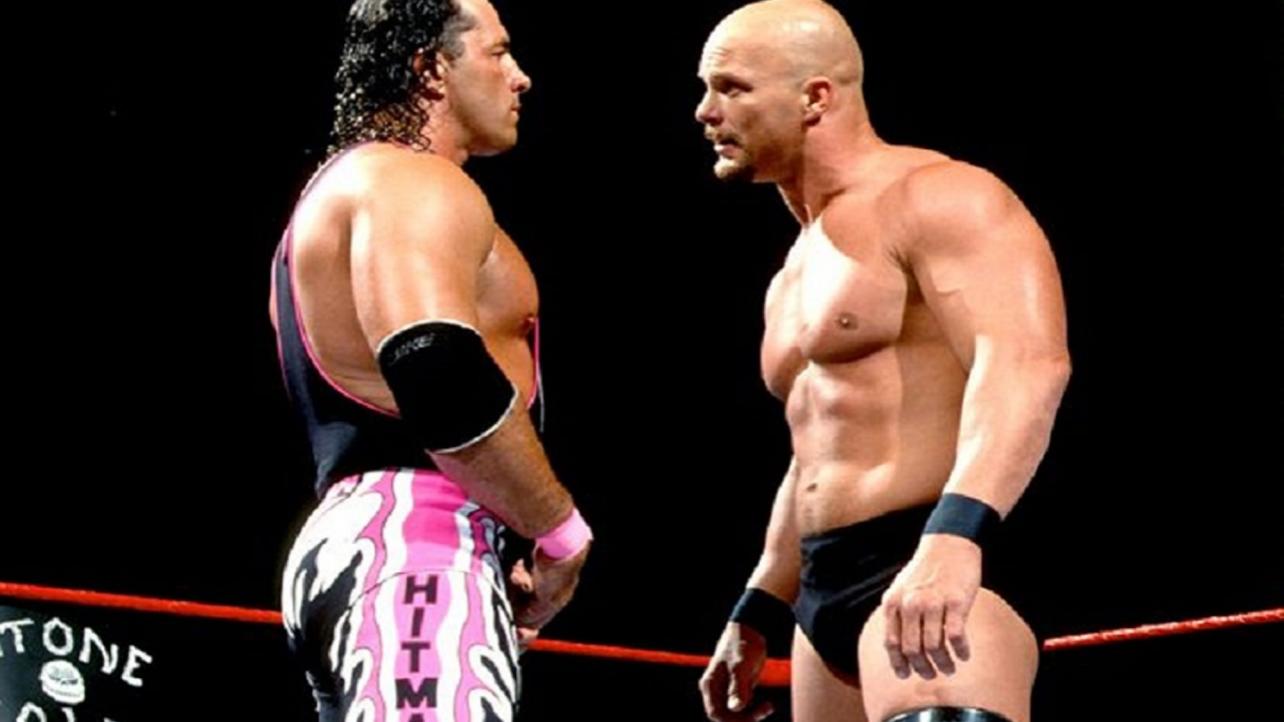 The Bionic Redneck” and “The Demo God” came together for an episode of Talk Is Jericho, where the host Chris Jericho sat down with Stone Cold.

During the podcast, Austin spoke at-length about Wrestlemania 13, Vince McMahon coming up with the finish, and many more topics.

Austin kicked off the topic by tallking about what led to the match, as well as the match itself. Steve believes Hart put him ön the map” during the collision, and told listeners:

“It was really interesting because Bret had seen me coming in WCW as he always says, and I’d been an admirer of Bret Hart’s work. I was big into the Hart Foundation – him and Anvil, I loved them as a tag team. I’d been watching Bret for a long time because got to Vince [McMahon] before I did. I remember he was going to do surgery to get his hip cleaned up, and he needed an opponent for Survivor Series. He told Vince, ‘Hey, I can make money with this guy.’ I get a phone call from Bret, and he wants to work with me. So, he hand-picked me to come back from his surgery. We would go out there, and it’s an old-school match. It’s kind of classic pro wrestling style. It’s a sold-out crowd in The Garden. We went out there and just turned in an instant classic, and Bret was coming back… And if you go back and you watch that match and you watch the finish with that gimmick roll-up off the Million Dollar Dream, then as I roll out because he’s outsmarted me – if you watch his face and this is a shoot, he mouths ‘f**k’ because he’s dead-dog tired. He was blown up because he’d been at the house healing up, and it was that grueling of a match. Bret Hart is one of the greatest of all time, so the fact that he hadn’t done a whole lot of in-ring work or none really and had to knock a little bit of ring rust off, he was gassed. To that note, Bret was always great 30 minutes into a match of just looking dead-dog tired but fresh as a daisy. But on this occasion, because it was a comeback, he was actually tired after the match because it was that grueling. It was a classic style match that I was very proud of, and at that time, putting in a match like that Vince started to see who and what I could do as a performer as Stone Cold Steve Austin. That match at WrestleMania 13, Bret Hart put me on the map. He made Stone Cold Steve Austin. I had to do a lot myself obviously, but that’s how important Bret Hart was to my career.”

Steve continued to talk about the epic match, and covered the discussion he had with Vince McMahon about the finish. Austin mentioned:

“I kind of knew a start, kind of knew a heat spot, kind of knew a few things were going to happen, and then we just filled in the gaps out there. If you go back and watch that match, if you watch me, I’ve got my head down, and everything is protected, but you can see who’s calling the match. I’m calling it. We had already talked. Bret said a few things, but I was kind of calling the match, and we just went out there and I’ll never forget, we went into the finish room with Vince. We sat down, and Vince said, ‘You guys go do whatever you want to do. You got about this amount of time, but what I’m seeing Steve is you passing out in the Sharpshooter from Bret… Bret was down with it because it was his finish and he was going over. Bret went over every single match I ever wrestled him, and I’m cool with it. I’ve never beaten Bret in my entire career, and I’m not going to make a comeback to beat him. Me and Bret go out to the ring, and we’re just kind of standing there on the apron talking, and I said, ‘I’ll be right back.’ And I went back into Vince’s office because I’m willing to do business with Bret, no problem. But I’m a little worried about that finish. I go back into Vince’s office, and I still don’t know him that well at this time. And I said, ‘Vince, are you sure about that finish?’ And you know how Vince talks. He looks at you. He goes, ‘Oh goddamn. Oh goddamn, Steve, I’m telling you, it’ll work.’ That’s exactly what he said, and if Vince gives me that reassurance and he’s the guy, so I said, I’m down with it”.

Austin went on to say that Bret Hart had the idea for Austin to get a little juice, and gave some insight into a talk he had with Brett about it. “The Texas Rattlesnake” said:

“I go back out there and me and Bret are talking, and he goes, ‘Steve, if you’re going to pass out in the Sharpshooter, we need to have some color.’ I said, ‘You think?’ He goes, ‘Yeah.’ At the time, there’s a no color policy. I’m the newer guy. I ain’t got no tenure, and Bret offers up. I’d done the business plenty, but under this new place I’m in, I ain’t got no stroke. He goes, ‘Hey man, if you want, I’ll get it for you.’ That’s a nice insurance policy. He just put me under his umbrella. That was his idea. I’m so glad he did because if I would have done the same exact thing, the way I sold that, I sold that like a motherf**ker. But had I not had all that red shit on my face screaming through my teeth and then you see how much blood I actually lost, and it wasn’t one of those gore fests because you can go too hard and get too much and it becomes distracting and just hard to watch. This was not hard to watch. This just added so much level to the struggle that I was going through but was not just a turn-off, and so it became, as you said, one of the most iconic images, in my opinion, in the history of the wrestling business. I’m not going to say the most, but one of the most.”