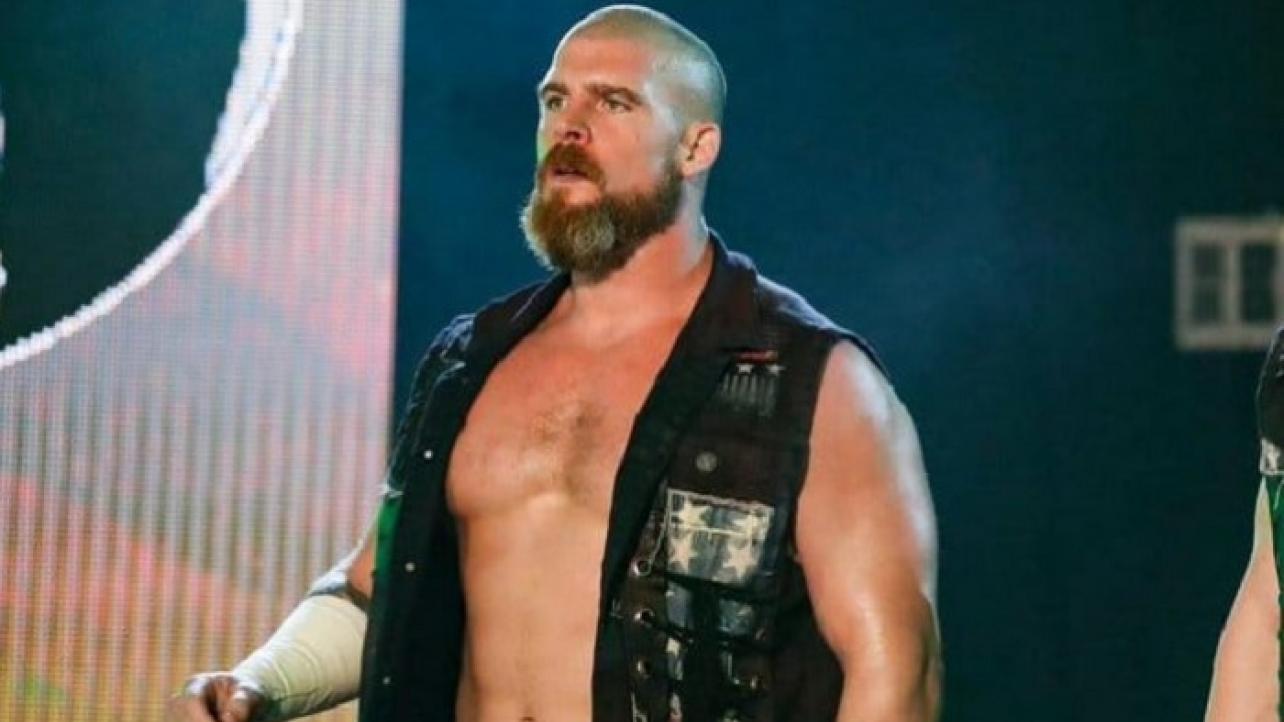 Steve Cutler Explains Why He Was Really Let Go From WWE, Details Call He Received From Mark Carrano About It

Steve Maclin, formerly known as Steve Cutler of The Forgotten Sons in WWE, recently spoke with Fightful for an in-depth interview covering all things pro wrestling.

During the discussion, Maclin spoke about the call he received from Mark Carrano informing him of his WWE release, why he was told he was being let go versus the real reason, the controversial political tweets from Jaxson Ryker and the reaction to them behind-the-scenes in the company.

On his WWE release and testing positive for COVID-19: “It was just more shocking than anything just ‘cause I did not expect that from what was being said to me and then also not being said to me as well. Part of me is like, ‘Oh, okay. Now I’m looking back at things and alright it does make sense.’ So, for my side of the story, which everybody plays the game of telephone in the wrestling universe, so my side of the story is New Year’s Eve, go to a party with friends that I was around with throughout COVID who were constantly tested. We all know because we’re constantly tested together. So, it’s a small knit group that we have. We have a New Year’s party, and there’s multiple New Year’s parties and that’s where the mix-up came from somehow, I don’t know, higher. Doesn’t nearly mean anything now. We had the New Year’s party. Next day I go to TV, I test negative. Work TV, Blake and I work there with Corbin. We do our thing. Monday I find out one of the friends that we had there tested positive. So, Deonna and I went out and got tested like we should do, like anybody should have done, like the right minded and I came back negative. That was that Monday. So, okay cool. No symptoms. Nothing happening. Go to TV Friday and I test positive for the nose swab at WWE TV at Tropicana Field. I’m like, ‘Okay, what do I do?’ Get on the hotline with doctors, talk, we find out what’s going on and they say, ‘Yep, just quarantine.’ Okay, cool. Talk to the writers, everything’s cool and then Blake tested negative. So, he stayed.”

On Vince McMahon being angry at him and other WWE Superstars for not taking proper precautions: “I’m on my way home and then here I am getting texts from Blake. Get a phone call, ‘Hey, do you have heat? Like for something you have done?’ I’m like, ‘I dunno. Why?’ He goes, ‘Ah, somebody’s kind of pissed and a few people said in a meeting that Vince wanted to fire you at that moment,’ and I had a few friends that were in that meeting as well. I was like, ‘Huh. Okay. That’s good. So, of course, I send a message to Mark Carrano saying, ‘Hey, I don’t know what’s going on or what’s being thrown around, if there’s anything you need to talk to me about, please call me, text me, let me know what’s up.’ No answer. That’s how I found out, pretty much, I had COVID that day, quarantine for the next week. Kept in contact with writers. Still no answer back from higher of writer team and creative team. Yeah. What a time. So, it’s just one of those moments of loss.”

On the call he received from Mark Carrano informing him of his WWE release: “One of the writers we kept in touch with said, ‘No, you guys are fine. You guys were brought up in creative as well.’ Okay, cool. Then weeks go by. Weeks go by again. I know Vince McMahon wasn’t at TV for a while ‘cause his brother passed and condolences for that. So, we knew obviously we’re not getting an answer ‘cause the boss isn’t there. Makes sense. So, in the meantime I got in touch with Mark Carrano because Otis reached out to me, ‘Hey, brother, you mind coming around? Like rolling around with the big man class (at the Performance Center)? Could use some help.’ I’m like, ‘Dude, definitely.’ It gets me in the ring, keeps me in shape, I get to actually be in a good ring at the PC and I know everybody and I can bump around and I know how Otis works. We’ve worked together for years. So, that day I’m in there, it’s producer Adam Pearce, myself, Drew Gulak, Babatunde and then Big Jordan / Omos. We’re all just rolling around, and I get done in the ring and I have a text from Mark Carrano. He says, ‘Hey, Steve. When you get a chance, give me a call.’ I’m like, ‘Okay, cool. It’s just about, maybe, some creative.’ Text him back, I’m like, ‘Hey. I’m just leaving the PC now. Can you call now?’ He says, ‘Oh, I’m getting on a flight to Tampa. I can get back to you in a little bit.’ Okay, no problem. Few hours go by, get home. Eating dinner, it’s around 7:30 and then I get the call from Carrano saying, ‘Hey, Steve.’ ‘Oh, hey, Mark. How is everything?’ ‘Good. I don’t like making these calls, but—’ Obviously. Instantly it just clicked. ‘Ah. I’m getting fired. Awesome.’ Looked at (Deonna). She’s like, ‘What’s the matter?’ I’m just like, ‘Ah, well I’m getting fired.’ ‘Lo and behold it’s the exact same timeframe kind of close to when she was let go. But, it was just one of those things.”

On being told he was being released because creative had nothing for him but feels he was really let go for catching COVID-19: “A phone call was just more upsetting because just to say creative had nothing for us was kind of, ‘No, I got fired because I had heat for COVID.’ I know people will say, ‘Well, that’s your own fault.’ Yeah, maybe it is. But, at the same time I took my own precautions. I live in the state of Florida. It’s an open state of policies on anything COVID related. I wear my mask when I’m out. I do what I’m supposed to. But, then when I’m around friends who I know are tested, I try to take care of that myself and surround myself who I know that we’re good with and if it happens like we did, I got tested. It was just being told creative had nothing for us and I called B.S. right away on that. I let him have his piece. I was like, ‘Well, if creative has nothing for us, why do we have merchandise? Why are we being told we’re going to be in this storyline?’ I was like, ‘I was told our storyline with the Mysterios was scrapped because when they contracted COVID, that took us off of TV and scrapped that story for a little bit. Then they tried to go back to it and then Murphy got COVID.’ It just kept building up, building up.”

On the backlash behind-the-scenes due to Jaxson Ryker’s controversial political tweets: “Listen, everybody has their opinion. Everybody’s allowed to have their opinion. That’s the point of social media. Obviously there’s a two sided coin to everything on how you feel and how you view things. Feel how you want to feel. Say what you want to say. That’s your business, not mine. I’m out walking the dogs with D and I get a bunch of texts. My phone starts blowing up, ‘Hey, what the hell?’ I’m just looking, it’s just screenshots of the tweet. I’m just like, ‘Oh, come on.’ I’m like, ‘I’m doing nothing I’m literally at home walking my dogs.’ Then it just instilled from there on how everything unfolded and that happened.”

On feeling that everyone is entitled to their own opinions but that he personally disagreed with Ryker’s views: “We reached out to the office and we went to the Performance Center where Smackdown was taping still at that time, so was RAW. So, Blake and I went in that next day ‘cause Ryker was living in North Carolina at this time. He moved out of Florida about that time. So, Blake and I went in, sat down with Mark Carrano. ‘Hey, you guys are good. Don’t worry about it. Everything’s going to be fine. Just give it a week. It’ll kind of blow over.’ Okay. But, we’ve seen this before. We know the way the company works. Alright, we’re just kind of getting the smoke blown up to us. Everybody talked to us. Big E, Kofi, we just sat and we talked. They were like, ‘You guys are fine. Listen, it’s fine.’ It’s just the way things are type of thing. It’s a shitty situation. ‘Cause it’s just a different time in the world and it’s just shitty because we don’t want to be involved in it because it’s not our business. It’s our business to care for one another, but just keep your words to yourself at this time. Just stick to wrestling in that aspect. But, then again, like I said, you’re allowed to have your opinion. Then, I think, what was worse than the tweet was what resurfaced afterwards, but that’s his business, not ours. That’s where we were like, ‘Listen, this is how we distance ourselves. This is how we feel. This is us.’ Especially me in general, I wanted to distance myself as quick as possible because that’s just because not how I think.”

Steve Cutler Explains Why He Was Really Let Go From WWE, Details Call He Received From Mark Carrano About It