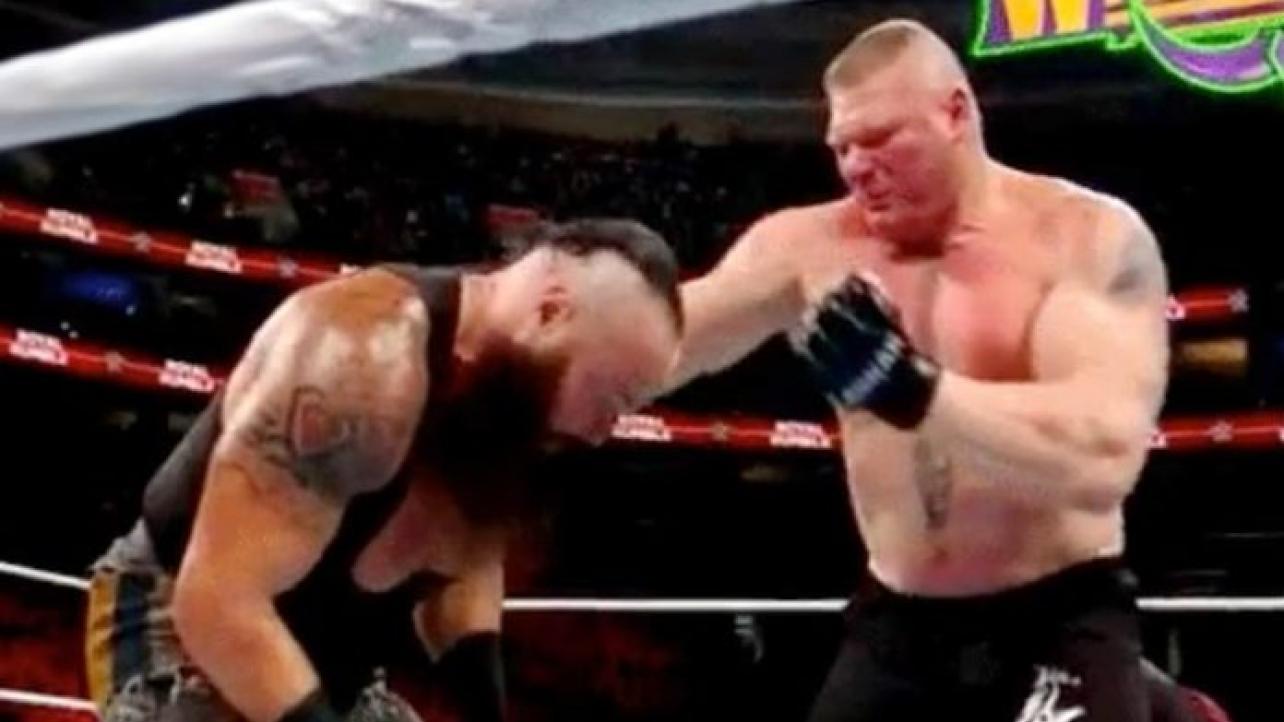 Strowman On Shoot Punches With Lesnar At Royal Rumble, Elias Bass Spot, Being “The Guy” In WWE

As noted, Braun Strowman recently appeared as a guest on Busted Open Radio with WWE legend Mark Henry and Dave LaGreca. Featured below are some of the highlights from the interview.

On the bass spot with Elias on RAW: “Inside, I was laughing (when the strings broke). It was a very fun segment and it was tough to keep a straight face. With the bass strings breaking and everything that happened, I had to play it up. That’s what I love about this. Our boss Vince McMahon and his mind… I’ve never seen anyone who was more creative like this. We’ve continued over the past year with the crazy stunts we’ve done, it was just like ‘what are we going to do to top this?’ Every time it just hits a home run with the crowd. Maybe I’m just lucky and in the right place at the right time, but I’m enjoying the process. It’s a fairy tale to me. July will be 5 years I would have been with the company and August will be 3 years since I’ve been wrestling. It’s still surreal to me.”

On what he hopes to accomplish in the Elimination Chamber this Sunday: “This falls under what I want to accomplish. I want to headline Wrestlemania. That’s a bucket list… That’s not even a bucket list, that’s something I’m going to do. I have an unbelievable opportunity to go in with some very talented men. It’s going to be a war, and don’t be surprised if you see the monster come out on top and go straight for the beast at Wrestlemania. I don’t think there’s anyone more than me who wants to knock him off his throne.”

On the shoot punches between he and Brock Lesnar at the Royal Rumble: “We’re two larger than life human beings trying to establish dominance, and people come to see a fight. That’s what we gave them. It was definitely physical, but look at the buzz it created. You hit me, I hit you back, and Brock is the same way. At the end of the day, the fans were pretty happy and excited to see an exchange of blows.”

On being “the guy” in WWE: “It’s been a shock, and not to sound over-confident, but that’s my mindset on life. I did the same thing in strongman. I trained for one week, won my first competition. The second I did was North America Strongest Man, finished 11th in the nation. Third was the Arnold Amateur World Championships where I finished 17th. I didn’t lose another competition for 2 years. That’s just how I am. I am so obsessed with being the best. I watch film, watch my matches back. I have busted my ass to get my body in the shape it’s in. I’m in the best physical shape I’ve been in my life. I may not be as strong as I used to be, but I’m also 70 pounds lighter than when I competed in strongman. My work ethic is second to none. I’m up every day, going to the gym when I can, taking care of my body. I’m going to be a WWE Hall of Famer. I can shout that from the rooftop and I’m going to do everything in my power to be because that’s something I really really want. It would feel so honored to leave a legacy of Braun Strowman where people would talk like Mark Henry, like Kane, like Big Show, like Undertaker. I’m the last of a dying breed. There are no more giants like us, and I want to keep that repertoire of what those guys before me have done. I want to keep pushing the envelope and evolving the sport. In this fast paced of wrestling where these cruiserweights and guys like AJ Styles and Shinsuke and Finn Balor who go out there and do crazy stuff, I’m trying to bridge the gap in between the big men and smaller men to make it unique.”

Strowman On Shoot Punches With Lesnar At Royal Rumble, Elias Bass Spot, Being “The Guy” In WWE