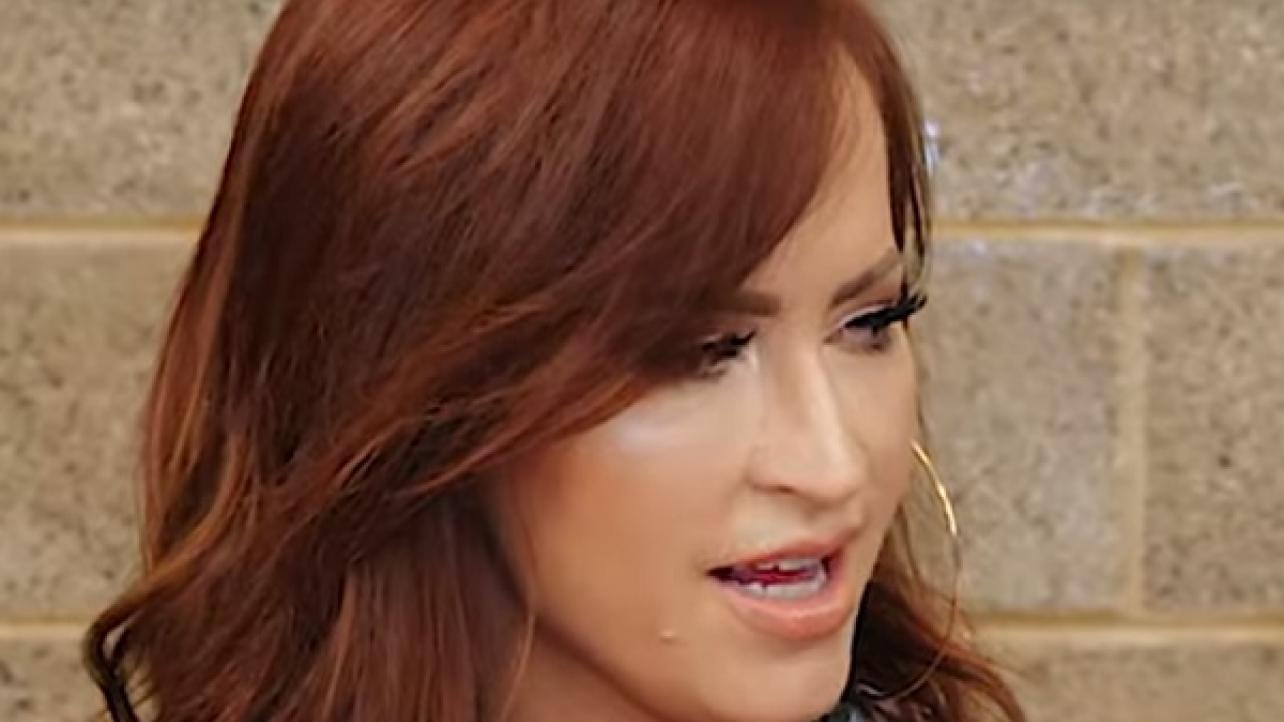 Former WWE Superstar and Total Divas cast member Summer Rae (Danielle Moinet), complete with a new look with red dyed hair (See Above) recently appeared as a guest on the Ring The Belle show for an in-depth interview about her career. Featured below are some of the highlights.

On slapping Natalya on Total Divas: “I love Nattie. I thought I was horrible and really mean on Total Divas. People that know me in real life know who I am, and know I would never do anything like that. But it’s your first season, and you gotta stir the pot! It was a scene heard from around the world. She’ll always be a worker. Nothing you do can ever offend her. I know if she called me fat, and I called her ugly and said something about her family she would never care ever. Like no one’s feelings would secretly be hurt, and there are girls in the locker room whose feelings would secretly be hurt. Nattie is such a worker, and she’s hands down one of my favorite people in the business.”

On WWE allowing her to write and cut her own promo on Rusev after their storyline was dropped following the TMZ leak: “I actually wrote the promo, and that’s never been said before. Higher powers were very upset [at the storyline dropping due to the leak]. They thought I was the one that would suffer most from this. So they just were like, you know it’s not fair. Would you like to write your own promo? I’m really proud of it. I wrote the whole thing, and it was easy to memorize because I wrote it. And I loved it. When I went in the back, it was like standing ovations. Stephanie, Vince, and definitely Armstrong, like everyone was back there. Everyone’s standing and I was proud of it. Stephenie even came out to me, and she was like, ‘that was a slap, girl!'”

On AJ Lee and Sasha Banks pitching to work with her: “Sasha loved working with me. She tried to get a storyline with me. AJ tried to get a storyline with me. AJ asked about me because we liked each other. She was cool even before (CM) Punk. Because of Chicago, we would all talk. But even before that, she just liked me and wanted to work with me. And she was so light, and I could just throw her around. So I loved working with her and Sasha. We had good chemistry.”

On rumors of Sasha Banks leaving WWE: “I don’t know about that! There were a lot of rumors about me going around, and like every girl on the roster. And everyone goes through things. I also like to stay off the dirt sheets. I think a lot of its hearsay.”

On pitching the reunion of BFFs on the main roster: “All the NXT stuff, I wish we had an opportunity on the main roster. I love the BFFs. I think that was great. We had so many ideas for making a sorority t-shirt like the Beta—I don’t know what F would be Greek—Making like shirts with Greek letters and selling them. And hazing girls like very old school, like Mickie James vibes. It was like a transitional time where now they bring NXT people up with their gimmick. But we were very much in that time that we just kind of got lost in the mix.”

On Layla attacking her with cat liter: “Cat litter is poisonous for humans and I did not know this. No one really told us, and no one switched it out. So I was like, I’ll take milk in the face instead. And then Lela just kind of went for it [with the cat litter]. So I just remember going the back and, like we’re cool. Let me take a shower. Actually, I was on TV, I was on Smackdown. So I had to go shower and get ready like within like 30 minutes. I had to wash my hair and everything.”

On a potential wrestling return and not burning a bridge with Vince McMahon or WWE: “If I ever returned I’ll be in Chicago, spoiler alert. […] As long as Dusty Rhodes is happy, that’s all that matters. And Vince loves me. I love him. I’m a Vince girl. So we’re all on good terms. I would never burn a bridge.”

For the complete Summer Rae interview, featuring her showing off her new dyed red hair, from the Ring The Belle show below.