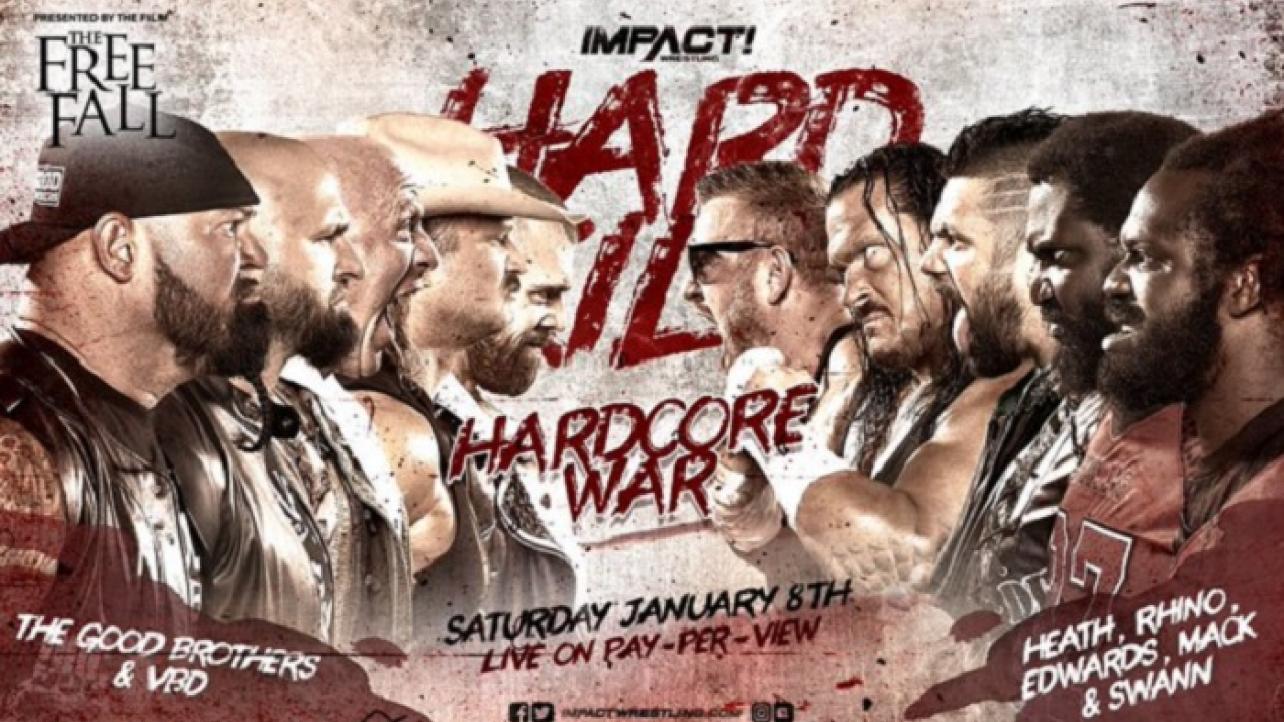 More matches have been announced for the IMPACT Hard To Kill 2022 pay-per-view scheduled for next month.

This week, IMPACT Wrestling announced the addition of a “Hardcore War” at the aforementioned PPV event, which emanates from Gilley’s in Dallas, Texas on January 8, 2022.

Regarding the “Hardcore War” ten-man match, IMPACT wrote the following in their description when announcing the bout:

“Brace yourself for a Hardcore War LIVE January 8th on pay-per-view! Violent By Design always has a plan and this one may have been the most nefarious of them all. After the group led by Eric Young formed an unholy alliance with IMPACT World Tag Team Champions The Good Brothers, they didn’t waste any time in attempting to eliminate their competition in the tag team division, Rich Swann, Willie Mack, Heath and Rhino. But there to even the odds was IMPACT’s resident guardian, Eddie Edwards. Now the two armies turn their attention towards Hard To Kill where they will collide in a match with no disqualifications, no count outs, plenty of weapons and anything goes! Who will declare victory in Dallas, Texas?”

Also confirmed for the 1/8 PPV in Dallas, TX. is an IMPACT Knockouts Tag-Team Championship showdown, with The IInspiration defending their titles against The Influence.

With that now known, featured below is a look at the updated lineup for IMPACT Hard To Kill 2022:

Make sure to join us here at eWrestling.com on 1/8 for live IMPACT Hard To Kill 2022 results coverage from Dallas, TX.

LIVE at @thefactoryDE in Dallas, Texas!

IT IS HAPPENING.
.@IMPACTWRESTLING pic.twitter.com/aci54aDXyr

The next chapter in perhaps the most intense rivalry in Knockouts history will be written at #HardToKill and it will now be a Texas Deathmatch!@MickieJames vs @DeonnaPurrazzo for the #Knockouts Championship
LIVE at @thefactoryDE in Dallas, Texas!
TICKETS: https://t.co/Ijd0hGrl2t pic.twitter.com/jHG5P4QffU

Can @TheMooseNation escape Dallas with his gold intact? Will @TheMattCardona prove to the world that he’s main event material? Will @TheCaZXL take his place at the top of the mountain? Find out at #HardToKill LIVE at @thefactoryDE in Dallas, Texas!
TICKETS:https://t.co/Ijd0hGrl2t pic.twitter.com/1S6XNiUBpD