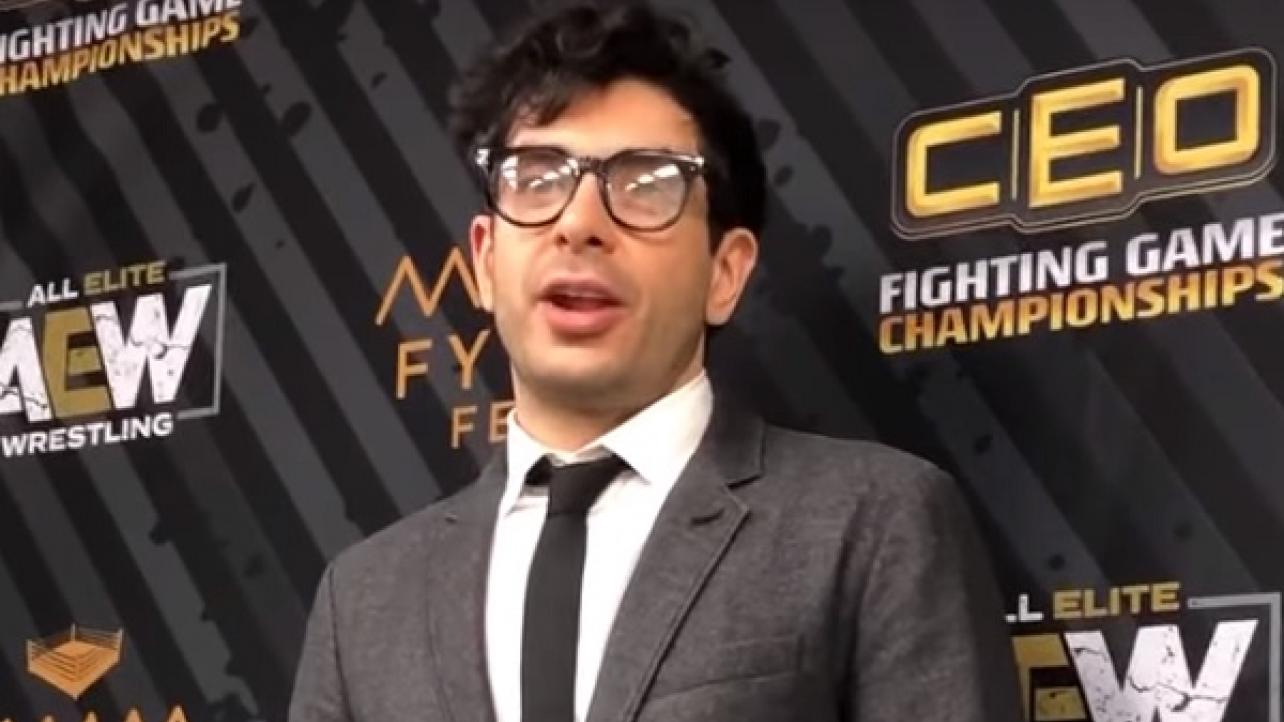 Tony Khan On Reaction To Cody Chair Shot, How AEW On TNT Will Differ From PPVs (Video)

Among other topics, Khan discussed the reaction behind-the-scenes to Cody getting badly busted open from an unprotected chair shot (Watch Video Here), Kenny Omega being “super-involved” with putting together the women’s matches in AEW, how the AEW on TNT weekly television show will differ from shows such as Saturday night’s AEW Fyter Fest and last month’s AEW Double Or Nothing, plans for the upcoming AEW All Out pay-per-view in August, why intergender wrestling will not be featured in AEW and more.

Check out some of the highlights, as well as a complete video archive of AEW President & CEO Tony Khan’s post-AEW Fyter Fest media scrum below.

On how the AEW creative team has evolved: “Since inception, it’s been a committee. I think a lot of wrestling companies probably function with one person who at the end of the day has to make calls and go over everything. But we’re a bunch of people working together, we have a system. We have a group of coaches who go through each match, and every match has a coach.”

On how Kenny Omega is super involved with producing the women’s matches for AEW: “We have Executive Vice Presidents who creatively are working together on everything, but not everybody is necessarily working the same amount on everything. For example, Kenny Omega super involved and personally coaching the women’s matches. I’m going over everything with everybody to some degree. So, yeah, it’s a committee and we have a lot of people that are really involved in different levels.”

On intergender wrestling not being featured in AEW: “You probably won’t see it [intergender wrestling] in AEW. I’ll just be super frank about this, if there was one thing… a bunch of you guys were at All In. In the battle royale does anybody remember when Jordynne Grace got hit in the face? That was probably the one thing I didn’t like about All In. I didn’t like when Jordynne Grace got hit in the face. And I don’t think that’s cool. I’m really against, you know, domestic abuse. And I’m not saying that it is. It’s a really complex question, I knew it would come up sooner or later. It’s probably not what we’re going to do. And we’re going to focus on a men’s division, singles and tag, and a women’s division, singles and tag, and have those divisions. Could there a mixed division somewhere later? I don’t, I haven’t thought that much about it. Mixed matches are probably not what we’re going to focus on.”

On whether or not the AEW weekly television show will be as violent as some of the action featured at AEW Fyter Fest: “No, definitely not. This was not TV, this was a streaming show. It was effectively a pay-per-view in a lot of the world, in the US it was presented free, but it was a pay-per-view. So you can expect different rules for pay-per-view. And we said going in, these are non-sanctioned, hardcore matches. And I think that was the expectation going in, and we wouldn’t have advertised that kind of violence. We wouldn’t have offered that on TNT, 100% no.”

On match stipulations and plans for the upcoming AEW All Out PPV in Chicago this August: “It depends on the show. This is a special show. I think you’ll see more stipulations on pay-per-views and streaming specials. And I think [with] the TV show, you’ll probably see more straight wrestling matches and less stipulations. So this was the kind of format [we’ll use] and at All Out we’ll see some stipulation matches, for sure. We have some really exciting stuff planned for All Out. And I think in that element you’ll probably see more that you will in our weekly two-hour television show.”

On talks about the precautions AEW took after Cody was busted open hardway by an unprotected chair shot by Shawn Spears at AEW Fyter Fest: “We called a doctor immediately. Obviously really regrettable what happened. I don’t know if this is the time to go into detail about what happened, but we had taken precautions in this situation and that specific situation. A doctor was available and Cody does not have a concussion. [He only had to get some] staples and we’re all very grateful for that.”

Tony Khan On Reaction To Cody Chair Shot, How AEW On TNT Will Differ From PPVs (Video)