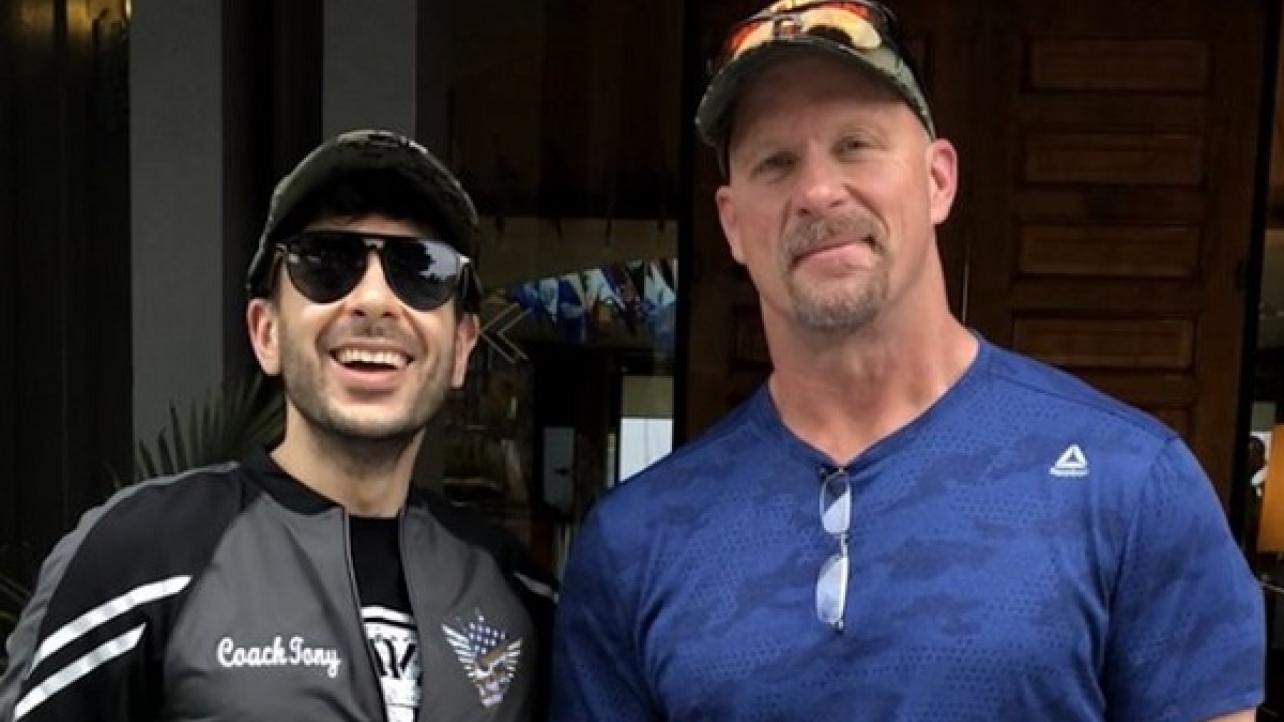 – Tony Khan took to social media on Tuesday to comment on his recent appearance on the return edition of WWE Hall Of Famer “Stone Cold” Steve Austin’s podcast, The Steve Austin Show. The AEW CEO / President wrote about the business success of AEW’s Double Or Nothing pay-per-view and what praise from “The Texas Rattlesnake” means to him. Check out Khan’s tweet, which includes a photo of himself with Austin after they recorded the episode, below.

Thank you @steveaustinbsr for having me on your show. Everyone at @AEWrestling worked hard to make Double or Nothing a success; we did big numbers thanks to our great fans + the fact Steve Austin loved the PPV, to me that’s the highest praise you can get in the wrestling business pic.twitter.com/hPOjbIGSkl

– This week’s episode of the Grilling J.R. podcast with Jim Ross and Conrad Thompson will focus on “Good Ole’ J.R.’s” friendship with late WWE Hall Of Famer “The American Dream” Dusty Rhodes. The show will be available at WestwoodOnePodcasts.com on Thursday morning at 6am Eastern Time. Jim Ross, as well as the official Twitter page for the podcast posted the following tweets to hype this week’s show:

Coming Thursday morning at 6 ET from @WestwoodOne@iTunes@ApplePodcasts@Spotify & where ever you grab your audio.

We explore a 30+ year friendship. pic.twitter.com/oARILLJdXk

– Also new in the podcast world is the latest edition of Chris Jericho’s Talk Is Jericho podcast. The show, which is titled, Banned! The Stomping Grounds Preview WWE Does NOT Want You To Hear! was released at Omny.fm on Wednesday morning. The official description of the show reads as follows:

“Ummmm… have no idea what to even say about this one (except that the WWE may NOT be the reason why these two are banned!). There may or may not be some predictions about real (and not real) WWE Stomping Grounds matches, and Baron Corbin’s guest ref pick. There’s definitely a whole bunch of other nonsense about #PhatGirls, click bait, WAR in Japan, Enzo Amore, a text from Richochet, Bayley (not the one from Iron Maiden), Dark Journey, Sami Zayn’s mother (apologies in advance), the mythical Stevie Nicks, and guys whose names start with the letter E. Pretty sure you can vote for a theme song for the Stomping Grounds PPV on twitter @TalkIsJericho (there are 4 ridiculous options to choose from). And please keep in mind that the stuff that Jack’s lovely British Alexa can’t answer is no reflection on her programming or the technology itself! In fact, she’ll absolutely respond correctly to “Alexa, play the latest episode of Talk Is Jericho.” And to think… there was absolutely no alcohol involved in the making of this episode. #Truth #PodcastProducerNeedsAShot”

Check out the complete episode below.