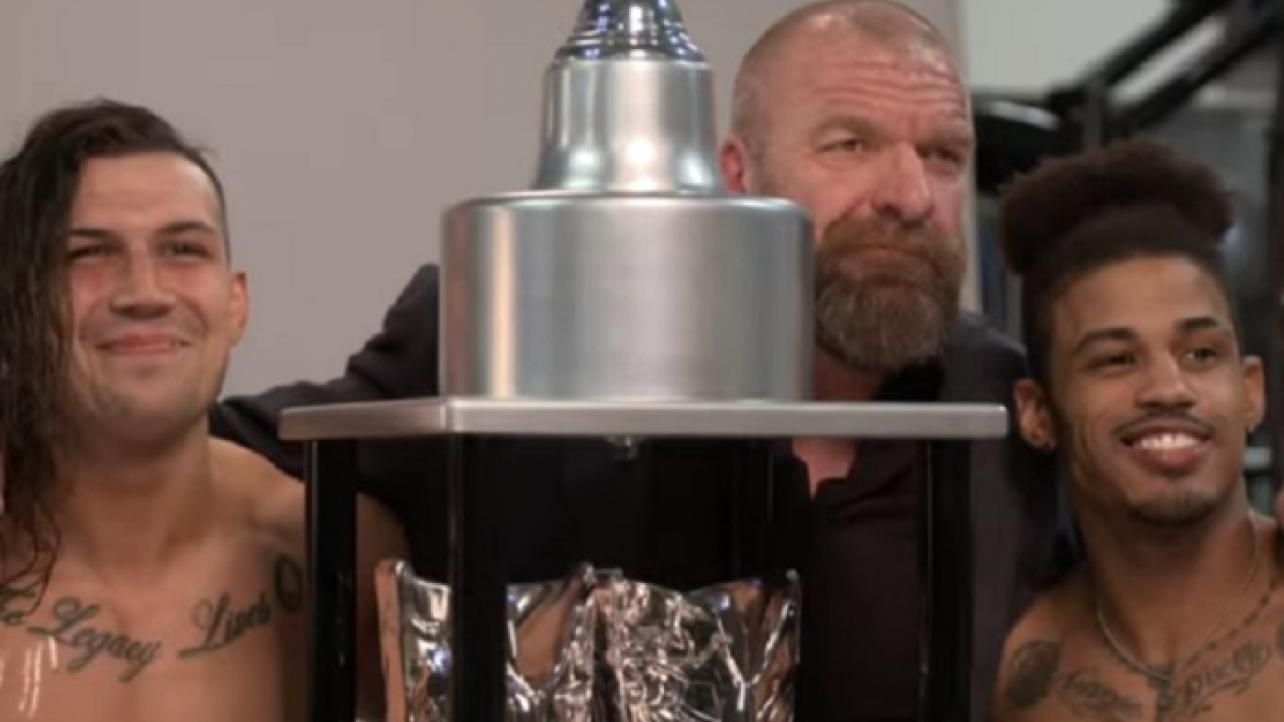 After the team of Raquel Gonzalez and Dakota Kai defeated Shotzi Blackheart and Ember Moon in the opening match at Sunday night’s WWE NXT special event at the Capitol Wrestling Center in Orlando, Florida, “The Godfather Of NXT” posed backstage while the winners took part in a photo shoot with the Dusty Classic Cup trophy.

Additionally, “The Game” took to social media to comment on the big victory for Gonzalez and Kai in the first-ever NXT Dusty Rhodes Women’s Tag-Team Classic Tournament.

“…High-flying….Hard-hitting….and HER-STORY making,” wrote Triple H, with a play-on-words with ‘History’ and ‘Herstory,’ before adding, “An unbelievable start to NXT TakeOver. Congratulations to Raquel Gonzalez and Dakota Kai, the FIRST-EVER Dusty Classic winners!”

The WWE Executive Vice President of Global Talent Strategy & Development also hopped on Twitter to congratulate MSK and The Grizzled Young Veterans for their efforts in the NXT Dusty Rhodes Tag-Team Classic Tournament for the men’s tag-team division in WWE NXT after posing with MSK during their post-match photo shoot backstage at the CWC with the Dusty Classic Cup trophy.

“Both MSK and The Grizzled Young Veterans are true tag teams,” wrote Triple H via his official Twitter feed in regards to the men’s NXT Dusty Classic tourney finals at NXT TakeOver: Vengeance Day. “They work together, they rely on each other, they WIN together… they lose together.”

He added, “This year’s Dusty Classic has highlighted just how good this division is and the level you to need to perform at to have your name on that trophy.”

Watch the aforementioned footage of Triple H backstage at the Capitol Wrestling Center in Orlando, FL. with the winners of the respective NXT Dusty Rhodes Tag-Team Classic Tournaments after the NXT TakeOver: Vengeance Day 2021 special event on Sunday night via the videos embedded below courtesy of the official WWE YouTube channel.

Also embedded below are the tweets referenced above from the official Twitter account of Paul “Triple H” Levesque.

For those who didn’t catch the special event on Sunday night, fear not, as you can check out our complete recap of the WWE black-and-gold brand show by reading our detailed NXT TakeOver: Vengeance Day Results From Capitol Wrestling Center In Orlando, FL..

…High-flying.
…Hard-hitting.
…and HER-STORY making!!!! An unbelievable start to #NXTTakeOver. Congratulations to @RaquelWWE and @DakotaKai_WWE, the FIRST-EVER #DustyClassic winners! https://t.co/CMaR3GM8KQ

Both #MSK and #GYV are true tag teams. They work together, they rely on each other, they WIN together… they lose together. This year’s #DustyClassic has highlighted just how good this division is and the level you to need to perform at to have your name on that trophy. https://t.co/6uLBBbonEo