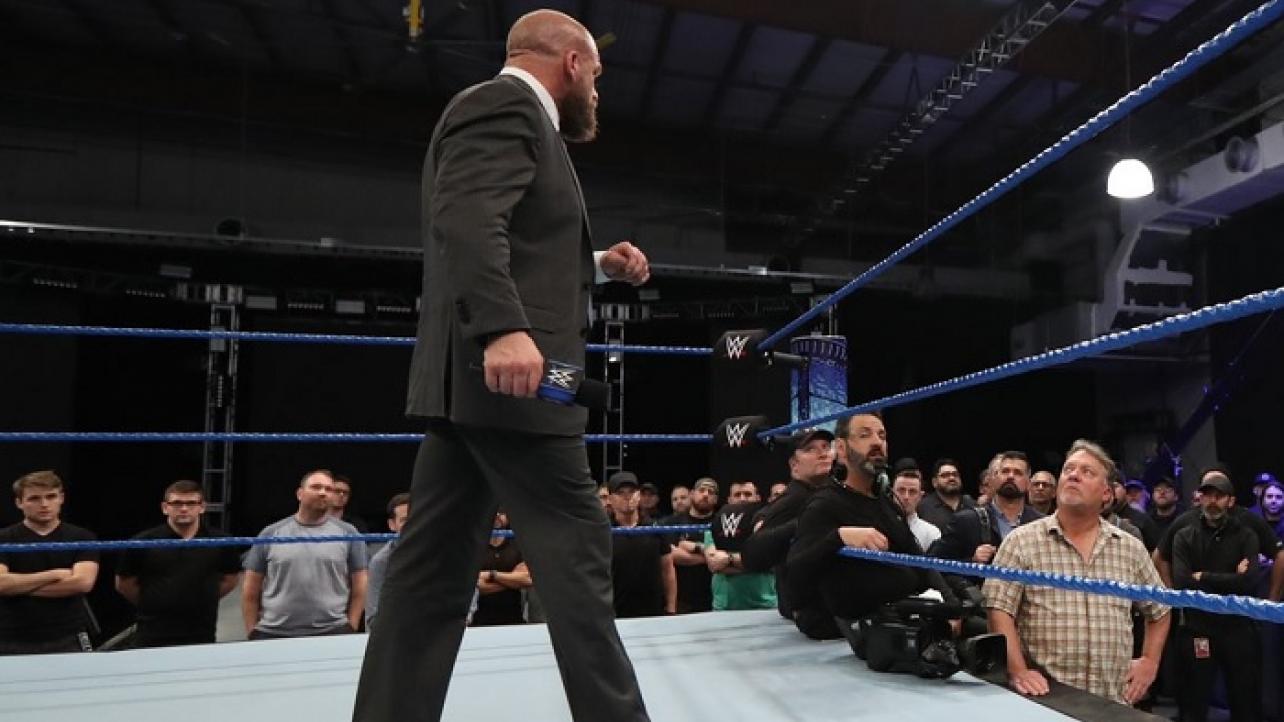 Triple H On Memorable Empty Arena Friday Night SmackDown Show: “It Brought Together Everyone At WWE For YOU!”

Paul “Triple H” Levesque, who wears more hats than any one human being should already, threw a couple more hats on last night to ensure the special empty arena episode of Friday Night SmackDown from the WWE Performance Center went on the air as scheduled.

After being moved from the Little Caesars Arena in Detroit, Michigan on short-notice late this week, WWE scrambled to produce and broadcast their live, weekly WWE On FOX blue brand show from their own developmental training facility in Orlando, Florida.

Triple H was apparently largely responsible for helping get the show up-and-running this week, as the WWE EVP of Global Talent Strategy & Development worked as one of the announcers alongside Michael Cole for the empty arena broadcast from the WWE Performance Center.

Following the show on Friday night, “The Game” took to social media to comment on the extra effort that was put forth by the limited WWE crew at the WWE Performance Center to ensure the show was properly produced despite the unique conditions they were left with as a result of the Coronavirus (COVID-19) Pandemic.

“Tonight was an effort that brought together everyone WWE so we could go on air and entertain our most important constituency … YOU,” wrote the WWE EVP after Friday Night SmackDown went off the air this week.

“Thanks for letting me get my hands (and Michael Cole’s facial hair) dirty,” Triple H concluded in a statement released via his official Twitter feed, which also contains some behind-the-scenes photos from this week’s taping.

Check out the photos and comments posted by Triple H after this week’s memorable empty arena edition of Friday Night SmackDown from the WWE Performance Center below. For additional exclusive behind-the-scenes photos from the taping at the WWE PC on Friday, click here.

Congratulations to everybody who worked so hard to make tonight’s #Smackdown come to life! From our crew to the @wwe superstars to the team at the PC, it was awesome! I especially liked that new announcer, @TripleH, he was a cameraman too! Like the man said, we do it all for you! pic.twitter.com/3cbHCGV44B

How am I doing?? #Smackdown pic.twitter.com/4dJwi01pvs

Tonight was an effort that brought together everyone @WWE so we could go on air and entertain our most important constituency … YOU.

Thanks for letting me get my hands (and @MichaelCole’s facial hair) dirty!!! #ThankYou #Smackdown @WWEPC pic.twitter.com/HslV2or7El

Triple H On Memorable Empty Arena Friday Night SmackDown Show: “It Brought Together Everyone At WWE For YOU!”