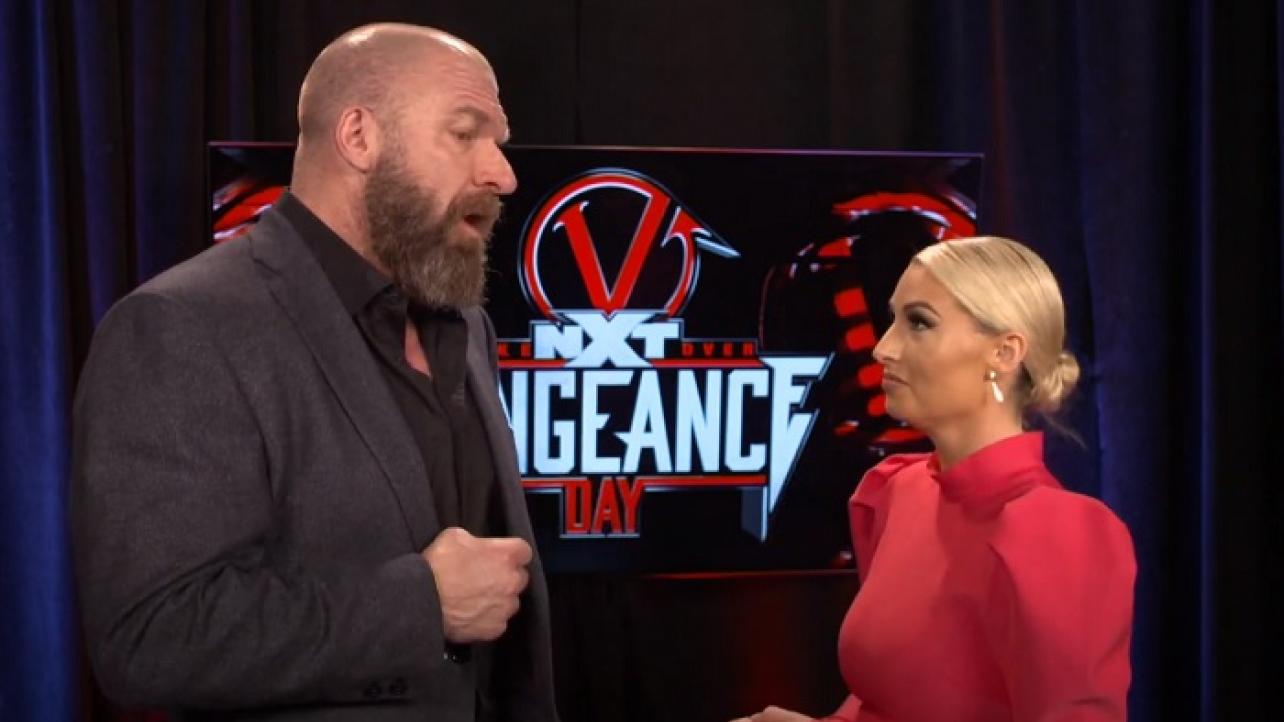 The following recap was written by Mike Johnson of PW Insider:

He said he thought they had an amazing show tonight. He would be correct. He said you could look at every match on the show going in and think that would be the bout that stole the show – and nothing disappointed.

He said he takes the Dusty Cup very serious. Dusty was a creative partner for HHH here and a mentor in a lot of ways. He takes it very seriously that his name is on it. It wasn’t a case of just throwing his name on something, He puts a lot of value in that and tonight they had four different teams competing for a Cup with his name on it and he doesn’t believe Dusty ever met any of them. His legacy gets to be carried on among young performers. The women’s Cup got to make history tonight. All four made history with their performances. MSK vs. YGV was a master class in tag team wrestling.

HHH put over the other matches on the card. He said Balor vs. Dunne was off the charts in terms of technical ability. Only certain people can really appreciate that and he does but inside the technical wrestling was a master class. They got to showcase new faces like Eli Drake as LA Knight and a new direction for Cameron Grimes. He felt like they were back to the beginning for the brand.

He said he believes they were 100% injury free tonight.

They went to the questions.

HHH was asked about the Women’s Triple Threat. He said they had a window that was much longer than the 12-13 minutes they did. They laid it out for 20 minutes. There were a few things that didn’t go exactly as planned and he doesn’t mean mistakes but tables breaking and things happening beyond their control that leads them in other directions. He said that sometimes people get caught up on matches having to go 20 minutes but if everyone does that then you always expect them to do that. He praised Io Shirai for what she brings to the table and showcasing all the different sides of herself and always pulling something new out. It’s hard to put into work what an incredible versatile performer she is.

HHH was asked about whether there’s changes to how talents are evaluated and signed. HHH said that it depends on the performer. Some come in and go right up to the main roster. Some come in and stay. They give them bits and pieces of opportunities. You bring talents in with a thought in your mind – like MSK, who are really good performers but you don’t know everything they can bring or are ready for. As you see what they can do, you tweak those ideas and plans. MSK are sponges and have knocked their opportunities out of the park. Some times talents get it and some times they don’t. He’s worked with talent who have been on TV for years and when you begin to talk to them about TV production, they don’t know what you are talking about as they were never taught. They were just lucky or were in the right place at the right time and they have to learn. Sometimes, it’s easier to have a blank slate vs. someone who has been doing something for 10 years. Everything depends on the performer. When they get here they start to try and do things in bits and pieces here and how they adapt or react to it, that will change how they are used. People walk into a place they have trying to get into a place they have wanted to be all their life – when they get here, how they handle it will depend on how they progress. They sometimes give a version of themselves and now the real them and when light bulb goes off, then they can see how they go. He wants them to success at their best.

He was asked about Eli Drake coming on board. He said there’s no feeling on anyone. They evaluate them after they come in the door. He wants everyone who comes here to have the potential to garner everything they need to succeed. He was a fan of his work and promo skills the first time he was in NXT and his journey after. When the time was right, phone calls were made, there were interest on both side and it was smooth and easy. He wants to be where they have the biggest platform for him and there’s “no ceiling” for him.

He was asked about the table collapsing during the NXT Women’s title bout. HHH said they didn’t miss a beat, they are pros and they went right on. He said that sometimes, stuff happens and you have to roll with the punches. No matter what you do, things are never going to go as they are planned unless you are extremely lucky. The best performers are the ones who can ad lib on the fly. If something goes awry, it can be really hard to adjust, but they did it really seamlessly. In the moment, you can’t do anything about it but you wish you could do everything you can to prevent it from happening. They are pros and they move on.

HHH was asked if they are going to have any changes for Takeover with the Peacock deal. HHH said the content and delivery of content won’t change. There could always be more or less but they always evaluate and that’s never going to change. Peacock brings them a lot of potential eyeballs.

HHH asked about the job of the current commentary team. HHH said Mauro Ranallo was phenomenal. Circumstances were right for both sides in the pandemic world for everyone to go in the direction they did but HHH is a fan of his across the board. He said they stay in touch and he’s a good friend. He said that the dynamic of Vic Joseph, Wade Barrett and Beth Phoenix is really coming into your own. Vic has been trying to find his voice in the middle of the pandemic. Sometimes, you had people doing things from their homes live but it’s a hard, very difficult process. He said that he loves that the team come across like three friends who genuinely love each other having a good time bantering with each other. They are enjoyable and fun and get into the product. It’s a different vibe from Raw and Smackdown.

HHH was asked about how MSK adapting to NXT and being on TV in such a short amount of time. He said the second he met them when they had a tryout with WWE, everyone on the team – all the Coaches – he trusts their opinions, so when everyone says they are a pro’s pro and they are sponges. Part of being coached is wanting to be coached. He said that sometimes you hear someone doesn’t need to be coached or they should be left alone to do what they can do and he can’t disagree with that more. When Vince McMahon was in a scene years ago, he wanted someone else to produce and coach him. To do otherwise is just ego. Not every opinion you will get is right but to take them on and try them and see what works best – that’s MSK. They were given a whiff of an opportunity and they grabbed it and they’ve been fresh air. He praised the tag division in NXT currently. He said you look at the division and you say that you’ll take any one of those guys.

The last question asked about Latin talents on the brand and how close we are from seeing an NXT Latin American brand. HHH said they have some next level talent and began naming talents from all three brands. He said that they absolutely could be right for a Latino brand but the circumstances have to be right and so does the world. He said the pandemic is a problem obviously but as we’ve seen with Superstar Spectacle, the goal is specialized, localized programming. There are massive opportunities but they have to do when the circumstances are ready and correct, not just do it to just do it.

For those who didn’t catch the special event on Sunday night, fear not, as you can check out our complete recap of the WWE black-and-gold brand show by reading our detailed NXT TakeOver: Vengeance Day Results From Capitol Wrestling Center In Orlando, FL..