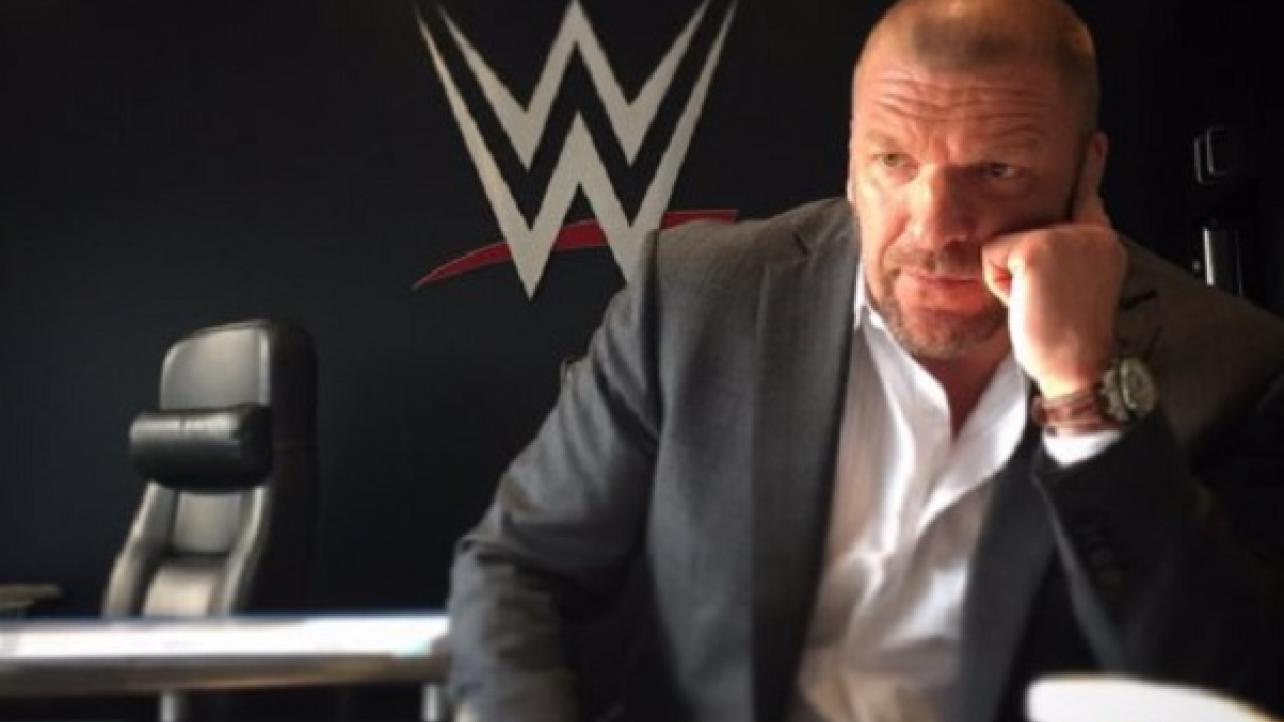 Adam Hopkins welcomed us, reminded us that tickets for WrestleMania go on sale tomorrow (actually today) and turned the call over to H.

H addressed his pec surgery. It’s been a week and it went well. Now, it’s just rehab, rehab, rehab. The machine keeps rolling though so he is headed to LA tomorrow for NXT Takeover: War Games. He is excited for the event, and mentioned Dusty Rhodes and War Games. This year people will see that is going to become an epic yearly event. He is excited for the talent in the main event and made the case that any of the matches could be a main event.

H previewed Saturday’s lineup, which is a strong one. Announced for the show are the following matches:

He is excited for the card. When you look at the roster, it has reestablished itself and is firing on all cylinders. He ran down a list of great talents that are NOT on the show, pointing out how loaded the NXT brand is right.

He is also very excited with NXT UK and more will be coming next year.

The first caller was Brian Fritz. H, Adam and Fritz were shocked it wasn’t Mike Johnson. Fritz was allowed to do a victory lap. Fritz asked what they learned from last year’s War Games and asked what they would do differently.

H said that this year’s show is a little more traditional. He was thrilled with last year’s match. They took a great concept and modernized it for today. Last year proved that it can be a very exciting format that showcases talent. H is excited about what they did right last year. He thinks everyone enjoyed it last year and they will this year as well. It will be a brand going forward.

He was asked to critique that rapid rise of Velveteen Dream.

He said that what he loves about the PC is the ability for the talent to get the messaging and also understand it. He said that the talent is able to be a sponge and take what they are taught and put it into action. Dream is really great at that. He gets it. Pete Dunne as well. Talents that take the coaching grow quickly.

Mike Johnson was next. H said that he was fearful that Johnson would drop further down. Mike said he never liked that Fritz guy. Adam said that Fritz called in at 8:30 last night. They joked about it.

Mike asked what kind of international push is ahead for NXT.

H said they are making progress on it every day. The tryout in Germany went very well. They had a lot of strong prospects. The ability to build a worldwide pipeline where talents, in essence, don’t have to work indies where there aren’t doctors, good conditions and sometimes even paydays is important to the process. Long term H wants an NXT system/pipeline around the globe. It’s good for the talent and good for WWE. They are getting farther and farther down that road. He said that he doesn’t think it will be that long. Early next year they will be making announcements that he thinks people will find to be strong.

Mike asked about the other Horsewomen appearing with Shayna. Will that continue?

H said they have a relationship and he thinks it will play out. The two are new to the business so we will see where it goes.

Jason Powell asked if the goal of NXT is still to move talent up to Raw, or will some talents be top guys and stay in NXT.

Will there be more Takeover specials? Will the time block stay the same?

H said it’s supply and demand. He is not a big fan of giving more just to give more. He thinks they are in a sweet spot time wise now. It ends with the crowd wanting more, not fatigued. He said that does envision some larger events in the UK. We will see what the magic number is going forward.

Dave Meltzer asked why they are only doing four matches Saturday instead of five?

H said that War Games takes a lot of time. It needs more time. When they were planning, what they did at Evolution affected this card. The Title match is now two of three falls. So that needs more time. They milled it around and decided what they thought was best. They could add another match, but then the show could run long. The braintrust agreed that the four matches was the way to go.

He was asked what the plan for the UK is, show and touring wise.

For him, he would like to do there what NXT is doing here. Now that it’s on TV there, it’s about creating demand. People are happy with it so far so he wants to get where there is demand for the live events, as opposed to just running them to run them. He has no doubt that the day of live events is coming. They will start it slowly and build it up. The goal is to replicate there what they do here.

He was asked about touring in 2019. Will UK guys come here?

H says we will see them Mania week. We will also see talents go there and come here throughout the year, like Pete Dunne does here. H would like to increase the actual schedule to more dates. They work too hard to do double shots though. He wants to add in larger events, not necessarily Takeovers. Maybe do non-Takeover shows for the Network.

He was asked where to draw the line between the financial side and the show quality side?

H said you have to look at it from many ways. It’s a feeder system and there are costs there. He mentioned Braun Strowman, who never worked a match before coming in. That value is incredible and it’s hard to know who will be the next Strowman when you bring them. So there is a cost to that. But then when you take the talents you have and make money on shows, it’s gravy. He said that they make money on the road touring. You have to factor all of it in when you consider it.

H was asked about WWE changing their philosophy of hiring people in their 30s to come in.

He said that they never had a hard and fast rule about age. He said that when it comes down to it, there aren’t many people in their mid thirties that they see will have that long of a career. Sometimes they bring in older people for a short run and then move them to the off camera side of the business. There are a lot of factors that go into it. Sometimes he takes a chance on talent to see if they can pan out as a worker because even if they don’t, he sees other roles for them.

He was asked who the people at the PC who go above and beyond to help talent and would we see another Breaking Ground?

H said he loved that series and would love to do it again. They learned a lot from it and how to do it better. He hopes it comes back down the road.

He said that one of the things that they have hit on with the Center is that teams from pro sports come in and check out what they are doing to look for ideas. The one thing that they always get compliments on is the culture. The one thing he will not allow is someone to come in and upset the culture. It’s a team atmosphere and as talents move up, they help those that are on their way up. That is the culture that they have created. It’s a trickle down system. The top stars learn from Sara Del Ray and Shawn Michaels, and then they pass it down. That is the secret of the success.

The last question asked how far the Undisputed Era can go.

As far as they want. They all get along. They are close and think similarly. They have a connection and it plays off well. When they are on screen together it’s authentic and that comes across. For them as a group, it can lead to wherever they want to be. He said that he hears people saying that they want make it to the top due to size but he doesn’t agree. If the fans want it, it can happen. He said that they have all grown and gotten better so War Games will be spectacular.

H said that he appreciates us coming and they will be doing a post show press conference after War Games.

Make sure to join us here this Saturday evening for live play-by-play results coverage of the NXT TakeOver: WarGames event.