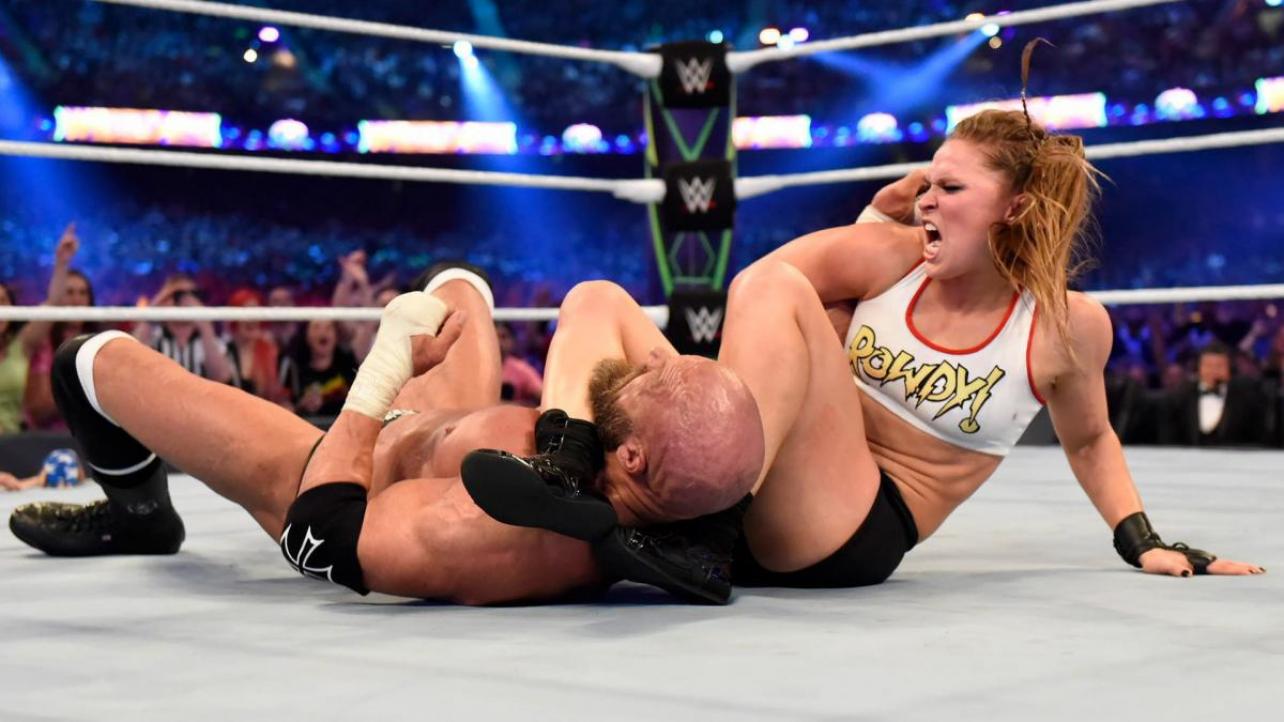 Triple H recently joined ESPN’s SportsNation, where he discussed his mixed tag team contest, at WrestleMania 34. Triple H teamed with his wife Stephanie McMahon at the event, and took on the team of Kurt Angle, alongside Ronda Rousey.

“The King of Kings” kicked off the subject by talking about the specifics of the match, which he called “surreal”. Triple H explained:

“That was surreal. The whole build on the Ronda thing organically got to a place where – it was something she really wanted to do from the very first moment I talked to her was something with Steph. You include Kurt Angle in there, so now you have this Olympic Gold Medalist and one of the greatest guys in the business who I love working with. You want to make sure it’s right for him. It’s Ronda’s first match ever, and Steph has had a limited amount of matches. We’ve never wrestled at WrestleMania together in this capacity, so us having a match together at WrestleMania was epic in and of itself. And Steph and Ronda – I have a very strong relationship with Ronda. It’s a very business relationship. But Steph and Ronday, sometimes I feel like they’re sisters. They talk all the time. But it’s Ronda Rousey, and she is the premier ass-kicker on the planet”.

“The Game” also took the time to give an in-depth look at the training routine Stephanie and Rhonda had. Triple H talked about the “physically exhausting” sessions, and told SportsNation:

“Steph, she trained like a demon for this thing. When you’re a mom of three – that’s a full-time gig – and on top of that, an executive and doing all your day-to-day, 24/7s getting read for WrestleMania and then training twice a day, it’s physically exhausting yourself to that point. Then when we started getting ready for the match, as we’re putting it together and training in the ring with Ronda, Steph and Ronda are in there beating the tar out of each other – mostly Steph getting the tar beat out of her every day. I would look at her somedays and she’d have bruises all over her just from Ronda’s punches. But she was loving it and having a blast. It was an intense for her. She worked so hard, and the two of them just killed it. I’m glad for Kurt it was an epic moment, and the whole thing was an epic moment. I’m glad it worked out well.”

The WWE Hall of Famer, as well as Second Grand Slam Champion, wrapped things up by talking about his favorite moments from the match. Triple H told viewers:

“One of the coolest things for me – standing side by side with Steph doing the water spit. We got to WrestleMania, and she was like, ‘How do you do that?’ We had to go out there and practice it, and the first time she was terrible. Doing that live at WrestleMania with her was one of the coolest things ever. And then there’s a moment in there where she tags in and Ronda tags in, and you know this thing is going into fifth gear. But I’m just sitting there watching with so much pride and watching her and Ronda tear it up and knowing what this is for both of them and thinking, ‘I hope Steph survives this.’ In that moment, I was just the biggest fan of both of them.”

Kurt Angle and Rhonda Rousey won the match, after Rousey forced Stephanie to tap out.

What do you remember from the match? Sound off in the comments section!