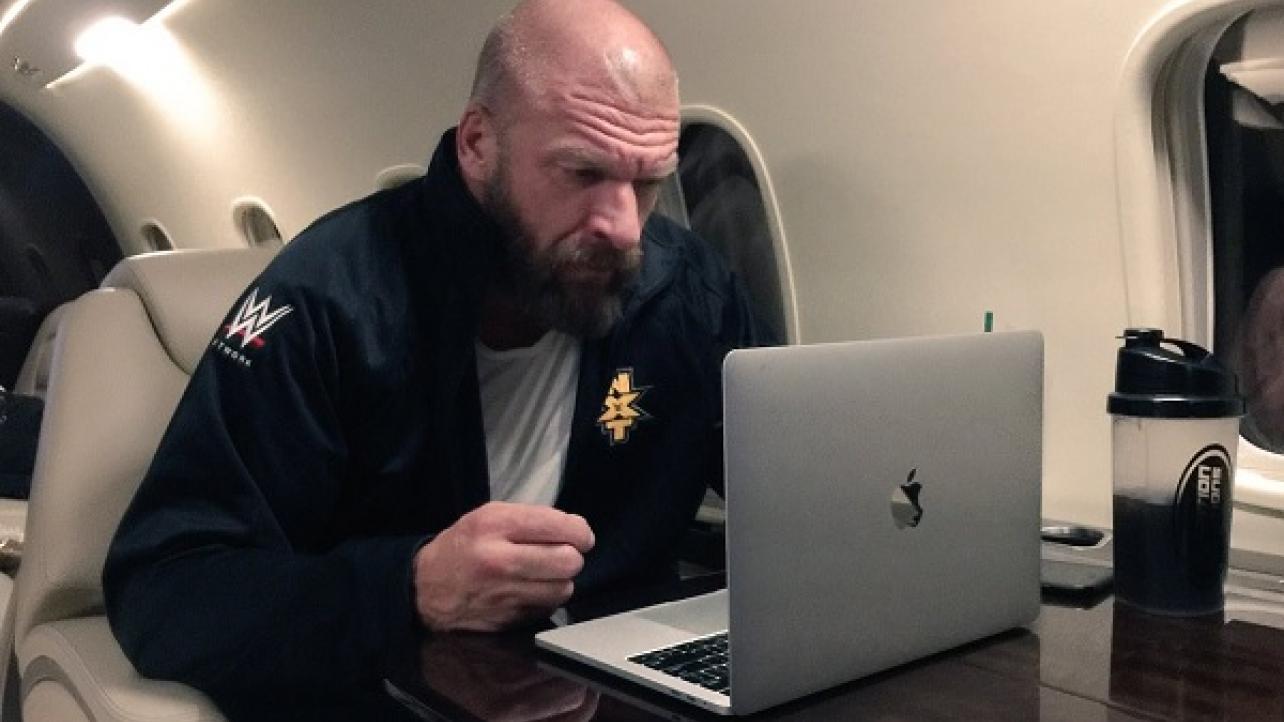 Triple H took part in a conference call after the NXT TakeOver: WarGames 2019 special, making some newsworthy announcements regarding tonight’s WWE Survivor Series and recapping all of the news and notes coming out of Saturday night’s live NXT special.

Featured below, courtesy of PWInsider.com is a recap of the call:

Triple H said it was an ultra-successful Wargames and month and a half for WWE NXT as a brand. He said they’ve been knocking it out of the park every week and the brand has been doing triple-duty. He felt the show was spectacular top to bottom.

On the injury front, he said they’re all healthy, give or take.

He noted they’ve had a few Takeovers in this market and this was highest grossing one in Chicago.

He said that these talents are Iron Men and Women. If he was young, a weekend like this as a wrestler would be the be all, end all. It’s the ultimate challenge of being able to prove and when they look back they are known as the ultimate men and women.

Shawn Michaels will announce the NXT Men’s Team tomorrow during the Kickoff show. Part of it was due to creative but they also wanted to make sure everyone came out of tonight injury-free. Anything can happen and he was holding his breath until the show was over. It was a risk/reward deal and they wanted to wait until tomorrow to announce the Men’s Team.

He repeated the announcement of Rhea Ripley’s team for tomorrow. He said that it’s hard not to say it’s not the deepest team of the three brands competing in that match tomorrow.

He said that he accidentally said Tommaso Ciampa was Team Captain tomorrow during his Facebook Live interview and that is not the case. He meant to say William Regal.

Triple H was asked whether he’s spoken to CM Punk since he’s returned on FOX. Triple H said he’s working for FOX, which is “arm’s length from us.” He hasn’t spoken to him and its baby steps. He said Punk is back doing something in the business again and everyone should be happy about that, but it’s a long, long way to a return. He said people are going to automatically think “he’s working us” but anything can happen but they aren’t heading that direction yet.

He was asked about the potential of a Matt Riddle vs. Bill Goldberg match. He said that you’d have to ask Goldberg. Triple H said he didn’t know Riddle was going to do a spear and Jackhammer tonight. He said if Riddle thought Triple H would have had an issue with it, he’d have brought it up to him. If you’ve ever met Matt Riddle, he is a “in the moment” guy.

Triple H was asked about the status of Kevin Owens for tomorrow’s PPV. Triple H played coy as to whether he was still on Team Raw or whether its something that will develop. He said it’s crazy how a mechanical issue with a plane creates a magical scenario like we see developing right now.

He was asked about the big spot at the end of the Men’s Wargames and what’s going through HHH’s mind. He said he’s concerned and you know they are coming but the funny thing is that in his career, most injuries he’s seen, even to himself, come from little, silly things that happen in the ring. He said there were things that were suggested tonight that he shot down.

He was asked about the women’s Wargames match. He said when it came up, people felt he was putting them in a really tough spot and in a hard position but there was a belief they could deliver. Once they had that belief, the Dakota Kai-Tegan Nox angle was in the plans from Day One. If we did Wargames, we could do this…and it went from there. That was always in the plan from day one.

It was noted the Takeover in February is listed for a Sunday. He was asked if they were going to PPV and would be moving to a three hour time slot. HHH said he really didn’t know. Sundays is a more traditional pro wrestling time slot and he’s mentioned wanting to uncouple Takeovers so they are independent and on their own as opposed to a week like tonight that has so many hours of WWE content. To spread that out is to be more meaningful.

The NXT announce team will be on Survivor Series tomorrow, but the plan of who is doing what and how is a mix. The intent is to have representation of NXT’s brand with one of their voices. You will see them on the show and it’s fair to have that representation.

When asked about the planning for the Wargames, he said they had a whole team that collaborated to make everything work. He doesn’t want to single anyone out. There’s an ebb and flow in the business. At moments in time, you have to tell the story of the chapter. Some of them get you excited to get to the next chapter and others you close out the story with that chapter, like a season finale. Sometimes you have to do a show that’s a culmination of everything you’ve worked on. Then, you ask where they are going to go tomorrow and you say, “Gee, I don’t know where they are going to go” and you are left with lots of possibilities of where to go. He compared it to Star Wars where the end of each chapter feels like a complete movie but leaves you waiting to see the next one. He feels that there’s a lot of intrigue to see what happens on Wednesday but before that, how does it all spill over to Survivor Series where they have to band together to face Raw and Smackdown. It all makes you want to tune in.

He talked about the idea of NXT touring Takeovers separate from big PPV weekends. You can take this brand internationally and he wants to bring them to all the places and countries. He said wanting to uncouple Takeover from certain weekends doesn’t mean it will be removed from a Wrestlemania or Summerslam weekend. He wants to get things to a point where you wonder what’s the lineup on the WWE Network this coming weekend, whether it be Takeover or TLC

On Raw and Smackdown talents coming back to NXT, he said that it speaks to the brand that so many ask about coming back. It has a different buzz. WWE is like a family reunion and going to NXT is like being in the middle of a riot. It’s a different feel and experience. When they had the conversation about The Revival coming in, they agreed immediately, then came back and asked how much time they’d have. When he told them what he was thinking, they got all excited. The fan base brings the passion to the talent and back to the fans. It’s a symbiotic relationship. There’s a slightly different feel from WWE and you want to feel something different and get that fix. Some talents have done Wrestlemania and then they come back to NXT and they come to him and say they haven’t been this nervous in years.

HHH was asked about Britt Baker being shown on conversation and being identified. or those who missed it, check out several photos of Britt Baker close-up on-camera and giving the “death stare” to Stephanie McMahon during her cameo appearance. Triple H said the director went to the shot of the most concerned woman they saw in the crowd and went to the shot, then they got off the shot. He said that he didn’t have a problem with it and they had to address it, or else it’s an elephant in the room. He never would want to show her and get her “heat” and create a problem with her employer. He joked that no one will ever wind things up on the Internet and make something out of nothing. He said when he saw her on camera and realized it was her, he felt bad because it could be problematic for her. He said there was a previous time where she was sitting next to Stephanie McMahon. It was just one of those things. She doesn’t have a problem with her being shown or identified but doesn’t want to make problems for her with where she is. He said she’s doing a good job and is killing it where she is.

Triple H closed out saying The Allstate Arena is one of his favorite places and the entire crew, behind the scenes and on camera, inspires him with their passion. It makes him want to work 24/7 to make sure everyone gets what they want out of the business. He said that it was an awesome nice and thanked everyone for their time.

Make sure to join us here at eWrestling.com TONIGHT for LIVE WWE Survivor Series 2019 Results coverage from Rosemont!