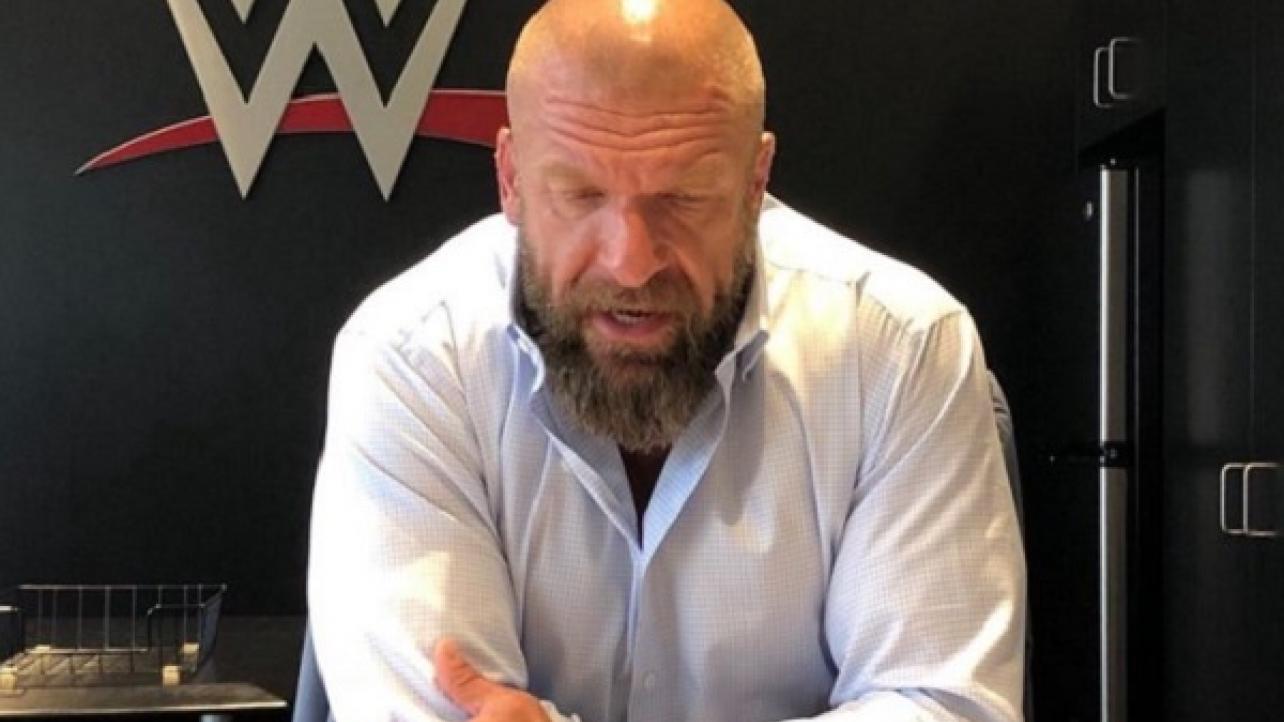 NXT TakeOver: XXV goes down this Saturday from the Webster Bank Arena in Bridgeport, Connecticut, and will stream live via the WWE Network. We will be providing live play-by-play results coverage of the entire event this Saturday night at eWrestling.com.

Paul Levesque hosted a conference call with reporters today in advance of Saturday’s Takeover show. Adam Hopkins introduced HHH and we were off and running.

He said that NXT 25 is an exciting event for him. It’s hard to believe that we are there already. He hopes to make this show more memorable than others. He said that they have always worked to have great shows and he thinks the they will again on Saturday.

He’s happy to be in WWE’s backyard in Bridgeport, CT. He thinks it will be a spectacular show. He said that he’s really looking forward to Shayna Baszler vs. Io Shirai (as am I), as well as Johnny Gargano defending against Adam Cole.

The first question asked how it feels to have this show not being on the same weekend of a major WWE show. Paul says it’s a little quieter for him, since he only has to concern himself with the show, plus it’s right down the street. For the talent, there’s no difference. They are all young and hungry, wanting to prove something to the world. He referenced Tyler Breeze being back in NXT as well, as he is trying to reestablish himself.

He is asked about Breeze coming back to NXT. Is he a regular or just here for this show?

HHH said Breeze is in NXT right now and he’s thrilled to have him back. He thinks he is one of the best talents out there. He said that he and Dream have all the markings of being the sleeper that could steal the show. He thinks that they have the opportunity to tell a very unique story.

He is asked what the biggest lessons he learned from the first show until now.

HHH said that the biggest learning curve was making the brand have its own identity, making it a stand-alone brand. He said it was about learning who the players where and what their journeys were. They have all different stories. He talked about the differences between all of the people that have come in. Some have been lifetime fans, others were folks that chose wrestling after doing something else. It’s great to see those people grow and come to love the business. To HHH, he has learned from all of their perspectives and where the wrestlers have come from. He said that it’s been inspiring and meaningful for him. He loves going to the Performance Center because it gives him a shot of adrenaline. It’s awe inspiring.

He was asked about about the Tag Title Ladder match and why the Raiders vacated the Titles rather than putting the new team over.

HHH said it’s always a mix as to how you do it. He said that since they are the main roster, you have to decide whether you are going to do a match where the fans have a good idea what the finish will be, since they are on the main roster. With a ladder match with all of the talent, he doesn’t think anyone will complain. All of the players are worthy to win it.

He is asked about a six month plan for talents. It hasn’t happened. Why?

HHH said necessity takes precedence. If the main roster needs talent, that can throw plans out the window. He said when that happens and talents get called up, he’s excited for the talents. He would like to have a plan, but sometimes that doesn’t happen. He compared it to baseball, where talents get called up due to need and circumstance.

He was asked about taking jabs at AEW and them coming back. Are they good for business and will NXT do it?

HHH said that at the Hall of Fame Billy being there was the elephant in the room and DX does that kind of thing. That is all it was. For him, he doesn’t really think about AEW, he just wants to put out the best NXT product that he can. He is focused on this Saturday at Takeover 25, putting on the best show and growing the brand.

The next question asked about with Tyler Breeze coming in, how about bringing in Harper or Gable, or is that too many main roster guys.

HHH says he goes by feel. What’s enough, what’s too much, you have to feel it out so you aren’t overdoing it. If you do that, you make the brand something that it isn’t.

Going forward, is there a feel as to how long he wants people in NXT, like could guys be there for their career now?

HHH said that they are all options as the move forward. As they grow their brands, there will be the opportunity for talents to have good, lucrative careers without ever going to the main roster. He feels that is a very real possibility going forward. Moving around will add longevity to everyone.

The next question asks about why they chose Bridgeport.

HHH said that they were originally scheduled to go to San Jose, as he mentioned before, but then the Saudi show came up so they had to move it. He said that the dominoes fell so they had to change buildings. He has wanted to do something in CT with the brand for a while now, so it made sense when the building was available. The timing was right so they took it.

Who will be on the pre-show panel?

They are still working through that. Wait and see.

The next question is about the the 24/7 or Women’s Tag Titles being defended in NXT?

He said that the possibility is there for both. Sasha and Bayley made an appearance. He said it’s something he would love but it comes down to scheduling. But who knows!

He was asked if NXT could be used on FOX?

He said they are looking at everything, there is interest in NXT. It’s also valuable to them on the Network. We will get there.

He is asked about talents creating their own content on social media. What does he think?

He thinks it’s great when talent steps out and creates their brand and enhances it. They encourage it and work with people at the Performance Center on how to do it. He said that they have a large team in place to keep track of it all. He himself can’t keep up with it all but they have a team that keeps up with everything. He referenced Drake Maverick making the Wanted posters on his own and said they thought it was great so they incorporated it into the show.

He was asked about how he handles things like UFC coming to Matt Riddle and trying to get him to fight?

He said they would talk to Matt and take it from there. Nothing is set in stone. Talents get offers to do things all the time. He said that there is an Indian worker who is a movie star in India. He gets parts and goes back, then returns and continues training. He said that he loves Riddle. If an offer came, he may not want it because he is having the time of his life wrestling. He may not even want to do it.

Next questions asks about the plethora of writers on the main roster, what is the process for a Takeover show?

He said it’s a different brand and feel. Raw and Smackdown are long TV shows. Takeovers are more simple. It’s wrestling matches. They have already built to it, it’s the culmination of what has already happened on TV. There’s a team with him, Shawn and others.

He was asked about an NXT Takeover announcement?

He is hoping he can put out something soon. They are trying to finalize thing. Dominoes move and change things. That happened here.

He is asked about bringing a different Takeover to San Jose later.

Yes, there is. They want to run there again due to the building having meaning to them as their first big show’s home. When? He can’t guess, but it’s on the radar.

Are there any challenges with running an event like this without the main roster also running a show?

He said that the level of attention of having the main roster there adds to the buzz for them but NXT has built its own reputation so he believes fans are aware of that and are excited to come. So yes, there are challenges it’s definitely doable and Bridgeport will light this weekend. He thinks the brand is enough to stand on its own. That is what they will do this weekend.

That wrapped up the call!

Make sure to join us here at eWrestling.com for live play-by-play results coverage of NXT TakeOver: XXV!