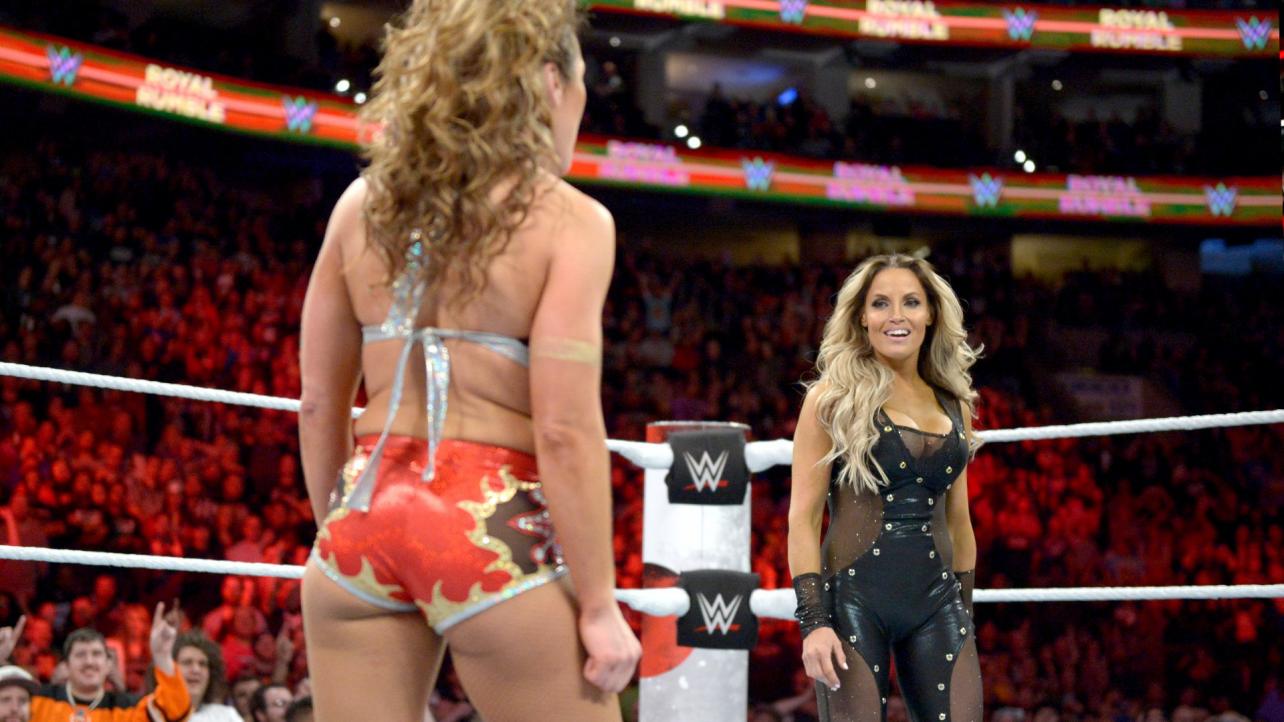 WWE Hall Of Famer Trish Stratus recently appeared as a guest on the Chasing Glory with Lilian Garcia podcast for an in-depth interview with the former longtime WWE ring announcer. Featured below are some of the highlights.

On the women’s revolution in WWE, if she watches the product these days and laying the foundation for women in the ring in the company: “It was incredible. Do I watch it everyday? I don’t, but I definitely keep track of what is going on every week and what is going on, of course all the current news with what is going on with the women. It is just amazing to watch–going back to the Women’s title coming back. That was such an epic moment so I have been watching carefully and who is rising in the ranks. So when this was announced, when we were laying the foundation from back in the day, with me, and Amy [Lita] Dumas, and Jackie [Moore], Molly Holly, Victoria, the ‘Golden Era,’ which is what those from the inside call it, but we were just laying down the ground work and wanted the main goal for women to be perceived differently. We wanted to do what the guys did; that was my whole thing with Fit [Finlay], I used to say, ‘I just want to do what the guys do,’ and now we finally got to do that. Currently, what is going on, the women are just so strong. They took what we did and earned this amazing honor to have the first ever Women’s Royal Rumble. Of course, I sent a little tweet out and said how amazing this [news about the Women’s Royal Rumble] was and said that the women were unstoppable.”

On being contacted by WWE to return for the first-ever Women’s Royal Rumble match: “When [VP of Talent Relations] Mark Carrano called, it was actually on [Canadian holiday] Boxing Day, which in America you don’t have a Boxing Day, but in Canada it is a chill out, eat all junk, leftover food from Christmas kind of a thing, and I get this call from Mark [Carrano] and am kicking back with this chocolate peanut butter bowl, and he was like, ‘We would love for you to be part of this, sister.’ A couple of things went into my mind; number one I was completely honored to be thought about to be part of this [Women’s Royal Rumble] of course, and number two, well, it has been a minute. Let’s do the math: it has been about eight years since I wrestled. Last I did, I was doing some work with ‘Snooki’ in the ring and being dissed by John Morrison. I even said to Mark let’s talk first because I didn’t want to say a for sure yes, I would have to think about it because I questioned whether or not I can actually do this. I called a buddy of mine, who is known as ‘El Fuego’, his real name is Rob [Echeverria]. I asked him if he had a ring, and he said that he would set one up. I got in there and said OK, apparently it is like riding a bike, so afterwards I confidently called Mark Carrano and said, let’s do this.”

On the spot in the Royal Rumble match where she and Mickie James reignited their classic rivalry: “It’s a combination of a few things. One, is that you wonder if they will remember you. Coming back to the 25th Anniversary I was like, do you all remember me? They did and I was saying to myself, okay, cool. Mickie James and I had a feud, but it was well over a decade ago I want to say. It was around 2005, but as you can imagine they are going behind the scenes and putting the women together of who is going to eliminate the other at what spot. Initially, we were [exiting] exactly around the same spot, so that spot didn’t even happen, but it magically appeared and we ended up doing something together because I think people realized that moment is an important part. We were sort of the crossover of the ‘Golden Era.’ Mickie James was at the tale-end of the girls. Referring to me, Jackie [Moore], Amy [Lita] Dumas, Victoria; those girls in that era. Then, those women sort of retired and me and Amy [Lita] Dumas rose; Mickie James carried the torch.

“Ironically, when we were on the stage at the 25th Anniversary of Raw, it was kind of strange that Mickie James wasn’t on the stage with us. But obviously it makes sense she is part of the current roster, but she was a huge part of why the women are recognized today is because of her, so it was cool to know that they recognized the important moment between us. You can see the excitement on both of our faces, we were just like, ‘Oh yeah.’ It was just really good; we came up with a spot and it was just a really perfect moment.”

Check out the complete Trish Stratus interview from the “Chasing Glory with Lilian Garcia” podcast at PodcastOne.com.