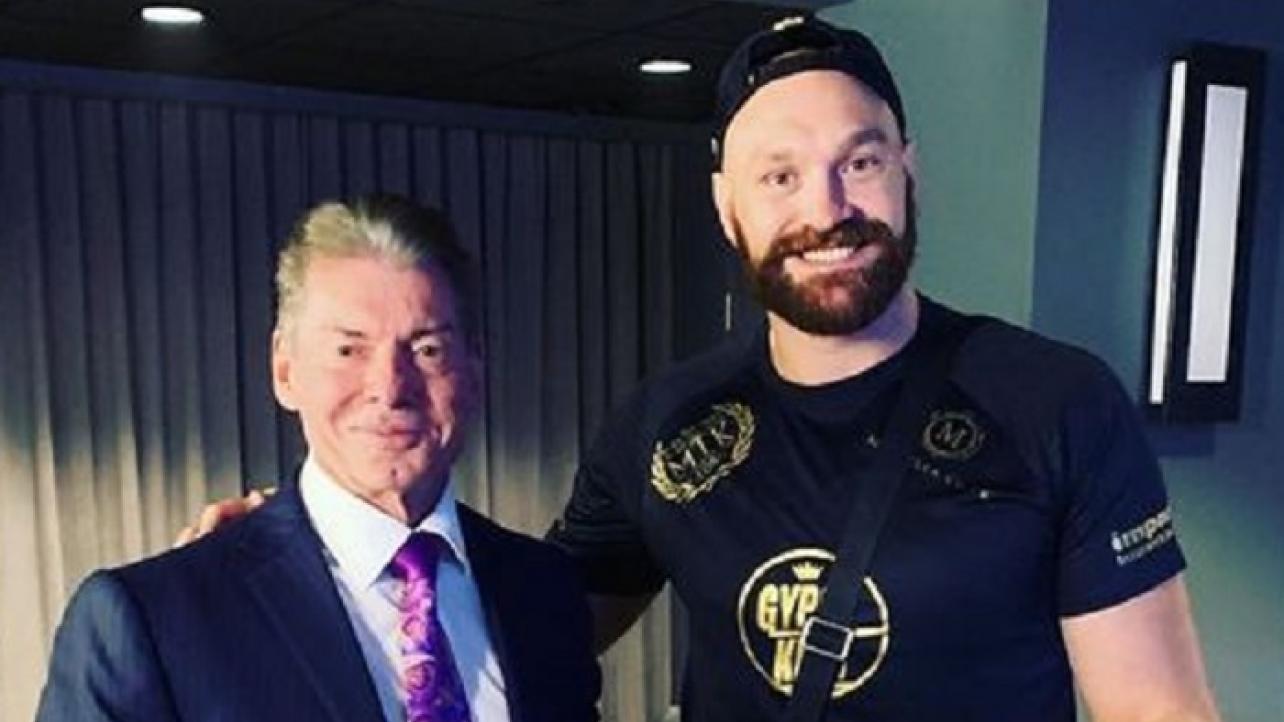 After disappearing for a couple of years to fight mental health issues, Tyson Fury sure is making up for lost time by maintaining and continually adding to his lucratively busy schedule. The latest addition to said-schedule could see “The Gypsy King” re-enter the squared circle for WWE for a match on their grandest stage — WrestleMania.

In a recent interview with Talk Sport, the lineal boxing heavyweight champion of the world discussed his new autobiography, “Behind the Mask,” as well as his ongoing mental health battles that have traveled with him throughout his decorated career.

Additionally, Fury touches on his recent stint in WWE, where the heavyweight boxing star reveals that Vince McMahon complimented him on how quickly he picked up the business when coming in to work the WWE Crown Jewel pay-per-view in Riyadh, Saudi Arabia.

While making the media rounds to promote the big WWE special event, Paul “Triple H” Levesque also spoke highly of Fury’s ability to learn the pro wrestling / sports entertainment craft at a rapid level, going as far as to compare Fury with other combat sports crossover athletes who performed at a high level in WWE such as Floyd Mayweather and Ronda Rousey.

“I have been a fan of WWE all my life,” Fury told Talk Sport. “I’ve been a big fan of all the big wrestlers. I am athletic enough to be able to learn quickly.”

He continued, “Vince McMahon said he has recruited sports stars from all different sports and he has never seen anyone come into their game, have a couple of training sessions, and pick it up like that. I looked like a natural in there!”

The boxing star is currently looking to secure a rematch with the reigning WBC heavyweight champion Deontay Wilder if “The Bronze Bomber” can get past the dangerous, hard-hitting Luis Ortiz in their upcoming rematch next Saturday in Las Vegas, Nevada.

In the first Fury-Wilder fight back on December 1st in Los Angeles, California, which is considered among the greatest heavyweight bouts in boxing history, “The Gypsy King” and “The Bronze Bomber” fought to a rare Split Decision Draw with the scores being 115–111 for Wilder, 112–114 for Fury and 113–113 even.

The fight saw Fury easily out-box the knockout artist round after round, however the two key moments in the fight saw Wilder score knockdowns on “The Gypsy King” in the ninth round and again in the 12th and final round, the second of which seemed to be a walk-off knockout for “The Bronze Bomber” until the British heavyweight star miraculously rose to his feet in a moment that many compared to WWE legend The Undertaker’s infamous “sit-up out of nowhere” spot.

While the rematch between the still undefeated heavyweight boxing champions will no doubt be a box office blockbuster that will bank big bucks for each boxer, the fact that Fury risked it all by taking a fight against Otto Wallin in September was a dangerous career decision. One that resulted in him receiving a gruesome cut over his eye that could have stopped the fight, which he ultimately won by way of Unanimous Decision with scores of 116–112, 117–111, and 118–110 after 12 rounds.

If that wasn’t risky enough for the fearless fighting phenom, his next career decision “didn’t go down too well” with anyone involved in the handling of Fury’s career, as he explained during the Talk Sport interview when discussing his deal to compete in an actual pro wrestling match for WWE’s big event in Riyadh, Saudi Arabia, before teasing a return for the promotion’s biggest annual spectacular — WrestleMania.

“It didn’t go down too well with my management, promoters, trainers, family,” said Fury. “Everyone was saying, ‘Oh the Wilder fight … you are going to get injured!’

“But the Wilder fight may as well be a million moons away,” he added before revealing that he and WWE have “left the door open,” teasing a potential future return to the ring.

“We have left the door open,” said Fury regarding his current status with WWE. “WrestleMania is coming up in April so who knows?”

Fury concluded the WWE portion of the interview by dropping the classic line all pro wrestlers use when asked about making a comeback.

WrestleMania 36 is scheduled to take place on Sunday, April 5, 2020 from Raymond James Stadium in Tampa, Florida. The show will be available via pay-per-view and will stream live for members of the WWE Network.

If that weren’t enough, Fury also spoke about possibly training with UFC mega-star “The Notorious” Conor McGregor for a run in the world of MMA once his career in boxing is wrapped up.

“When I get my boxing career finished, I’m gonna go over there and set about all those UFC fighters,” Fury told Talk Sport. “I’ve got an offer from Conor McGregor to go to Ireland and work out.”

Check out the complete Talk Sport interview with “The Gypsy King” Tyson Fury below, or at TalkSport.com.