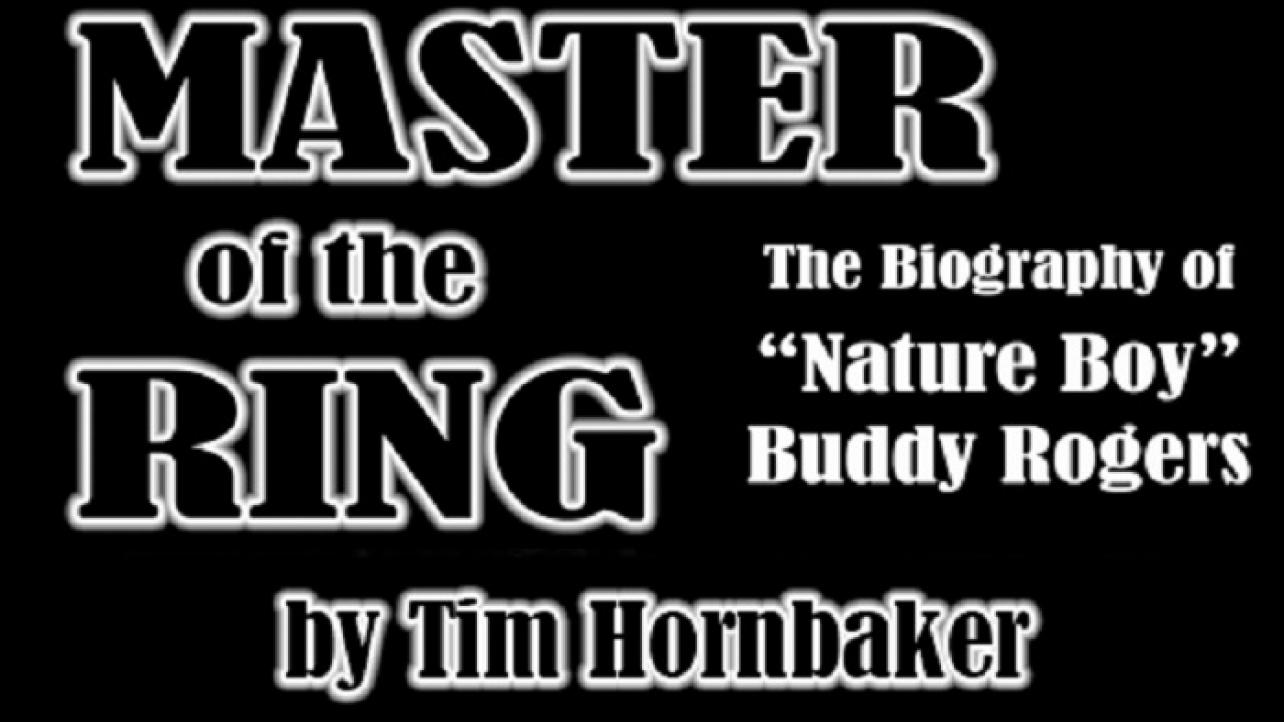 “To a nicer guy, it couldn’t happen,”
– Buddy Rogers

When clips are shown of the legendary former WWWF Champion, the original Nature Boy — Buddy Rogers — that line from an in-ring post-match promo he delivered is usually among the ones that are included.

If you want to learn more about the legendary professional wrestling icon, now is your chance.

A new biography dubbed “Master of the Ring: The Biography of ‘Nature Boy’ Buddy Rogers” focusing on the first-ever WWWF Champion was recently released by author Tim Hornbaker and Scott Teal’s Crowbar Press.

Featured below are some promotional materials released for the book, which is available now at CrowbarPress.com.

MASTER of the RING: The Biography of “NATURE BOY” BUDDY ROGERS

In this modern era of “sports entertainment,” World Wrestling Entertainment has been a must-see event. Legends like Hulk Hogan, “Stone Cold” Steve Austin, and The Rock have headlined on that stage and delivered some of the most memorable moments of the past 30 years.

But, in 1948, years before the aforementioned names were even born, a young man named Buddy (Nature Boy) Rogers got into the ring in Hollywood Legion Stadium and transformed pro wrestling forever. His flamboyant personality and under-handed tactics made him an immediate box-office sensation. He was center stage in every territory in the U.S., not only in fast-paced matches, but in backstage power plays.

By the late 1950s, he was an unparalleled superstar, but there was one honor he coveted … the National Wrestling Alliance world heavyweight championship. To that point, the hostile environment of wrestling politics had stalled his push to the throne, but Rogers overcame the obstacles in his path until, finally, with the right friends in high places, he was given a title match against champion Pat O’Connor in Chicago’s Comiskey Park before a record crowd of 38,000 spectators. By the end of the night, Rogers was the new heavyweight champion of the world! After the match, he strapped on the title belt, stood in the center of the ring, and in his typically arrogant fashion, announced:

“To a nicer guy, it couldn’t happen!”

Backstage assaults and injuries almost derailed his title reign, and in the midst of his historic run, Rogers suffered serious health problems, and a cloud fell over his future on the mat. In May 1963, he defended the title against Bruno Sammartino, the popular “Italian Superman,” at Madison Square Garden. Since then, wrestling fans have asked countless questions about what really happened on that fabled evening. Author Hornbaker dissects the incident, as well as Buddy’s entire life, to answer those questions and clear up some of the misconceptions and lies told about Buddy. You will learn the entire “Buddy Rogers Saga” from beginning to end as Hornbaker focuses on the backstage politics, secret strategies, and different perspectives, including never-before-heard inside sources from that time-frame, including Rogers’ former manager, Bobby Davis.

Active in wrestling for more than 60 years, Buddy’s legacy is as strong today as it ever was. In 2015, WWE executive and former champion Triple H was asked who he would choose if he had the ability to wrestle any one competitor from the past. Without hesitation, he said, “Buddy Rogers,” acknowledging the masterful legend and bigger-than-life personality of the original “Nature Boy.”

In this book, a detailed look at one of the most important figures in wrestling history, the truth of Buddy Rogers is told — in all of his stunning (and colorful) glory. It’s a story with boundless action, mayhem, and excitement.