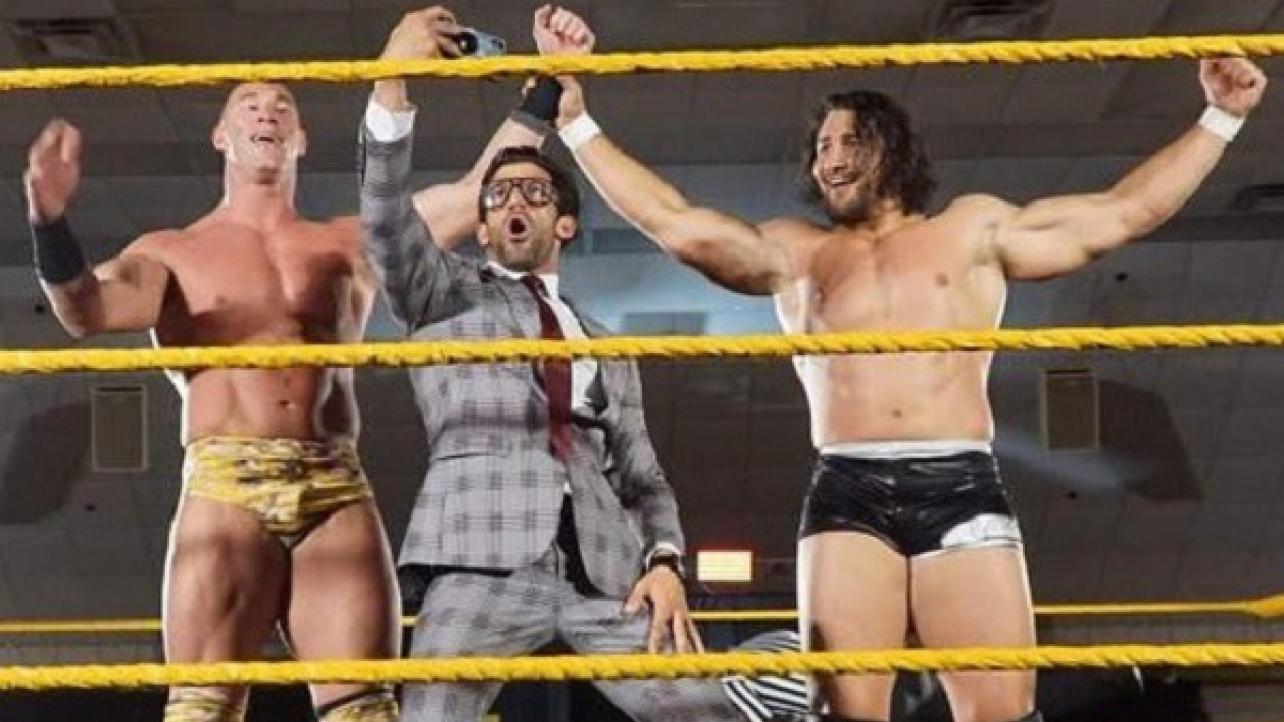 Robbie E. signed with WWE back in March and immediately reported to the WWE Performance Center training facility in Orlando, Florida with the latest class of developmental recruits.

On March 21st, he made his official NXT debut as a manager named Robert Strauss, which is actually Robbie E.’s real name.

Strauss debuted as the heel manager / mouthpiece for the tag-team of Rinku Singh and Saurav Gurjar at the NXT live event in Sanford, Florida.

He cut a promo before Gurjar took on Jermaine Haley (Jonah Rock) in one-on-one competition. Strauss noted that he was not a manager, but instead a “brand.”

This time, Stone is serving as the heel manager for the tag-team of Dan Matha (Dorian Mak) and Riddick Moss. The duo is collectively known as “The Outliers.”

It is lucrative. It is a brand. It is happening this weekend. The #Outliers are headed South. EVERYTHING is bigger in Texas. @Dorian_Mak @RobertStrauss @riddickMoss pic.twitter.com/tiieDtfa4S

The NXT manager has updated his official Twitter page from @RobertStrauss to @RobertStoneWWE, and has been posting a number of tweets this weekend.

Check out some of the social media action from Robert Stone this weekend below.

Have ya not met the #Outliers yet? @WWENXT may not be able to handle us… pic.twitter.com/k5pOhsLN72

Does @EddieOrengoWWE even have the power to do this??? pic.twitter.com/bKwwMTsSe0

I feel like this has kind of been an unfair weekend. pic.twitter.com/MgfSA0bt0M

Pics, stares, handshakes, shoes, etc. Ya get it all when the #Outliers come to town. On one of our yachts now, but we’ll be to #NXTCocoa eventually. Jane is handling our time schedule. pic.twitter.com/p1jsXkKFGI

This was uncalled for… @WWENXT has to right this wrong… pic.twitter.com/wMIjjGjGPv

Check out those pictures and video clips below.

Dorian Mak
&@riddickmoss
LOUD, OVER THE TOP in UR FACE, MOST CHARISMATIC ENTERTAINERS on ANY SHOW WE CHOOSE TO PERFORM

WE WILL BE PUTTING ON A SHOW FOR THE AGES LADIES&GENTLEMEN#Outliers#BigSuave#Wwe#NxtCocoa pic.twitter.com/H9oJnkwWT1