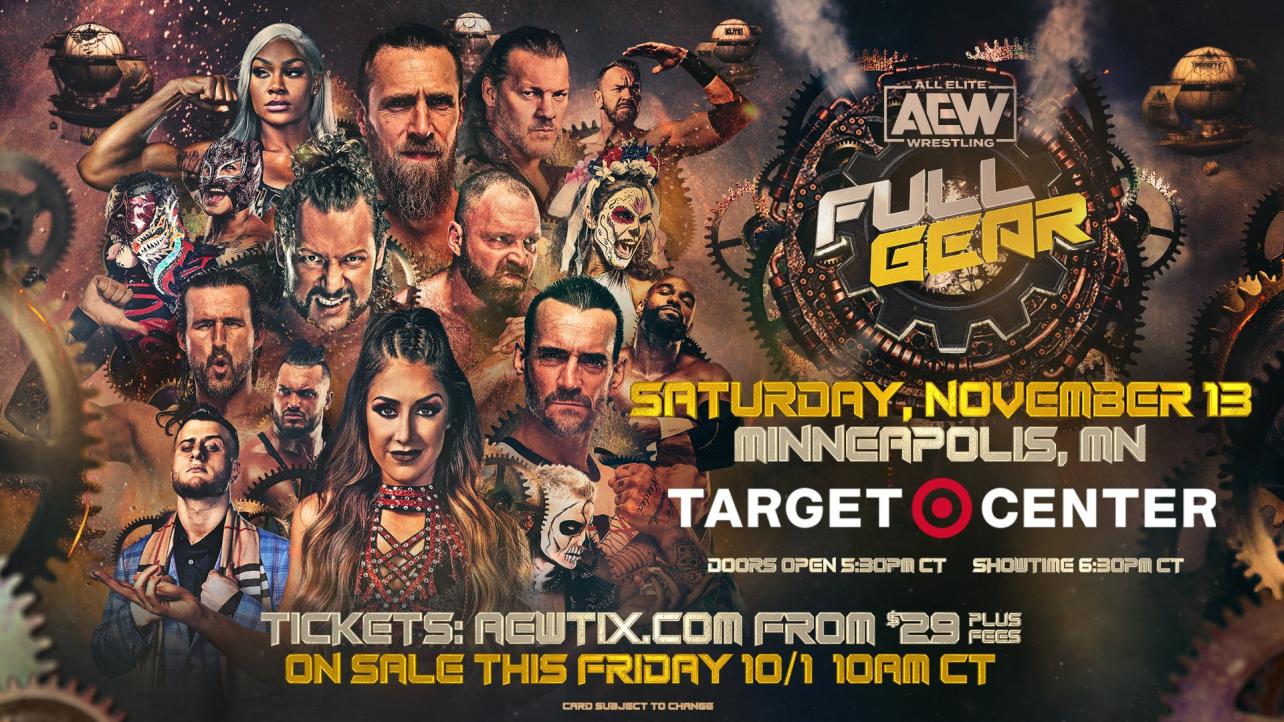 The card for AEW Full Gear 2021 continues to take shape.

Following this week’s edition of AEW Dynamite on TNT on Wednesday night, new matches were teased for the show scheduled for November 13, 2021 on pay-per-view.

Added to AEW Gull Gear 2021 is Darby Allin vs. MJF in one-on-one action, as well as FTR vs. The Lucha Bros for the AEW Tag-Team Championships and a Minneapolis Street Fight between The Inner Circle and American Top Team.

Also expected for the PPV, which emanates from the Target Center in Minneapolis, MN. on 11/13, is Kenny Omega vs. “Hangman” Adam Page for the AEW Championship, Dr. Britt Baker vs. Tay Conti for the AEW Women’s Championship, the finals of the AEW World Title Eliminator Tournament, as well as a potential tag-team bout with Cody Rhodes & PAC taking on the duo of Malakai Black & Andrade El Idolo.

Featured below is a look at the expected lineup as it currently stands for the AEW Full Gear PPV on 11/13:

Make sure to join us here at eWrestling.com on 11/13 for live AEW Full Gear 2021 results coverage from Minneapolis, MN!

It’s @Sting…and @DarbyAllin is BACK and wants @The_MJF at #AEWFullGear! Tune in Live Nationwide for #AEWDynamite on @tntdrama NOW pic.twitter.com/ZF8r86ZuVT

The #AEW World Tag Team Champions the #LuchaBros have a challenge for #FTR at #AEWFullGear – Tune in Live Nationwide for #AEWDynamite on @tntdrama NOW pic.twitter.com/DCGCZwoYxM

#FTR (@CashWheelerFTR & @DaxFTR) accept the challenge from #AEW World Tag Team Champions the #LuchaBros and are ready for a fight at #AEWFullGear – Tune in Live Nationwide for #AEWDynamite on @tntdrama NOW pic.twitter.com/FtnN7eXOyb