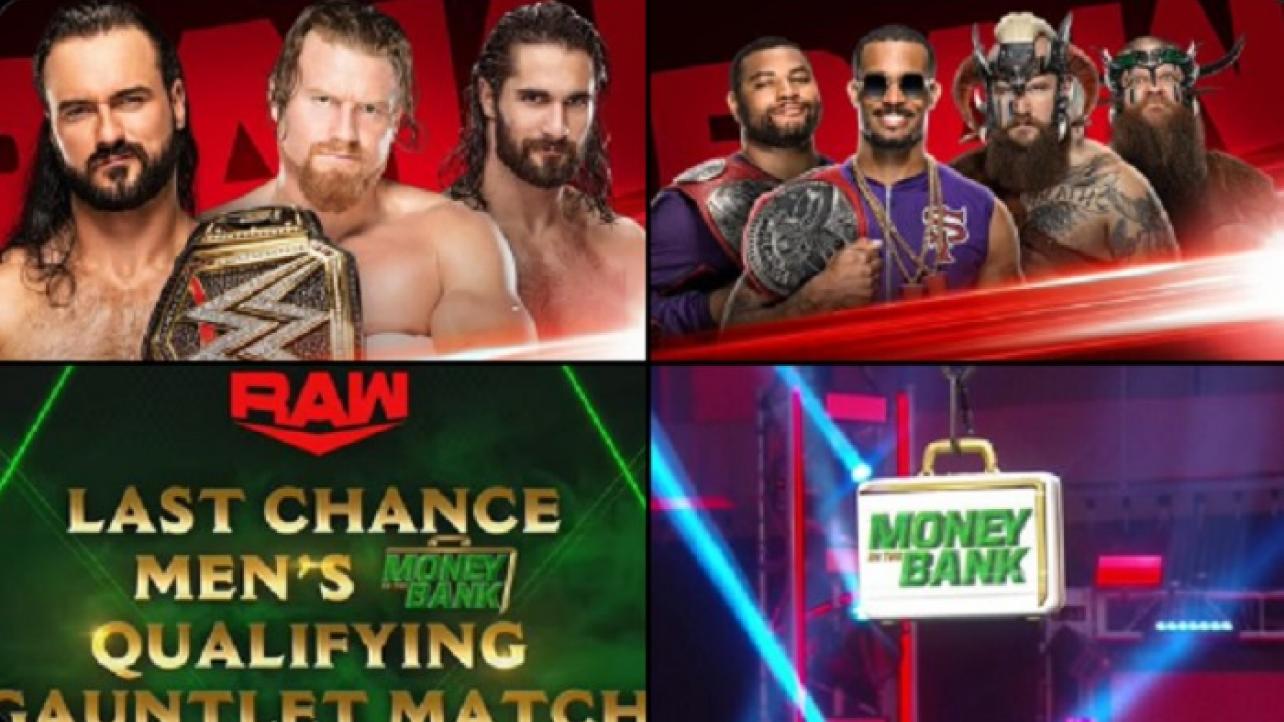 The final red brand show leading up to this Sunday’s WWE Money In The Bank pay-per-view goes down tonight, as WWE Monday Night RAW returns from the WWE Performance Center in Orlando, Florida.

In addition to the non-spoiler confirmed match listing and video trailer for WWE Monday Night RAW tonight that we reported earlier today here at eWrestling.com, WWE.com released the following preview for tonight’s show:

Drew McIntyre battles Murphy before his WWE Championship clash with Seth Rollins at WWE Money In The Bank and the final Men’s Money in the Bank Ladder Match spot will be decided in a Last Chance Gauntlet Match on Monday Night Raw.

Drew McIntyre has flexed his muscles as the consummate fighting champion, and he’ll be looking to deal a crushing blow to his WWE Money In The Bank challenger by defeating his most ardent follower.

The WWE Champion will face Murphy just days before battling Seth Rollins at WWE Money In The Bank.

Can McIntyre fend off the former Raw Tag Team Champion, or will Rollins seize the opportunity to deliver a message to his rival?

Catch the heated clash on Monday Night Raw at 8/7 C on the USA Network to see who emerges with the upper hand!

The Viking Raiders said they want the smoke. They’ll get it tonight on Raw when they face Raw Tag Team Champions The Street Profits.

Erik & Ivar have been quick to point out that Montez Ford & Angelo Dawkins have yet to defeat them, which set off the champions, leading them to accept The Viking Raiders’ challenge.

Who will emerge victorious in this battle between two of the red brand’s hottest teams? Find out tonight on Raw at 8/7 C on USA Network!

As first reported on WWE’s The Bump, a Last Chance Gauntlet Match tonight on Raw will determine Apollo Crews’ replacement in the Men’s Money in the Bank Ladder Match.

Crews suffered an injury during a United States Title Match against Andrade. Though he tried to fight through the pain, Crews was unable to finish the match and ultimately forced to withdraw from the career-changing Ladder Match.

While the participants in the Gauntlet Match are unknown at this time, it is sure to be a hotly-contested bout, with a huge opportunity hanging in the balance. Who will earn the final spot in the Men’s Money in the Bank Ladder Match? Find out on Raw, tonight at 8/7 C on USA!