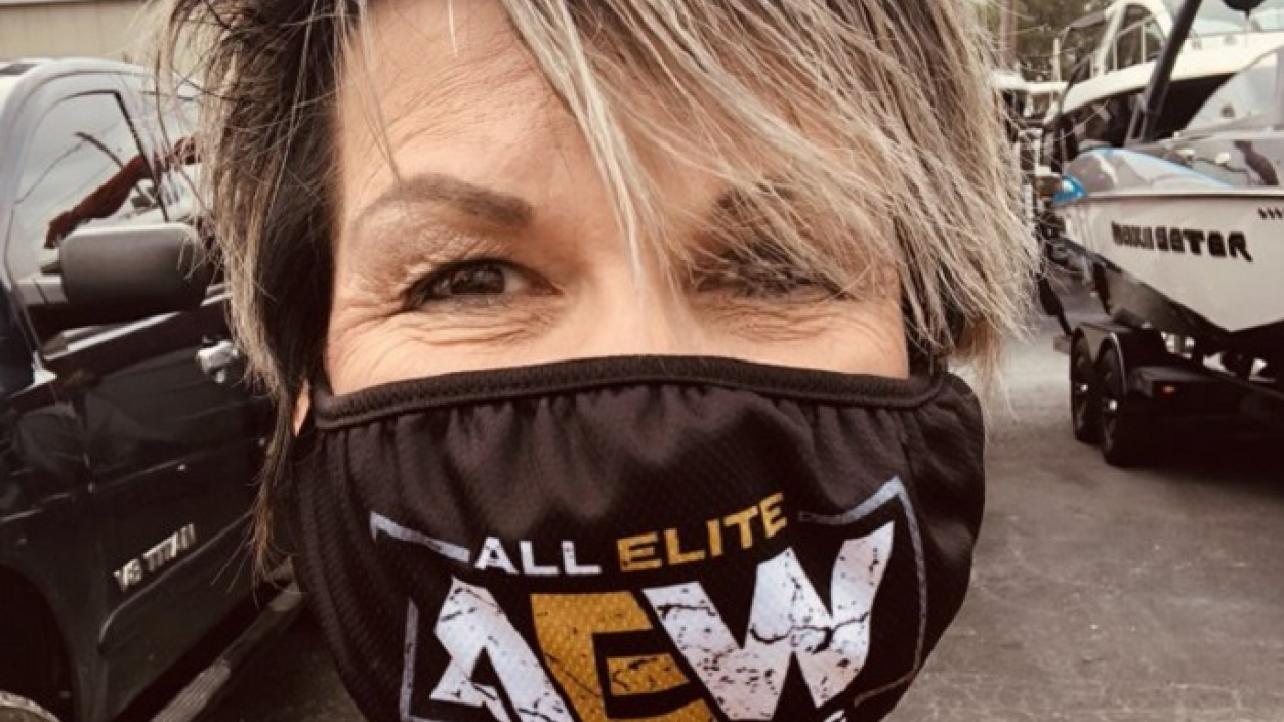 Vickie Guerrero Opens Up, Gives Fans Detailed Look At Her Relationship With The Late Eddie Guerrero

Former WWE Smackdown GM, and current member of AEW Vickie Guerrero recently sat down for an interview on AEW Unrestricted. During the interview, Vickie spoke about the way she performs, and a lesson she learned from Eddie Guerrero. When speaking on the subject, Vickie said:

“I think the most important thing I keep in mind is that my role is just an embellishment of the superstar that’s in the ring. I don’t want to overshadow them at all. I like to do my little cheating spots or be on the mic, but the one thing I’ve always learned is the less I do, the more powerful it is. If I do something all the time, I’m always trying to overshadow or take attention away from the match. Actually, Eddie taught me that. I loved Nancy and Miss Elizabeth, and I used to love the women managers. Eddie always said they’re just there at certain times in the match to make an impact”

Guerrero would continue to talk about the way she operates at ringside, and the differences in working with male wrestlers, and women’s wrestlers saying:

“It’s crazy to me how I always remembered that because who would’ve ever thought I was gonna be a manager? I’ve always been very respectful to anyone I’ve been placed in the ring with and to make them shine and do my little part and just be there at the right moment and the right time to do the right thing. It seems like it’s gone really well. For the guys, it’s very different because I can have the cougar character and flirt with them. But with the girls, I feel a sense of empowerment even more so because we’re women and we’re representing that match for that moment. So, it’s a very empowering feeling with women and then with men too because I get to a double character. It’s been really fun.”

“During that storyline, it was Rey Mysterio and Eddie for the child custody of Dominik. So, it was going really well between Rey and Eddie, and when Vince McMahon wanted the family to get involved to make it seem more personal, I thought it wasn’t gonna come to fruition. But it did, and we started bringing me and the girls in. To be able to perform backstage and do different segments with Eddie – he was a perfectionist. He would just beat himself up over the littlest things, so the pressure was on me to not screw up because I had to go home with him.”

“That was something that was even twice as hard for me to try to do my best without getting that Guerrero look. He really helped me a lot because this is now what I do for a living. I was just a mom taking care of our girls, so he really coached me on how to look in the camera and how to work and what to say and how to say it. He was so great. I wish it would’ve been more of him being alive longer where I could’ve worked with him more, but it’s just weird how life works out. I just had that great moment with him before he passed.”

Vickie continued to speak about her relationship with Eddie, and gave a peak into the man behind the character. As it turns out, the man who would “lie, cheat, and steal” in the ring, also cheated during family game night. When speaking about “latino heat” and his gaming habits, Vickie said:

“Eddie cheated a lot with me and the girls playing games at home. Whether it was cards – if we were playing cards, he always had extra cards to pull out and win at poker. He was a cheater. He hated to lose. I’m writing a book, and we have some stories in there and sharing Eddie with the public. He was a horrible loser. If you thought he would get mad in the ring, he acted like a little three year old whenever the girls would win against something with him. He hated to lose.”

Vickie Guerrero Opens Up, Gives Fans Detailed Look At Her Relationship With The Late Eddie Guerrero