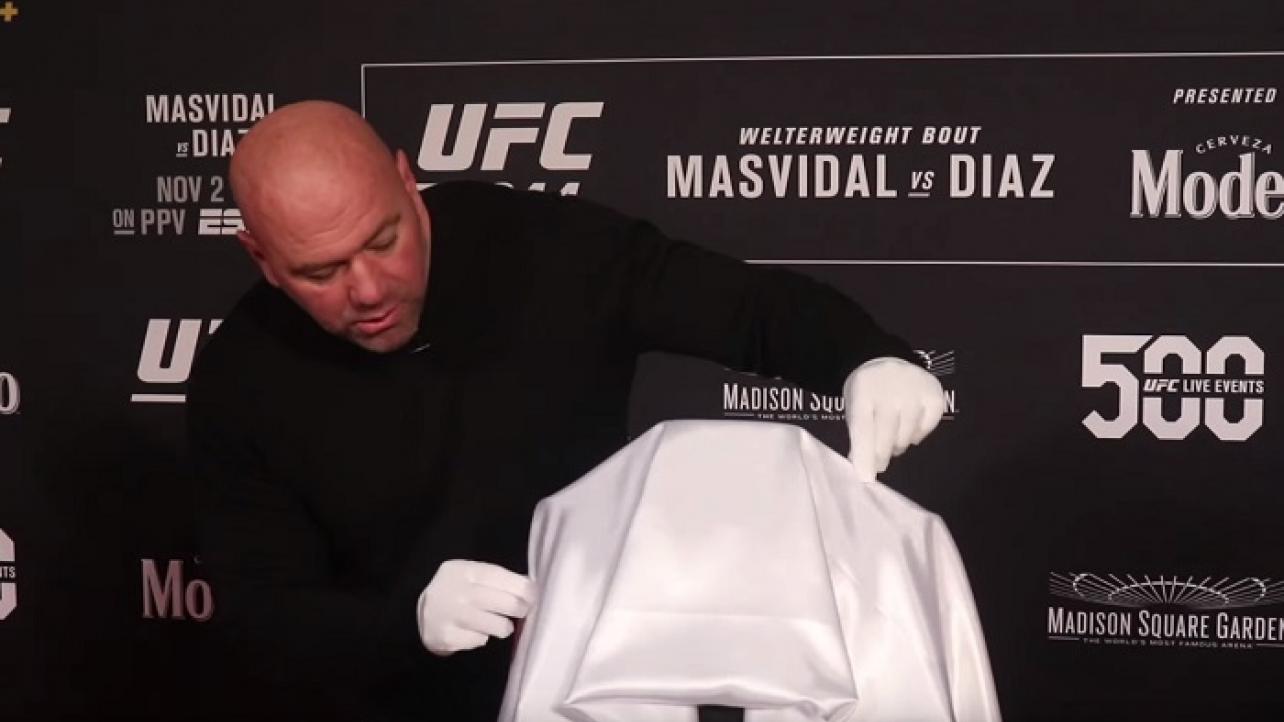 Dwayne “The Rock” Johnson dropped a MMA news bombshell during his appearance at the UFC press conference at the Hulu Theater in MSG on Friday to unveil the “BMF” title belt for the Jorge Masvidal vs. Nate Diaz main event for the UFC 244 pay-per-view at Madison Square Garden in New York City, New York on Saturday night.

The Rock revealed that his production company, Seven Bucks, is working on a major motion picture based on the life and career of one of MMA’s founding fathers, “The Smashing Machine” Mark Kerr.

Johnson spoke about being inspired by the HBO documentary titled “The Smashing Machine” the chronicled the downfall of Kerr’s MMA career into painkiller addiction and mental health issues, and noted that he actually trained in similar circles to Kerr in his early days in WWE while “The Smashing Machine” was still competing in MMA.

He also spoke about some of his friends ending up dead at an early age due to addiction issues.

“With that said, there’s something that I just wanted to announce,” Johnson said at the press event today. “I’m very excited to announce this.”

He continued, “I wanted to start with the MMA and UFC community first. I’m proud to say that myself and Seven Bucks Productions are going to make a film about one of your founding fathers — ‘The Smashing Machine’ Mark Kerr. So that’s an announcement that I’m very excited about.”

After making the announcement, The Rock took some questions from members of the MMA media in attendance for the press event in NYC. The first was the obvious, which was why The Rock decided to select Kerr’s story as the one to base a movie off of.

“Mark Kerr’s story is such an incredible story,” said The Rock. “Here’s a guy that was a two-time winner of the UFC tournaments in the early days and here’s a guy who went over to PRIDE and had an incredible run. I wanted to shine a spotlight on this man, who is still alive.”

He would go on to elaborate, explaining what specifically interested him about Kerr’s journey and story.

“What I think is interesting about Mark Kerr’s story is, yes, he was undefeated for a long time but like us and a lot of the fighters, he battled demons,” said Johnson. “These demons of addiction and mental health and these demons of fighting in front of people. Here’s a guy who hit ‘Rock Bottom’, but just like all of us in this room, we want to get up and do a little bit better tomorrow than you did today.”

As far as the Masvidal-Diaz fight to determine UFC’s “B.M.F.” (yes, it stands for the same thing that “Stone Cold” Steve Austin refers to it for) on Saturday night at MSG, The Rock confirmed he will be on hand to strap the brand new BMF Title Belt around the waist of the winner of the UFC 244 main event.

He also noted that MSG is an arena that holds a special place in his heart.

“[MSG is] an arena that I have such profound respect for,” said The Rock. “I started my career here in New York City. I had my very first wrestling match in Madison Square Garden.”

Check out exclusive photos and videos of the BMF Title Belt that Masvidal and Diaz will be fighting for, and that The Rock will be strapping around the winner’s waist at Saturday night’s PPV — the 500th event promoted by the UFC that U.S. President Donald Trump will be attending — below.