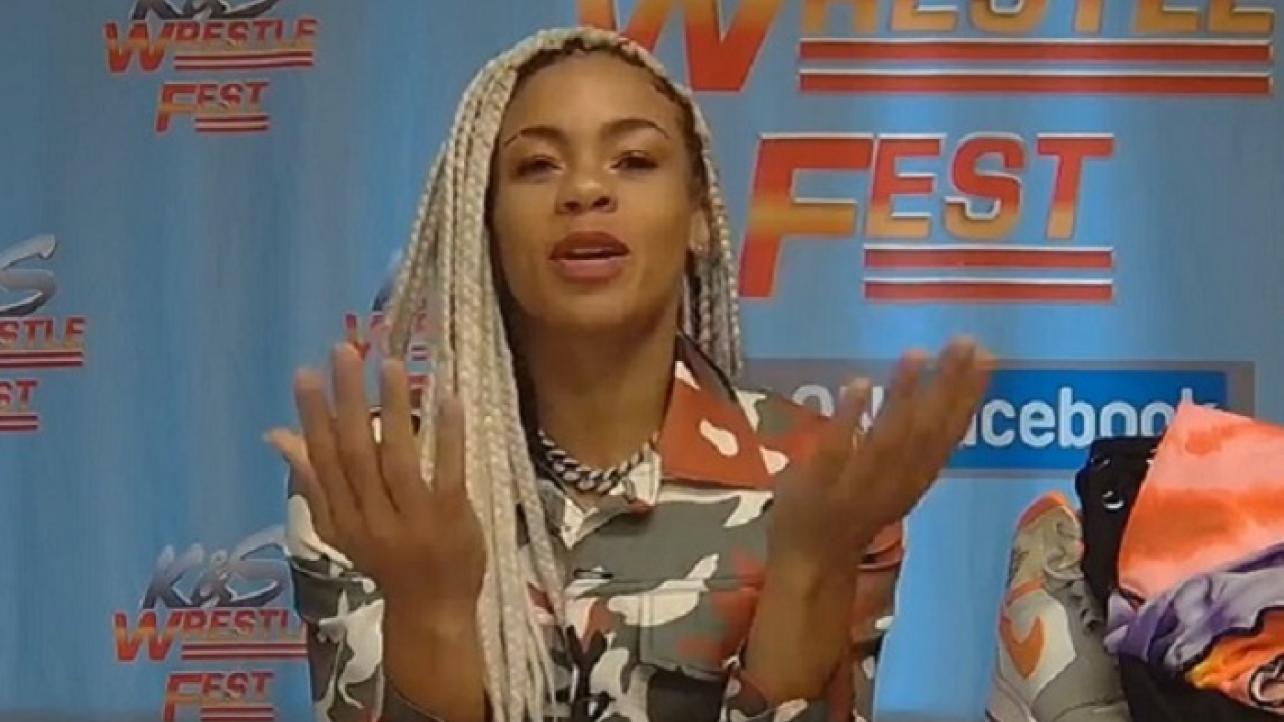 WATCH: B-Fab On Rumors Of Hit Row’s WWE Release: Was It A Message From Vince McMahon To Triple H? (Video)

Former WWE Superstar B-Fab of Hit Row recently appeared at K&S WrestleFest for a virtual signing where she spoke at length about her departure from the company.

During the Q&A, B-Fab revealed she only had a 30-day non-compete clause in her deal with WWE. Additionally, she spoke about the reason she was given for her release, how there was a disconnect for Hit Row when they were called up to the main roster from NXT, if she feels the entire group being released was a message from Vince McMahon to Triple H, rumors of Hit Row being cut due to issues with Top Dolla being difficult behind-the-scenes and more.

Featured below are some of the highlights from the appearance where she touches on these topics with her thoughts, as well as a complete video archive of the Q&A session.

On her WWE contract only having a 30-day non-compete clause: “They still have some time left on their contracts. (I was on) 30 days, (they were on) 90 days. All three, for sure.”

On how she was told she was being cut due to budget reasons: “I have no clue at all. They released me along with 18 other people. The thing that they said was budget cuts, that’s the most detail I know. There was really no reason. They were saying that the boys were deemed to be okay without me because they could all talk. I really wasn’t a manager because I was going to be wrestling, I just hadn’t been doing it yet. They could all talk so [WWE] felt like, why do they need me? They’ve had Shield and New Day and most guys do well, so they probably felt ‘they will be fine without her because other groups have survived.”

On whether the group’s release was a message from Vince McMahon to Triple H: “I did hear a little bit about that online about them having family issues right now. I don’t know if that’s exactly what led to our release or why they did what they did and how they did it. I truly don’t put anything past anyone or any company or business. It could be something as spiteful as ‘this is your thing, you like this, I’m going to get rid of you guys.’”

On the theory that Hit Row got released because of Top Dolla being difficult: “Here’s the thing, people will always say anything to make sense of when things happen even if it’s not true or they don’t know the details. Things like that. AJ is an amazing guy and is so smart. A huge wrestling fan, knows his stuff, very dedicated to the whole group. We had a lot of idea for the group. AJ is a professional and a huge fan. people just say tings because they want to make sense about what happened, especially something unfortunate as this.”

Check out the complete Q&A with B-Fab from K&S WrestleFest via the video embedded below, or by visiting Facebook.com. H/T to Fightful for transcribing the above quotes.

WATCH: B-Fab On Rumors Of Hit Row’s WWE Release: Was It A Message From Vince McMahon To Triple H? (Video)