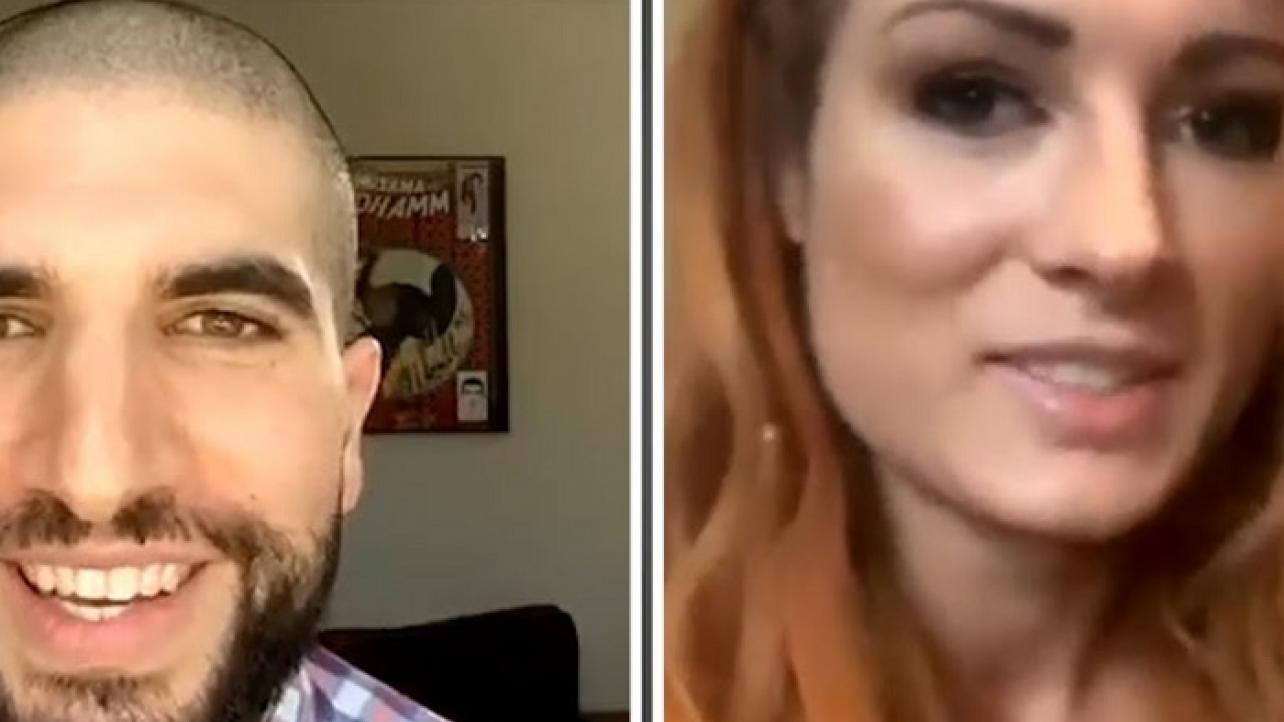 Becky Lynch appears to be pretty banged up following the taping of her WrestleMania 36 title match at the WWE Performance Center in Orlando, Florida earlier this week. “The Man” appeared via webcam for a live interview with Ariel Helwani of ESPN MMA and appeared to have a badly swollen cheek.

The WWE RAW Women’s Champion recently spoke with the veteran MMA journalist for a video that was released via the official ESPN MMA YouTube channel to talk about this year’s taped two-night WrestleMania 36 pay-per-view taking place from an empty WWE Performance Center due to the ongoing Coronavirus Pandemic.

Lynch spoke with Helwani after her WrestleMania 36 match was taped earlier this week on Wednesday or Thursday at the WrestleMania tapings at the WWE PC, and appeared to have some swelling visible on her face during the discussion. Check out some highlights from the interview, as well as a complete video archive of the discussion.

On how it feels to have the biggest show of the year in front of no fans: “I came from the independent circuit, so I’m used to wrestling in front of nobody. I remember wrestling somewhere in Killarney—back in Ireland—wrestling in front of seven people, and I almost think that might be worse because you can hear everything they’re saying. So, there’s nobody there where you might hear some disrespectful comments from time-to-time. I’m somebody who has fed off the energy of the crowd and it’s been my connection with the crowd to get me where I am and I know without those people I wouldn’t be doing what I’m doing. It’s a different shift in your brain, you have to use a different part of you because you know at the other end of it there’s millions of people watching, so you have to connect to them differently. You’re not going to get that same gratification when you go out there in front of an audience and they let you know how well you’re doing, or how well you’re not doing, but they’re responding to you constantly. There’s less self-gratification, but more concentration on the nuances of what you’re message is.”

On what night her match with Shayna Baszler will take place at the two-night WrestleMania 36 PPV on Sat., 4/4 and Sun., 4/5: “I’m pretty certain that it is on the first night that’s on Saturday (4/4). I believe that it’s on Saturday.”

On whether she was concerned about the Coronavirus while taping: “No, I didn’t have any concerns for myself. We setup a very hygienic system and really limited the amount of people that are there. I think the only thing I’m conscientious of is now that we’re back, and we just isolated ourselves for a couple of weeks to make sure we don’t have any symptoms before we go out in the world again. [WWE is] staggering everything, if you don’t have a reason to be there then get the hell out of there. If you have a match or a segment then you’re there with a minimal amount of crew to shoot it. Then, of course, when you come in you’re tested. Your temperature is taken, questionnaire is filled out, and the doctors are there to meet you as soon as you walk into the building.”

(H/T to Wrestling Inc. for transcribing the above Becky Lynch quotes.)