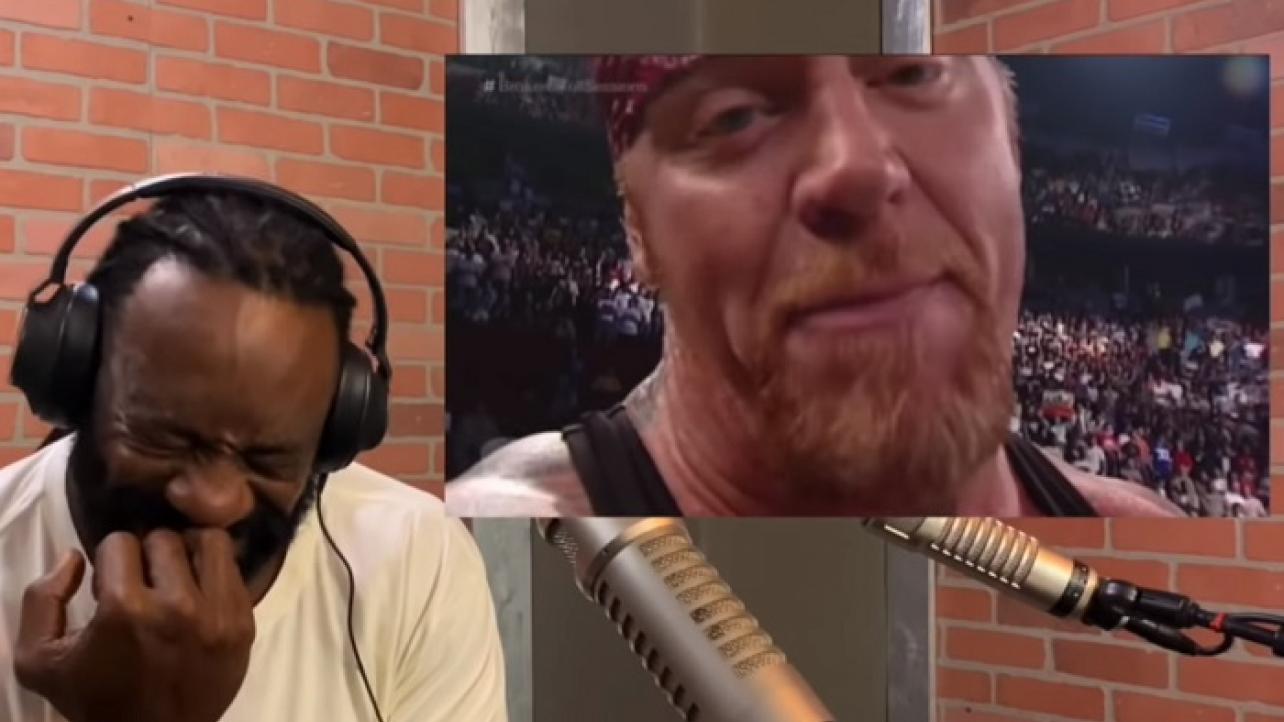 Booker T recently spent some time on his “Hall of Fame” podcast to play the clip and react to The Undertaker and “Stone Cold” Steve Austin watching — and telling the story behind — the infamous “Undertakeroonie” spot after a WWE television taping several years ago during their “Broken Skull Sessions” special on the WWE Network.

The two-time WWE Hall Of Fame legend and former Harlem Heat member played the video, courtesy of the WWE Network, of “The Texas Rattlesnake” and “The Dead Man” watching the infamous segment where The Undertaker was put on the spot live in front of the WWE Universe.

As the clip played we saw the footage, which featured Booker T telling Undertaker in an off-script comment fed to him to say, “I think it’s time for ‘The Undertakeroonie!'”

While watching the video during their “Broken Skull Sessions” sit-down, “The Phenom” shared what he was thinking as the infamous moment was happening to him.

Then we see the moment in the clip where Undertaker, still having yet to respond to Booker T’s “Undertakeroonie” request, go up and talk right to the camera.

“You put ’em up to this Vince [McMahon], and when I get back there,” Undertaker said directly to the camera as the moment was playing out live in front of the WWE fans in attendance in the arena. “I better not see you, ’cause I’m looking for ya!”

While still talking directly to the camera, “The Dead Man” quipped, “Ain’t a chance in hell I’ma get out here and do ‘The Spinaroonie’ .. so you might-better send the cavalry!”

After the footage wrapped up — and after Booker T nearly died from uncontrollable laughter while watching it — the two-time … two-time WWE Hall Of Fame legend gave some more insight into the memorable moment from WWE’s past.

“Man, it was the last match of the night and we were off the air,” Booker explained on the latest episode of his “Hall Of Fame” podcast. “We were literally off the air and one thing we used to do back in the day, we used to love to entertain. So … boom! I’d do ‘The Spinaroonie’ and make the fans happy.”

He continued, explaining to his listening and viewing audience that referee’s in WWE wear ear pieces to feed information from the back, and that in that moment, he was told to drop the bomb on The Undertaker in front of the WWE Universe.

“And the referee’s have ear pieces in and the referee tells me, ‘Tell ‘Taker to do ‘The Spinaroonie’,'” Booker recalled before letting out more authentic belly-laughter. “So I gotta get on the microphone and make a fool … just act a fool of course … and I just love to anyway.”

He continued, quoting himself from the footage, “‘And people wanna see an ‘Undertakeroonie!”

From there, the ending of the infamous moment was detailed by the former multiple-time WWE and WCW World Heavyweight Champion.

“And next thing you know, someone’s music plays and they come out and do ‘The Spinaroonie,'” said Booker T before his co-host asked him, “Didn’t The Rock come out?”

“Yeah, The Rock came out,” Booker T said. “Vince McMahon came out. Everybody came out!”

Watch the clip of Booker T viewing and reacting to the segment from the “Broken Skull Sessions” podcast on his own “Hall Of Fame” podcast below, and check out the full-length “Undertakeroonie” dark segment from WWE’s past embedded in the article above in two separate videos.

For more content and information on Booker T’s “Hall Of Fame” podcast, visit RealityofWrestling.com, or PodcastArena.com.