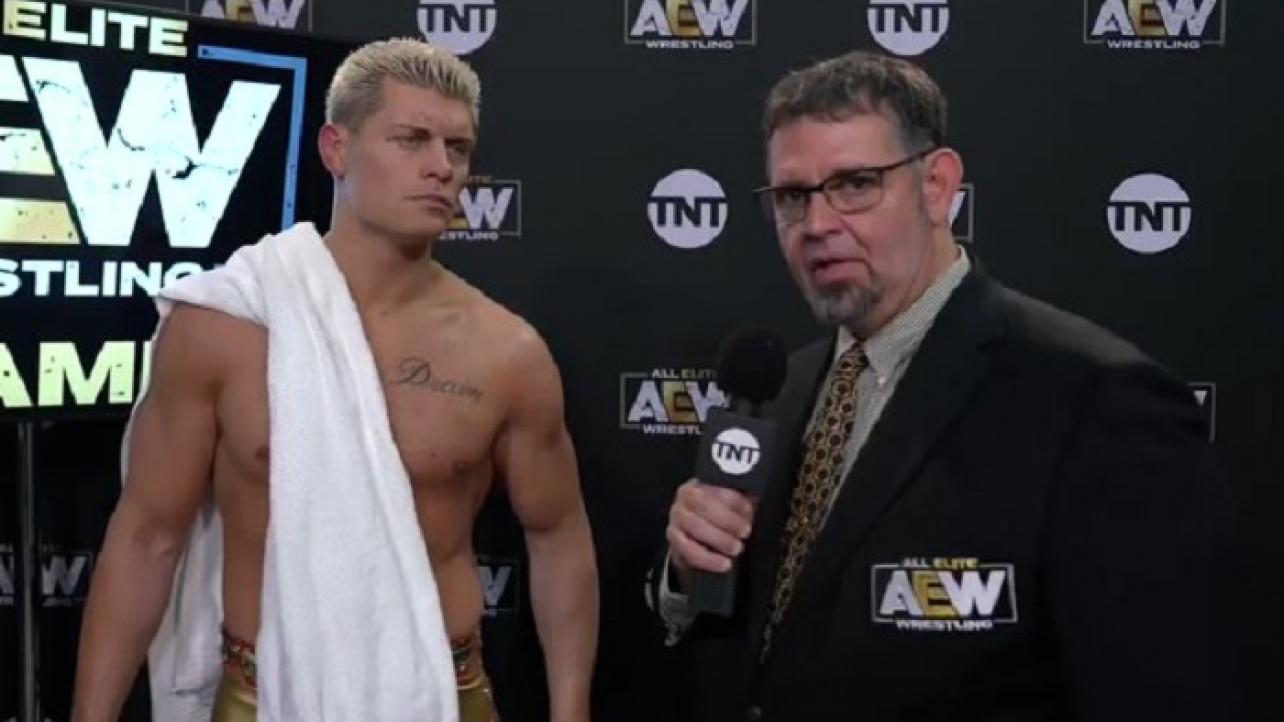 WATCH: Cody Gets Choked Up Talking About QT Marshall Having “Moment” He Has Always Wanted At AEW Dynamite (Video)

Cody gets emotional when he talks about subjects that are close to his heart. When speaking with Alex Marvez backstage at the Curtis Culwell Center in Garland, Texas at AEW Dynamite on Wednesday night, “The American Nightmare” got choked up when talking about QT Marshall finally having the wrestling “moment” he has waited for his entire life.

AEW broadcast team member Alex Marvez caught up with AEW EVP and active talent Cody shortly after his tag-team match alongside QT Marshall against The Butcher and The Blade on this week’s AEW Dynamite show at the Curtis Culwell Center in Garland, Texas for a backstage interview.

During the brief chat between Cody and Marvez from the 12/11 edition of AEW Dynamite, “The American Nightmare” praised the performance of his partner QT Marshall despite coming up short in their tag-team match against the aforementioned new AEW duo, which also featured the repackaged Allie as “The Bunny.”

“I’d be remiss if I didn’t say just how special what happened was,” Cody told Marvez after the show. “I’m talking about going from undesirable to undeniable. I’m not even hearing my own words. A guy went out there and they were chanting “Cody’s partner” and by the end of the match they were chanting his name.”

Cody would continue after getting momentarily choked up and emotional while describing QT Marshall’s performance and finally having the wrestling “moment” he has wanted his entire life.

“That’s what wrestling is all about,” said Cody. “It really is. That’s it. You get the chance to hand it off to somebody because anytime somebody handed it off to me whether it was Randy, Bob, my dad, Dustin, it doesn’t matter. I thought I’d hand it off to him…and even in a losing effort it still felt good.”

Rhodes would re-tweet the interview on his official Twitter page after the show with a caption that reads as follows:

“Got a little choked up for a second there ha,” said Cody. “When magic stuff like what transpired in our match goes down, you can’t take it for granted. Ever.”

Check out his full comments below, including his response to Darby Allin offering his hand as a future teammate.

Got a lil’ choked up for a second there ha.

When magic stuff like what transpired in our match goes down, you can’t take it for granted. Ever. https://t.co/OOm4ZEYbN7

WATCH: Cody Gets Choked Up Talking About QT Marshall Having “Moment” He Has Always Wanted At AEW Dynamite (Video)