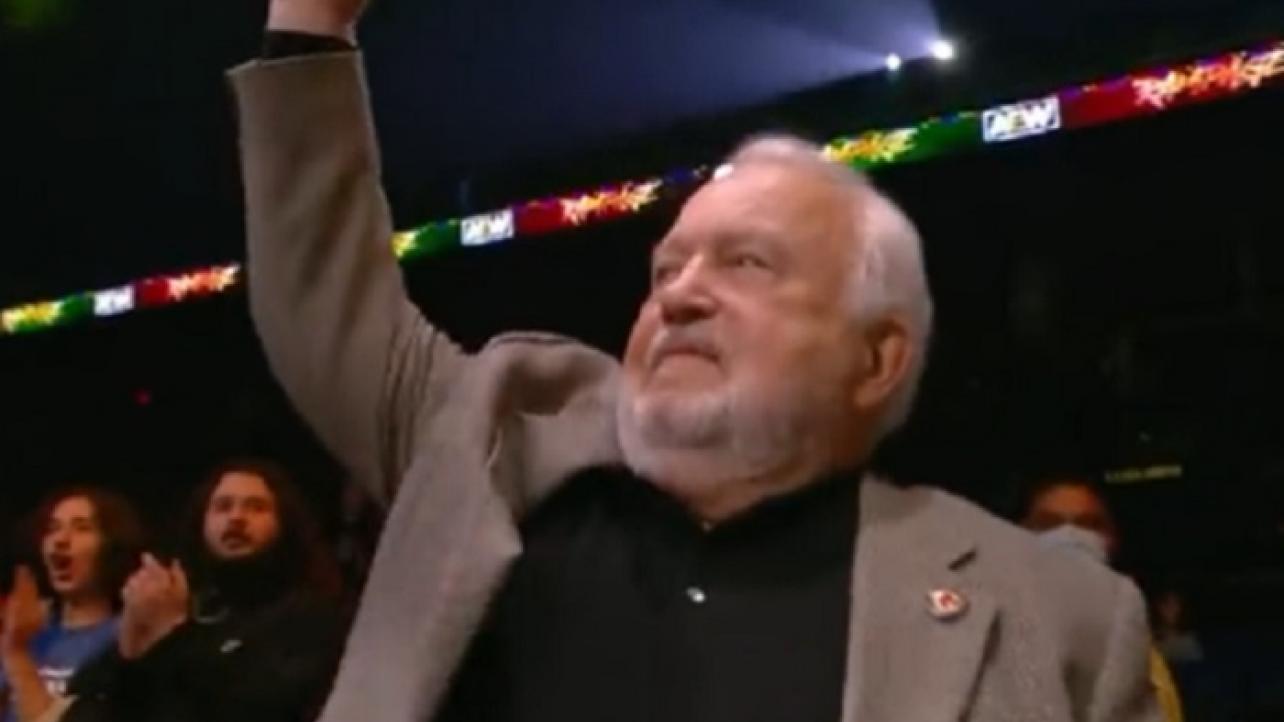 A pro wrestling legend made a special appearance on the AEW Rampage: Holiday Bash show on Saturday evening.

During the special Holiday Bash-themed edition of Rampage on TNT on Christmas evening, legendary pro wrestling figure David Crockett made a brief on-camera appearance as a special guest sitting at ringside for the TNT Championship main event pitting Sammy Guevara against Cody Rhodes.

He was acknowledged on the broadcast by the commentary team, as well as by ring announcer “The Dapper Yapper” Justin Roberts.

After the match concluded, Crockett returned to the ring to present the winner, Cody Rhodes, with his TNT Championship title belt. The two shook hands and hugged as Cody celebrated becoming the first-ever three-time TNT Champion, as well as the final TNT Champion for the last AEW on TNT shows next Wednesday and Friday with the New Year’s Smash specials.

Check out videos and photos of David Crockett’s special cameo appearance on the Holiday Bash-themed edition of AEW Rampage on TNT from historic Greensboro Coliseum in Greensboro, North Carolina via the tweets embedded below.

The legendary #DavidCrockett appears on the special #HolidayBash edition of #AEWRampage before and after the main event of the #AEWonTNT program! View #PHOTOS of his #AEW debut appearance below~! pic.twitter.com/L4285GwHT9

…and NEW #TNT Champion — @CodyRhodes! “The American Nightmare” defeats @sammyguevara to capture the title as first-ever TWO-TIME @tntdrama Champion and will be the final #TNTChampion heading into the last-ever #AEWonTNT shows next week on #Dynamite: #NewYearsSmash (#PHOTOS) pic.twitter.com/yxOK8h2ki2

David Crockett presents the @AEWonTNT Championship belt to #CodyRhodes closing out the #AEWRampage: #HolidayBash #CodyRhodes rolls into #AEWDynamite this WEDNESDAY night at 8/7c on TNT as TNT Champion on the Final Dynamite on @tntdrama pic.twitter.com/V7NS1ne7TU