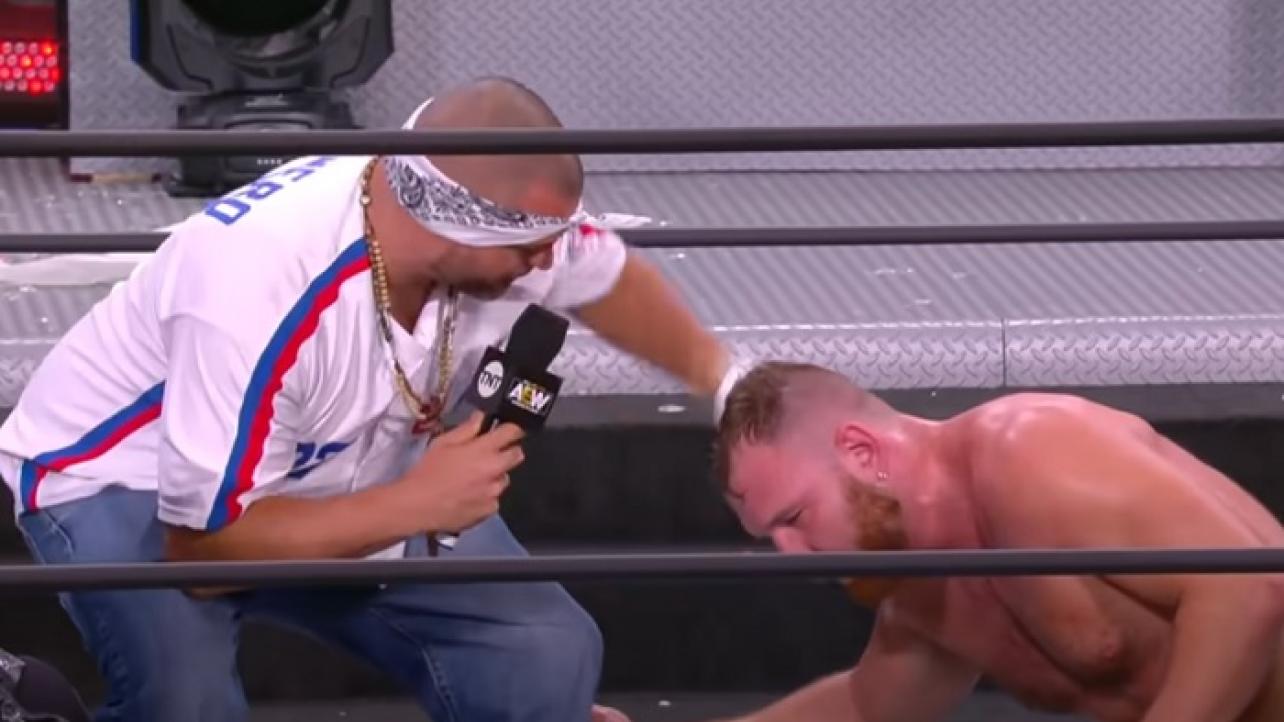 Eddie Kingston cut a promo after this week’s AEW Dynamite One-Year Anniversary Special episode went off the air on TNT that has gone viral within the pro wrestling community online and via social media.

This week’s special anniversary edition of AEW Dynamite on TNT closed with Kingston choking out AEW World Heavyweight Champion Jon Moxley after his successful title defense against “The Murder-hawk Monster” Lance Archer in the main event of the show, before going on to declare himself the next challenger for “The Purveyor of Violence.”

After the television broadcast concluded, inside Daily’s Place amphitheater in Jacksonville, Florida, the action inside the squared circle was far from over, as Kingston would continue talking trash at Moxley, as well as AEW Dynamite on TNT commentator Excalibur, in an epic promo that was thankfully caught on camera by a fan in the limited-capacity crowd at the show.

The fan would then upload the video on his Twitter page, which has a run-time of one-minute and 45-seconds, and it immediately caught fire.

“Excalibur, you want to talk bad about me again? I’ll rip your tongue out of your face,” said a worked-up Kingston after the Wednesday, October 14, 2020 episode of AEW Dynamite went off the air. “This is what you want huh? Big bad Jon Moxley. Ladies and gentlemen ‘boo’ me all you want, but this son of a b*tch sold out!”

Kingston continued, “He said to me the day he signed that contract to go to the land of the sports entertainers, you low life! You told me that the inmates were going to run the asylum, you son of a b*tch! You’re going to pay for leaving me behind!”

After watching the clip, an additional fan of All Elite Wrestling would post about the promo, tagging AEW President Tony Khan to ask him for a high-quality version of the video to be released so that all pro wrestling fans could enjoy the memorable promo from Eddie Kingston.

“Of course,” Khan responded, to the excitement of many other fans following the social media exchange. “While I hugely value the socially-distanced fans wearing protective masks who attend our shows, cheer from their seating pods [and] add so much to the show [and] inspire the wrestlers in their matches, bless you all, I also assure you that promo wasn’t only for the live house.”

While the HQ video of Eddie Kingston’s off-air promo from after the AEW Dynamite Anniversary Special on TNT is not yet available, you can watch the fan-uploaded version of the 1 minute, 45-second video containing the post-show promo from the AEW star via the Twitter post embedded below.

Pretty sure they went past airtime but a lot of passion in Eddies voice with this speech. #AEWDynamite #AEWAnniversary pic.twitter.com/INuyeraMgF

Of course. While I hugely value the socially distanced fans wearing protective masks who attend our shows, cheer from their seating pods & add so much to the show & inspire the wrestlers in their matches, bless you all, I also assure you that promo wasn’t only for the live house