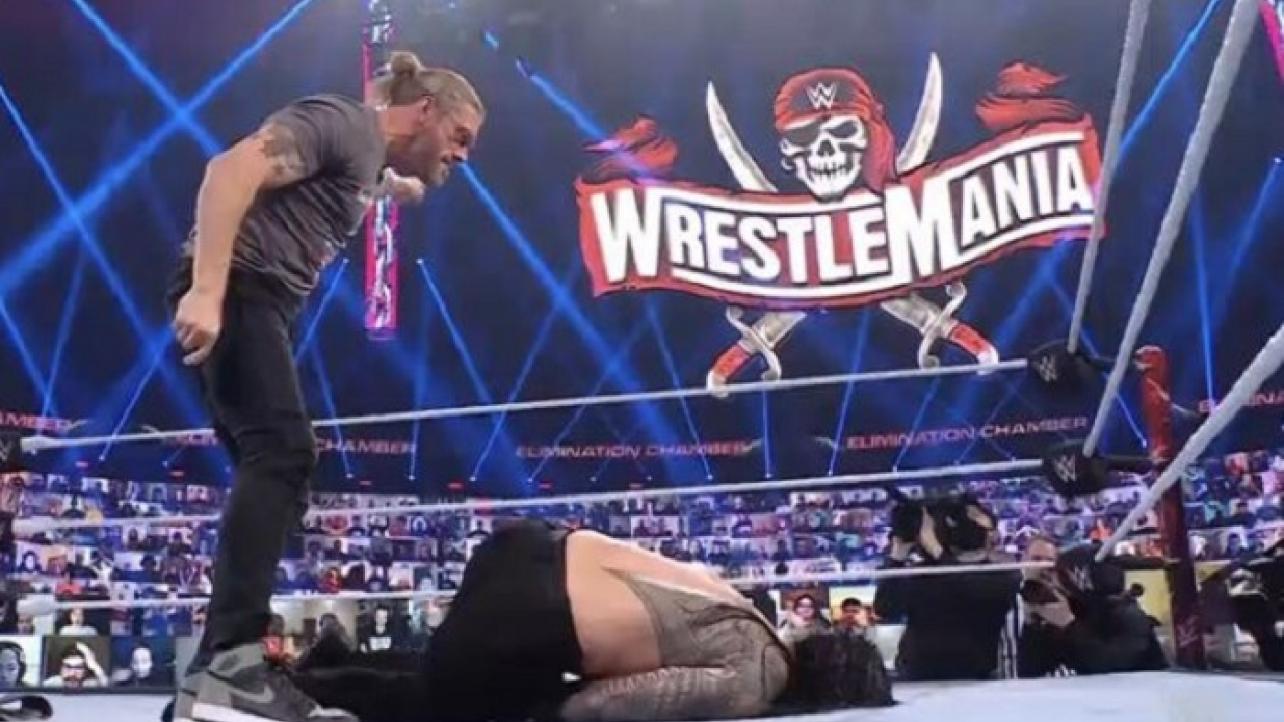 It looks like “The Rated-R Superstar” has made his decision regarding the championship he will pursue on “The Grandest Stage of Them All” later this year.

During the closing moments of his match, “The Tribal Chief” posed on the ropes with his title as Paul Heyman watched on with approval, only for his party to be spoiled at that moment by Adam Copeland.

The pro wrestling legend hit the ring, taking out “The Head of the Table” with a big Spear. He then stood over the reigning Universal Champion and pointed to the WrestleMania 37 sign hanging in the rafters as fireworks and pyro erupted and exploded around it.

The commentators during the segment seemed to all but confirm the fact that Edge will be challenging Roman Reigns for the WWE Universal Championship in a one-on-one title match showdown at WrestleMania 37 in April.

Featured below is a recap of the segment from our WWE Elimination Chamber recap here at eWrestling.com:

Once the match wraps up, Roman Reigns continues posing with his title as he climbs the ropes in the corner. Then, out of nowhere, “The Rated-R Superstar” Edge arrives on the scene and he takes out the WWE Universal Champion with a big Spear.

He stares down at Reigns as he is curled up in pain. The fireworks explode near the WrestleMania 37 sign as Edge reveals he has made his decision as to which title he will be going after on The Grandest Stage of Them All later this year.

That’s right folks, Edge vs. Roman Reigns for the WWE Universal Championship is now set for WrestleMania 37. He stares at Reigns and Heyman who are still recovering in the ring as he looks fired up at the top of the entrance way.

The commentators talk us through the highlights that air again, showing Edge’s big Spear on Reigns and his point to the WrestleMania 37 sign as his indication that he has made his decision and will be challenging The Tribal Chief for his title at WrestleMania.

Featured below are video highlights of the Edge and Roman Reigns segment from the WWE Elimination Chamber 2021 pay-per-view setting up their WWE Universal Championship match at WrestleMania 37.

Will it be SPEAR vs. SPEAR at WrestleMania? #WWEChamber