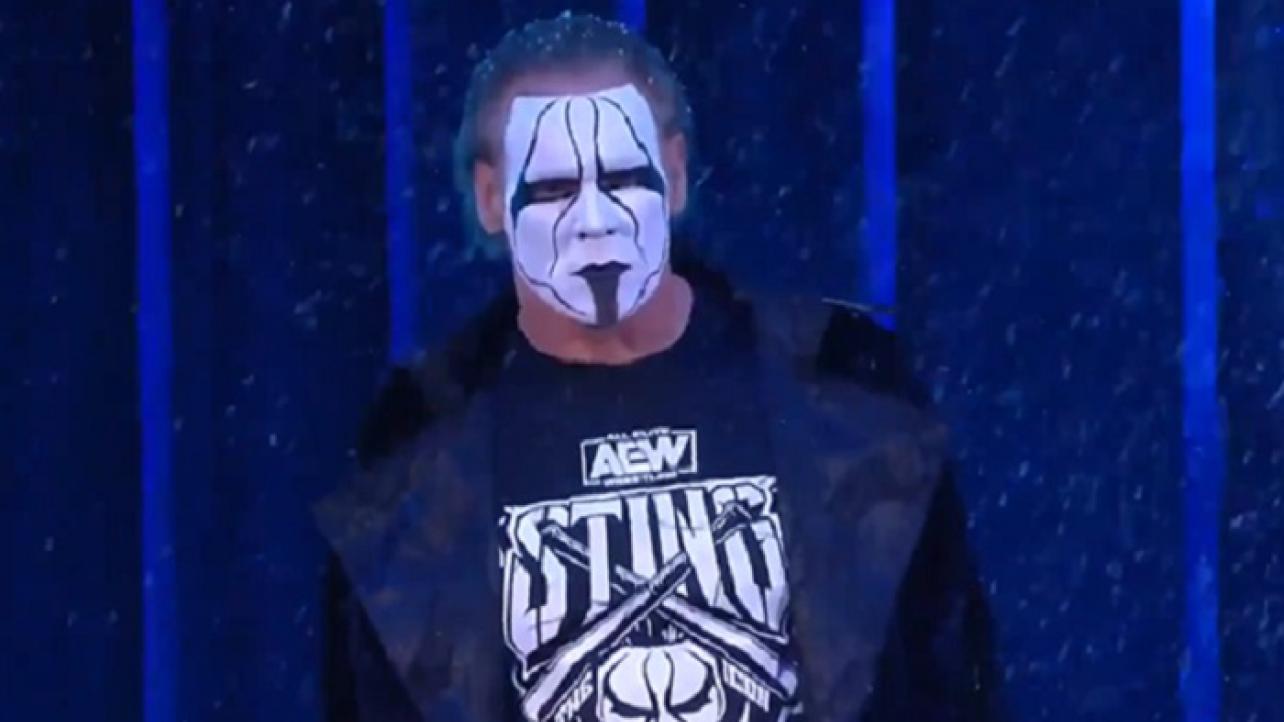 “The Icon” has arrived in All Elite Wrestling.

WWE Hall of Fame legend Sting made his surprise AEW Dynamite debut during the “Winter Is Coming” special episode on TNT on Wednesday night.;

Featured below is a complete recap of the post-match segment that followed Darby Allin and Cody Rhodes’ victory over “Team Taz” members Ricky Starks and Powerhouse Hobbs.

After The Match: Chaos Ensues As STING Arrives!

After the match we see Hobbs with a sneak attack from behind. As Arn Anderson loses his cool, he comes into the ring and Hobbs ends up getting some heel heat by attacking the legendary “Enforcer.”

Now Dustin Rhodes hits the ring to try and even things up, but ultimately Team Taz has the numbers advantage with Starks, Hobbs, Brian Cage and Taz in the ring. Taz holds up the FTW Championship. Taz demands the guys hoist up Cody. They do.

As they pick up Cody, the lights go out. When they come back on, a cool video starts playing showing trees and other landscapes while some music plays and the lights stay low in the amphitheater. The name STING then appears on the big screen.

Holy sh*t! Out comes “The Icon” Sting as snow falls inside the Daily’s Place amphitheater in Jacksonville, Florida. The fans in Jax go nuts as Sting pulls a bat out from his side and begins walking down the ring to even up the odds in favor of justice.

The announcers go nuts, as do the fans, which we see various camera shots of. Finally, Sting enters the ring and approaches Arn Anderson. He stands nose-to-nose with him and Arn is in disbelief.

Sting turns and walks over to some of the fallen bodies in the ring. He acknowledges Dustin and then Cody, who he looks at without showing any emotion.

He walks over to Darby Allin now, the man he is often compared to. Sting and Allin go nose-to-nose and Sting turns and looks at one side of his face with the similar paint and then the other side without the paint. This feels like an enormous moment, by the way. Huge.

“The Icon” does his trademark howl to the fans, who do it back, and then he repeats this a few times before picking his baseball bat up and exiting the ring. He doesn’t seem to show any true alliance or emotion other than to the fans, leaving many to question what his purpose in AEW is.

He exits up the ramp, turning one final time to look at the ring before heading to the back. On that note, we head to a commercial break.

‼️ For the first time in EIGHTEEN YEARS, @Sting is back on @tntdrama ‼️ #AEWDynamite pic.twitter.com/jjWF6dr6Pk