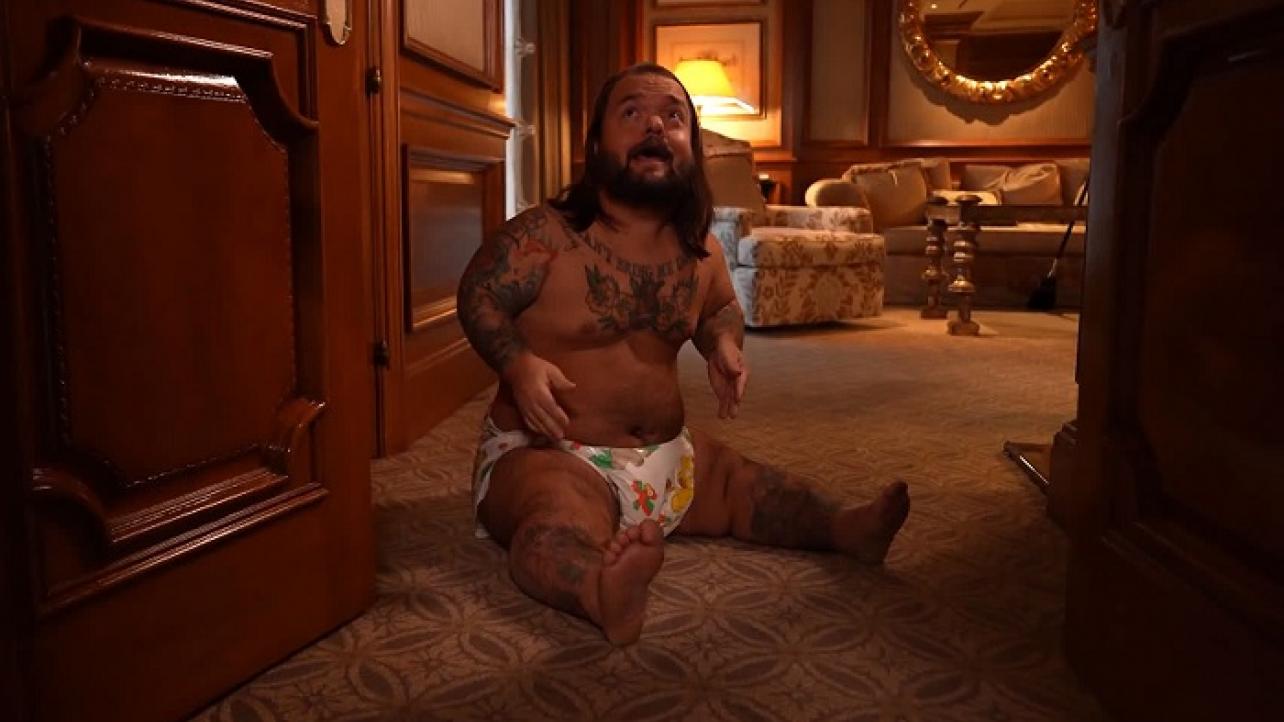 As advertised, The Inner Circle “slayed” Las Vegas, Nevada on this week’s edition of AEW Dynamite on TNT.

The show featured two separate video package segments in the first hour that included various highlights of their recent trip to “The City of Lights” to celebrate the addition of two new members to the group — MJF and Wardlow.

We saw the seven-person group having fun as always, with the typical banter and in-fighting from MJF and Sammy Guevara, while Friedman tries sucking up to group leader “Le Champion” Chris Jericho.

The segments were shot in complete parody style, with the Inner Circle clearly spoofing “The Hangover” comedy film trilogy from Tom Phillips, complete with the group waking up hungover the next day and discovering a crying (“little person”) baby in a closet.

Who was the little person, you ask? Well, it was none other than the Bastard Son of Vincent Kennedy McMahon.

Former WWE Superstar Hornswoggle, a.k.a. Swoggle (Dylan Postl) was the person who portrayed the little-person dressed up as a baby that the Inner Circle found in a closet at the end of the segment.

Watch the complete “Inner Circle Slays Las Vegas” parody of “The Hangover” movies from the Wednesday, November 18, 2020 episode of AEW Dynamite on TNT via the tweets embedded below courtesy of the official feed of All Elite Wrestling.

“There’s no such thing as Dragons, @Konnan5150” – @IAmJericho.
Pt1 of the Inner Circle’s trip to Vegas started to get interesting…Pt2 coming later in the night!

Okay @IAmJericho and the Inner Circle definitely know how to do Vegas #AEWDynamite on @tntdrama pic.twitter.com/4kpHwzc44D

This uh… this doesn’t sound like a good idea… @The_MJF @IAmJericho #AEWDynamite on @tntdrama pic.twitter.com/qqQIuNIuYx

The Inner Circle have bigger problems than just a terrible hangover.
Watch #AEWDynamite NOW on @TNTDrama or https://t.co/GdI7QAsxEP for our Intl fans. pic.twitter.com/AtNYG6LXup

Add this one to the best #AEW gif competition #AEWDynamite pic.twitter.com/AU43xoeq6T

Who will the newest member of the Inner Circle take on in his first #AEWDynamite match? pic.twitter.com/K5ZmDmlXpq