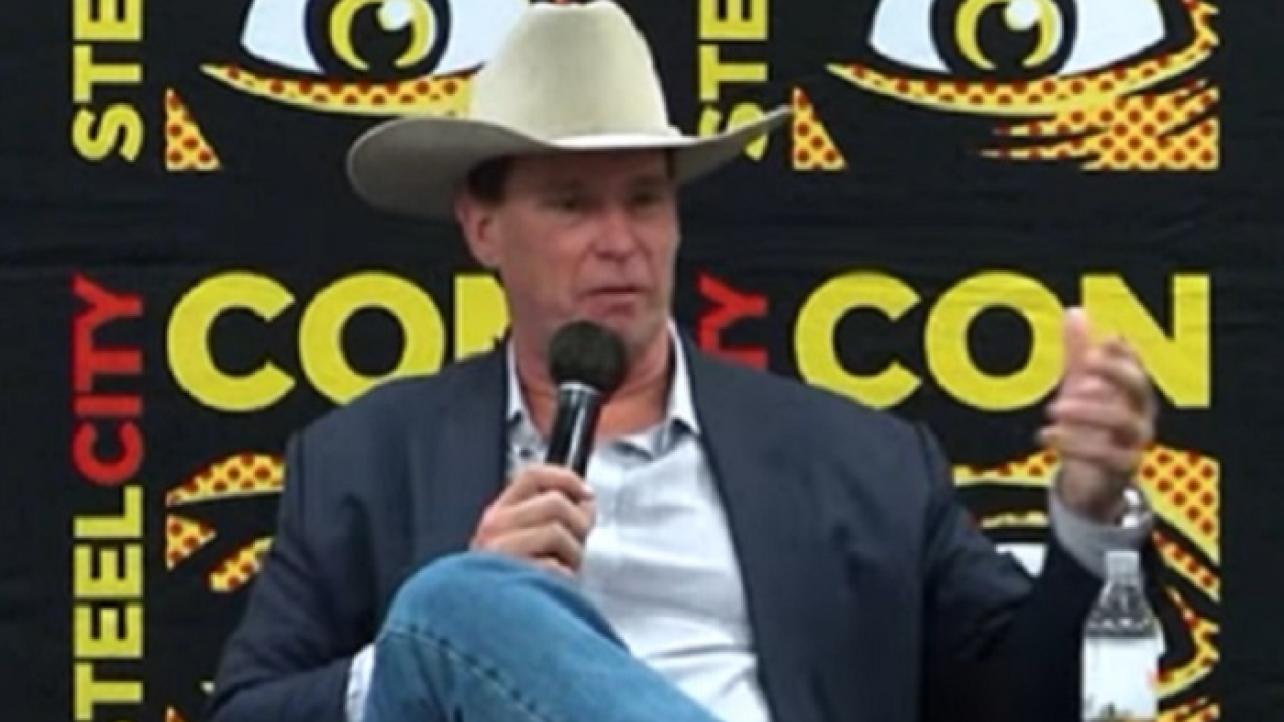 JBL recently took part in a Q&A along with fellow WWE Hall of Fame legend Kane at the Steel City Con event, during which, he spoke about a number of pro wrestling related topics.

While at the appearance, the longtime WWE personality shared a number of stories from his legendary career, including a few involving his time as a commentator alongside Michael Cole — such as Vince McMahon blowing up on Cole during a live television broadcast, Titus O’Neil puking on him at a show and more.

Featured below are some of the highlights from the appearance, as well as a complete video archive.

On Michael Cole accidentally mishearing Vince McMahon, which led to Vince blowing up at him during a broadcast: “I’ll tell you a funny story. We were sitting in the back one time with Vince and Jimmy Snuka’s son was debuting and Vince said, ‘Be sure you say when he comes in that’s Jimmy Snuka’s son.’ Now later we tried to say that but Vince goes on to say, ‘The last thing you want to say is he’s Jimmy Snuka’s son because he can’t live up to the fact that Jimmy Snuka was his dad. Later they tried that because he didn’t really work out. They tried. But Michael Cole took copious notes. So he’s writing down, ‘Jimmy Snuka’s son.’ I don’t even notice it. As soon as the kid tags in Michael Cole says, ‘in comes Jimmy Snuka’s son.’ Vince had just told him don’t say Jimmy Snuka’s son. We’ll when he says that, they’ve got the little God cam where they can look at us. I start laughing because I realized Cole doesn’t know not to say that. Vince sees me laughing and thinks Cole is making fun of him in front of the entire company. Vince’s response was, ‘Michael, I’m gonna come down there and I’m gonna fire you. No, I’m gonna come down there and I’m gonna kick your ass — No, I’m not.’ He’s debating with himself at this point and he goes, ‘No, no, no, no, no, no. I’m gonna kick your ass and then I’m going to fire you. That’s what I’m gonna do. I’m coming down right now.’”

On how Vince immediately apologized for misreading the situation: “Michael’s just looking at the camera like, and I’m dying laughing and there’s no commentary. Then by the time the commercial comes around, there’s no commentary to match. Vince realizes what happened that Michael did it by mistake. He goes, ‘Haha, I lost it a little bit there didn’t I? Ha!’

On how Titus O’Neil once puked on Cole during a show: “We had so many different times on commentary where they would do stuff to Michael Cole but they wouldn’t do it to me and I’d be in on it. Finlay hit him with the shillelagh — I mean, they abused Michael Cole for years. Titus O’Neil threw up on him one time. Titus was supposed to drink this pea soup and spit the pea soup out on Michael Cole. Well, he thought he was supposed to drink it and actually throw up. So he drinks it and throws up on Cole. Titus actually threw up on him on live television and Michael is out there with puke all over him and he says, I feel like I’m in a freaking frat party back in college. Vince goes, don’t acknowledge it. Don’t say anything about it. Michael is like, I’m covered in puke. You had a guy puke on me and you don’t want me to talk about it?!”

Check out the complete JBL Q&A appearance at Steel City Con via the video embedded below, or at YouTube.com. H/T to Fightful for transcribing the above quotes.