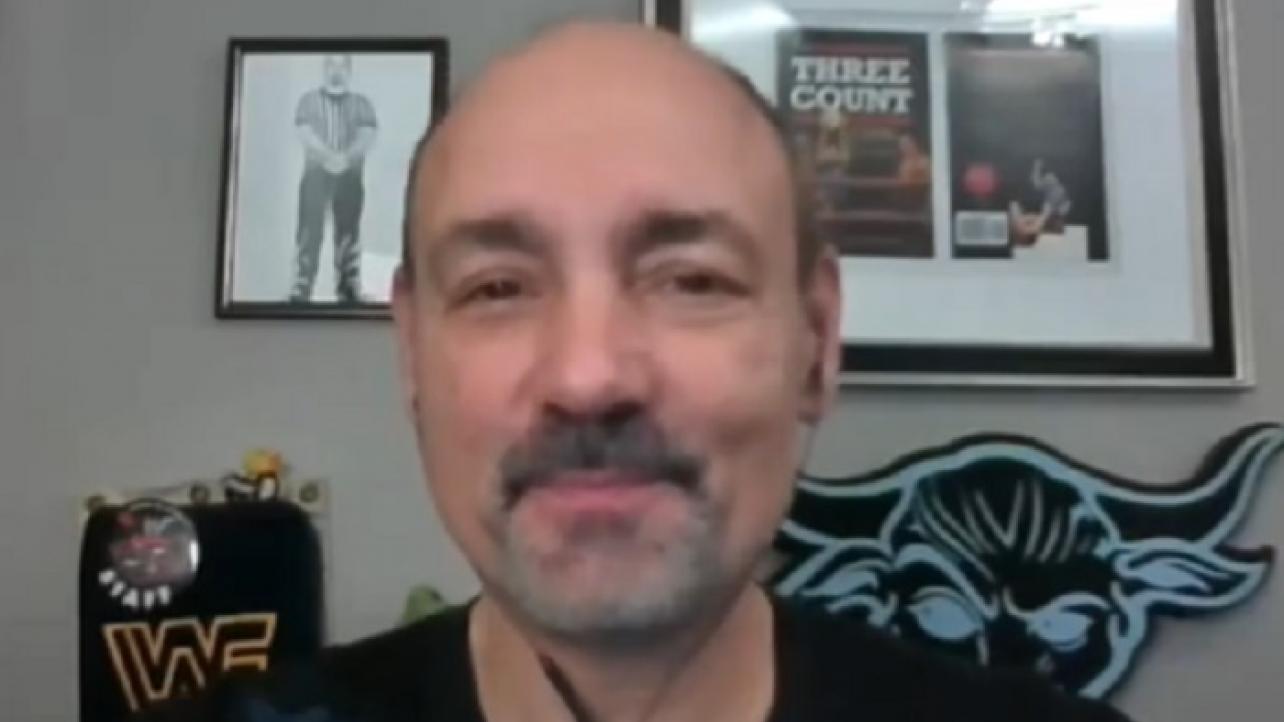 WATCH: Jimmy Korderas On Why Edge Is An Excellent Babyface, First Impressions Of The Miz (Video)

Jimmy Korderas recently appeared as a guest on the Sports VIBEtalks show on VIBE 105.5FM in Toronto, Ontario, Canada for an in-depth interview covering all things pro wrestling.

During his appearance on the radio program, the former longtime WWE referee explained why he feels Edge is an excellent babyface performer.

Additionally, Korderas spoke about his initial impressions when seeing The Miz, how they have changed and how he has learned how to behave properly.

Featured below are some of the highlights from the interview where he touches on these topics with his thoughts, as well as a complete video archive of the discussion.

On why he thinks Edge is an excellent babyface: “You could tell that he is having fun and he is enjoying it and you can feel it. It’s reflecting on us that he is having a great time and above all, from a business standpoint, he’s getting the reaction that the company desires. He comes out and he gets a huge pop and that’s a genuine thing. Again, feeding off that crowd reaction like we were talking about earlier. When he goes to the ring, he’s a great talker. It’s one of the things I don’t think people give him enough credit for. I think he’s very underrated for his promo ability – he’s a great talker. He tells great stories in the ring because that’s what it’s meant to be. I love using this line and I’ve said it I don’t know how many times like Rip Rogers said back in the day ‘in pro wrestling, we don’t sell motion, we sell emotion.’ Edge is one character that gets you emotionally invested in him as a babyface and he’s brilliant at it.”

On his initial impression of The Miz and how it has changed over time: “It definitely changed because I was there they referenced it in the promo – the infamous chicken eating incident. I was there and witnessed it. Because I don’t wanna give away whose bag he was eating the chicken over, but I was walking with him into the locker room when we both saw him there I just went ‘ohhhhh no.’ Ahh…I’ll say it Scott Armstrong. Here’s a legend, a veteran, a family name of Armstrong. Man, I’m giving this away – I can’t believe it. Scotty looked over at him and he looks at me he goes, ‘he’s eating chicken over my bag?’ And then he just looks at Miz and says, ‘hey, don’t forget to get the bones down there in the corners of the bag,’ and Miz just laughed right. And he (Scott) just went, ‘I’m gonna kill him,’ and William Regal came over and we both said ‘Scotty, calm down. And that’s when one of the veterans of the locker room decided it was time for Miz to change in a broom closet and he got kicked out of the locker room for a while. That’s when I thought to myself this kid ain’t going to last. He ain’t gonna be here long.”

On The Miz eventually learned how to properly behave: “But you know, I give him a lot of credit. He stuck it out. He took all the you know what that everybody gave him and he learned. He learned how to interact in the locker room, how to be one of the boys in the back, and all that sort of stuff. I give him a lot of credit and he’s actually pretty good. He’s a pretty good talent – he’s very entertaining – and again you talk about believability, when he talks and he acts like a jerk, you believe that he’s a jerk.”

Check out the complete interview via the video embedded below, or by visiting YouTube.com.

WATCH: Jimmy Korderas On Why Edge Is An Excellent Babyface, First Impressions Of The Miz (Video)