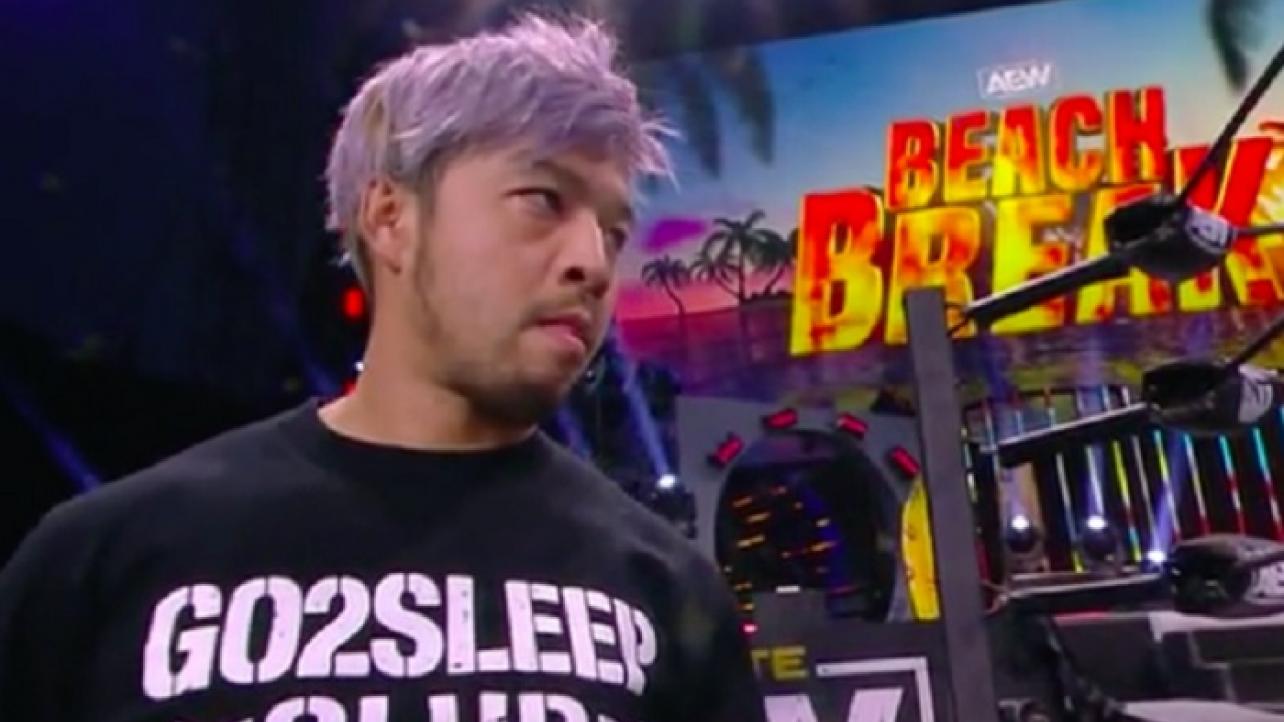 KENTA is All Elite.

The New Japan Pro Wrestling (NJPW) star and former WWE NXT Superstar known as Hideo Itami made his promotional debut for All Elite Wrestling during the closing moments after their main event on this week’s Beach Break special on TNT.

KENTA came out after Kenny Omega and The Good Brothers defeated the team of Jon Moxley, Rey Fenix and “The Bastard” PAC in the AEW Dynamite: Beach Break 2021 main event.

The former Hideo Itami came out and blindsided Moxley before hoisting him up and blasting him with his trademark Go2Sleep finishing move to end the show.

Featured below is a recap of the AEW Dynamite: Beach Break 2021 main event and post-match segment, which saw the AEW promotional debut of KENTA.

We head back inside the Daily’s Place amphitheater in Jacksonville, FL. where we hear the familiar entrance tune of the first of our two teams of three competitors for tonight’s AEW Dynamite: Beach Break main event.

With that said, AEW World Champion Kenny Omega and the IMPACT Wrestling Tag-Team Champions, The Good Brothers, make their way down to the ring. As they settle into the squared circle for the final bout of the evening here at the Beach Break special, the commentators lead us into another pre-match commercial break.

We’re back from the break and we see that Don Callis, the manager of Omega and the Co-Vice President of IMPACT Wrestling, has joined J.R., Schiavone and Excalibur as a special guest commentator for our headline bout of the evening this week.

Finally, we hear the familiar sounds of the entrance theme of the former AEW World Champion. On that note, Jon Moxley emerges from his usual special location in the venue here at Daily’s Place. He is joined by Rey Fenix and “The Bastard” PAC from Death Triangle, as the trio all head to the ring together.

Our main event of tonight’s AEW Dynamite: Beach Break 2021 special event is now officially underway, as the bell sounds to get this one going. Early on, neither team is able to establish any real offensive advantage, however it isn’t long at all before the baby face trio start to take over. Moxley is now the legal man in the ring and he is taking it to Karl Anderson of The Good Brothers, putting the boots to him here in the early goings.

As the match starts to develop, we see some behind-the-referee’s back heel tactics and double-team spots from Omega and The Good Brothers that help move them into the offensive driver’s seat in this one. Finally, as Mox helps the baby face trio take back over the offensive control in the bout with a big spot on the floor outside the ring on the AEW World Champion. On that note, J.R. leads us into a mid-match, picture-in-picture commercial break, as the action continues with Omega and Moxley brawling outside of the ring.

When we return from the break, we see the heels are dominating the action in the ring, as they are taking it to Moxley, with each guy taking turns tagging out and letting someone else add additional punishment to widen their gap in the lead. Finally, Mox starts to show some signs of life. He is able to make a much-needed tag.

In comes Rey Fenix, as he takes the hot tag and is taking out bodies left-and-right. He starts blasting Omega with a wide-variety of kicks and then in comes “The Bastard” PAC with a crazy high spot, which Fenix follows up by hitting an insane dive from the ring to the floor to take out both of The Good Brothers.

The camera pans back in the ring, which shows Fenix taking it to Omega as he has the champ grounded and is working some mat tactics on the top dog in the AEW men’s singles division. Omega ends up killing Fenix’s momentum with a modified snap-dragon suplex that he hits beautifully and with authority before rolling out of the ring to catch a breather. When he rolls back in, he makes the tag to Gallows and the big man comes in and picks up where he left off.

Fenix ends up making the tag to “The Bastard” PAC and he immediately starts to shift the offensive momentum into his team’s favor. Just as he starts to seem to be putting together a nice offensive run, he is the victim of some double-team action courtesy of the IMPACT Wrestling World Tag-Team Champions. Omega ends up joining in and helping with a big spot, which prompts J.R. to point out that the ref’s patience and willingness to allow this match to go off the rails is being tested to the limit, as the heel trio continue to break the rules without any consequences.

Finally, the baby faces do the same in a clear case of “if ya can’t beat ’em, join ’em,” and we see Moxley, Fenix and PAC all take turns hitting Omega in the corner of the ring while The Good Brothers are laid out at ringside. PAC hits a crazy suplex into a bridge for a pin attempt, however Omega manages to kick out before the count of three to keep himself, and his team, alive in this Beach Break main event, which is turning into an absolutely excellent match — as one would expect when seeing these six names on paper.

Fenix starts firing up and he sends Anderson to the floor. He builds up a full head of steam and hits a crazy dive from the ring to the floor to take him out. In the ring, Moxley is looking for the Paradigm Shift on Omega as PAC is in the middle of climbing to the top-rope. Things don’t go as they planned, as Omega avoids being finished off. He makes a much-needed tag to Anderson. Fenix is now the legal man for his team. Fenix and Anderson trade shots and Anderson pulls ahead before Gallows and Omega join him for a three-on-one attack on Fenix. Finally we get to the finish, which sees Omega and The Good Brothers get the win after the AEW champ hits the V-Trigger following a Magic Killer from the IMPACT tag champs.

After The Match: KENTA HAS ARRIVED!

In comes KENTA out of nowhere after the match following a Lance Archer post-match beatdown spot. He hoists Mox up and blasts him with his trademark Go2Sleep finisher.

Watch video footage of KENTA’s debut at the AEW Dynamite: Beach Break special from 2/3 via the tweets embedded below.