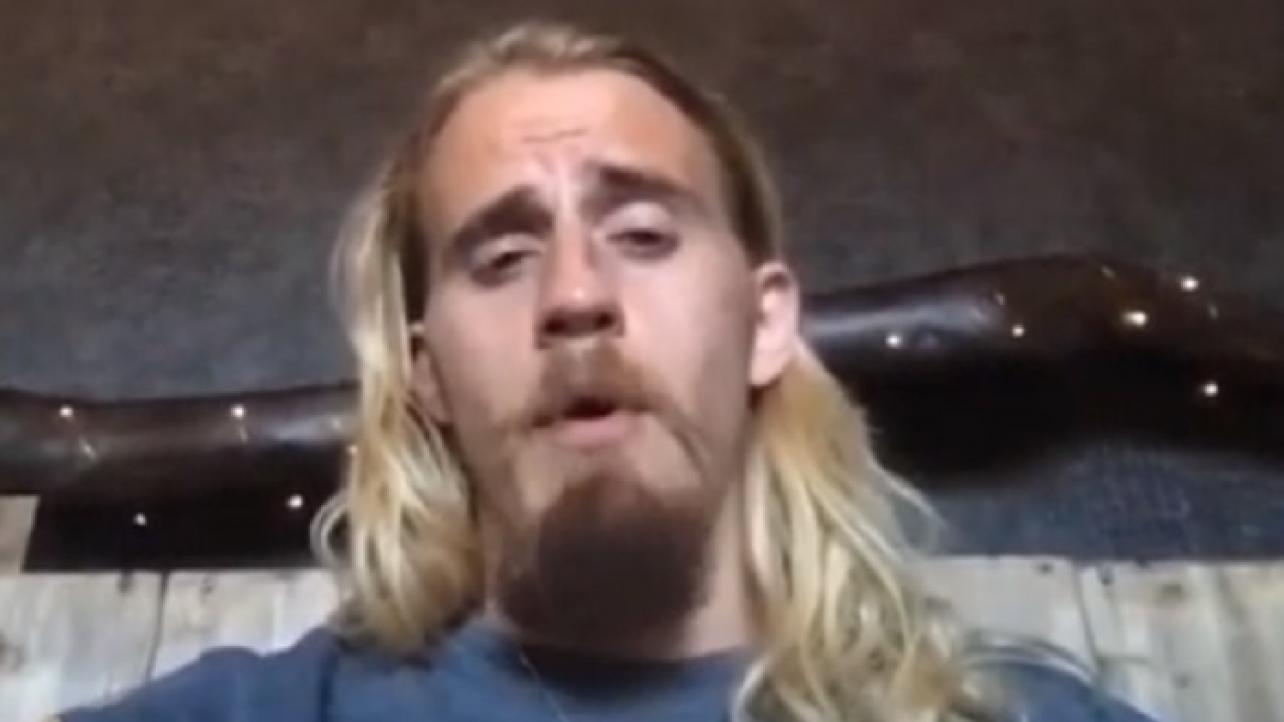 Ring Of Honor star Mark Haskins recently appeared as a guest on “Andrew Thompson Interviews” at Post Wrestling for an in-depth discussion, which included a cool story about him pulling a prank on Marty Scurll at a ROH show, the big meeting the promotion recently held in Baltimore, Maryland and more.

Featured below are some of the highlights from the new Mark Haskins interview.

On pulling a prank on Marty Scurll at a Ring Of Honor show: “I found this hilarious although Marty didn’t. So basically we had a show in San Antonio and he had the worst upset stomach ever. He was telling me, ‘I think I’ve got the flu or something like that down in Mexico’ and I was like, ‘Okay,’ and the match before us was still finishing up and he really needed the bathroom and I was like, ‘Don’t worry mate, you’ve got time. I’m gonna take a lot of time with my entrance. I’ll buy you some time. If you need the bathroom, you go.’ He’s like, ‘Ahh! Thanks man, I appreciate it.’ I’m like, ‘Yeah man, no problem.’ As he walks away, I have never hit the ring quicker in my life. The Ultimate Warrior couldn’t have caught up with me. I stormed to the ring, arms up, arms down, turn around, face the entrance way. Like give them no reason to keep the camera on me. His music starts playing and apparently, he literally just got to the bathroom and sat down as he hears his music playing and I’m in the ring and I’m smiling and I think everybody else was like, ‘Where’s Marty? He’s really making ‘em wait for this intro tonight.’ He finally comes out and we have the match and I found it funny even if he didn’t. I think he just kind of rolled his eyes like, ‘Ohh Haskins!’ Like, ‘This again?’ I’ve known Marty for years, he’s been one of my closest friends. Years ago, I used to sleep on his couch and we used to train together so, when he moved out to [the United Kingdom], [he] was based down in Chichester and we used to train in Portsmouth which was about 20 miles away so, I’d travel down, I’d spend time at his place. We’d work out together, we’d eat together, we’d go train in a ring together and stuff and we did that for about a year so, he’s one of my closest friends at that point so, I’m just a pain in the ass.”

On the ROH meeting with company executives and talent held in Baltimore, Maryland: “You mentioned the meeting in Baltimore and that was interesting because a bunch of people flew in from all over the world. We sat down for a few hours, we discussed all these different ideas, everybody spoke up and everybody had a different point of view and it all got written down across this wall, so since then, so many of those ideas have been implemented and they’ve taken steps towards, ‘Okay, let’s start working on this aspect now’ or, ‘Let’s try this idea.’ They’re showing how much now they wanna rebuild and they’ve had to do that so many times. Ring of Honor is a company that’s built itself up and then the talent has gone elsewhere and they’ve had to build themselves back up again and what we’re doing now, we’re in a stage of rebuild and everybody is working tirelessly together to try and make it the best product that it can be.”

On considering starting a pro wrestling school / gym when his active in-ring career is over: “Yeah definitely. With the amount of arguments I’ve had with bookers over the years, I’d like to think I knew something,” Haskins laughed. “I guess kinda putting that to test at some point. I think there’s definitely other roles that you can sort of transition into wrestling-wise. Something else I’ve also been working on for a few years is I’m also a qualified personal trainer so, what I’m gonna transition to at some point is opening up my own gym, or whether it’s an affiliate program with a certain company or something, and just being able to train other people, train young aspiring wrestlers but also use the science behind it as well because a lot of the times when you come through into training schools, the things that they tell you to do, physically or whatever, workout wise, isn’t the right advice. A lot of times I think that it’s just things that people try to do to see how tough you are mentally to see whether you’re gonna try and grit your teeth and get through it or not, but I also feel in a lot of regards that can be quite detrimental towards people’s sort of long-term career so, yeah, training aspect is something I’m definitely salivating at the prospect of, and yeah, it would be nice as well to have your own kind of little gym that you can go into, you have whatever equipment that you need and just being able to live out your days doing something that you love.”

Check out the complete Mark Haskins interview at PostWrestling.com.