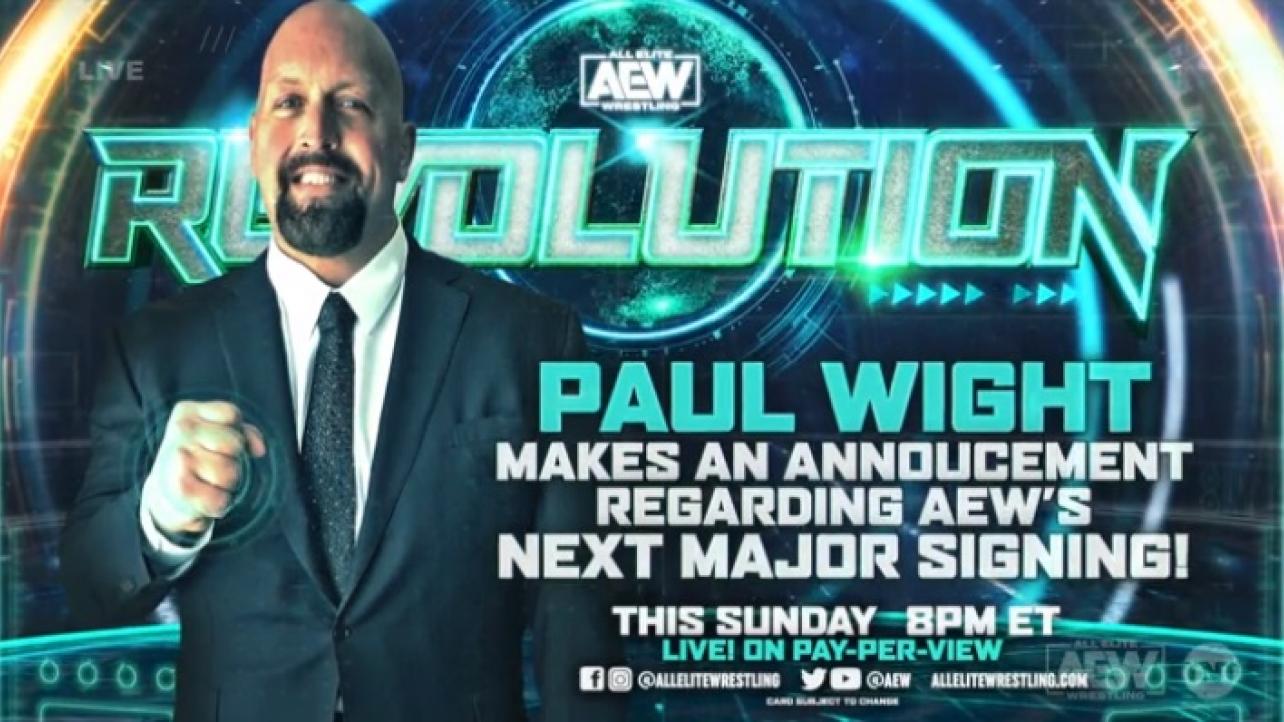 The former Big Show made his All Elite Wrestling debut on the AEW Revolution go-home edition of Dynamite on TNT on Wednesday evening.

Wight appeared in a promo segment along with Tony Schiavone, as the two men will be the commentators for the new AEW DARK Elevation show from AEW.

During his appearance on the weekly AEW on TNT program, the former WCW star known as The Giant promised another legendary Hall Of Famer is signing with AEW and will be unveiled at this Sunday’s AEW Revolution PPV.

Featured below is a recap of the segment from this week’s show:

Now the commentators kick it over to Tony Schiavone, who is standing on the entrance ramp with a microphone. He introduces for the first time in AEW, Paul Wight. The man formerly known as Big Show in WWE and The Giant in WCW makes his way out wearing his new “No More B.S.” (Big Show) official AEW t-shirt.

Paul Wight comes out and talks to Schiavone as the fans break out in a “No More B.S.! No More B.S.!” chant. Wight asks who saw this coming? He says Schiavone knew him since he was a young, long-haired rookie with talent and potential. He talks about making his start in the business on TNT and now he has come full circle.

He talks about being excited to work with the talent in AEW and brings up AEW DARK Elevation, the new show he will commentate alongside Schiavone for All Elite Wrestling.

Wight claims he is taking his commentary job so serious that he’s going to prove it by breaking a big scoop right now. He says this Sunday at AEW Revolution, AEW is going to sign and bring to work a legendary talent that is going to come to work for AEW. He tells the fans it’s not who they think. He tells us to tune in this Sunday to the PPV to see who it is and tells us to remember he knew it first.

Check out some highlights of Paul Wight’s appearance on Dynamite via the tweets embedded below, and make sure to join us here at eWrestling.com this Sunday night for live AEW Revolution results coverage.

.@PaulWight has a BIG surprise set for #AEWRevolution this Sunday!
RT with your predictions on who you think it could be.