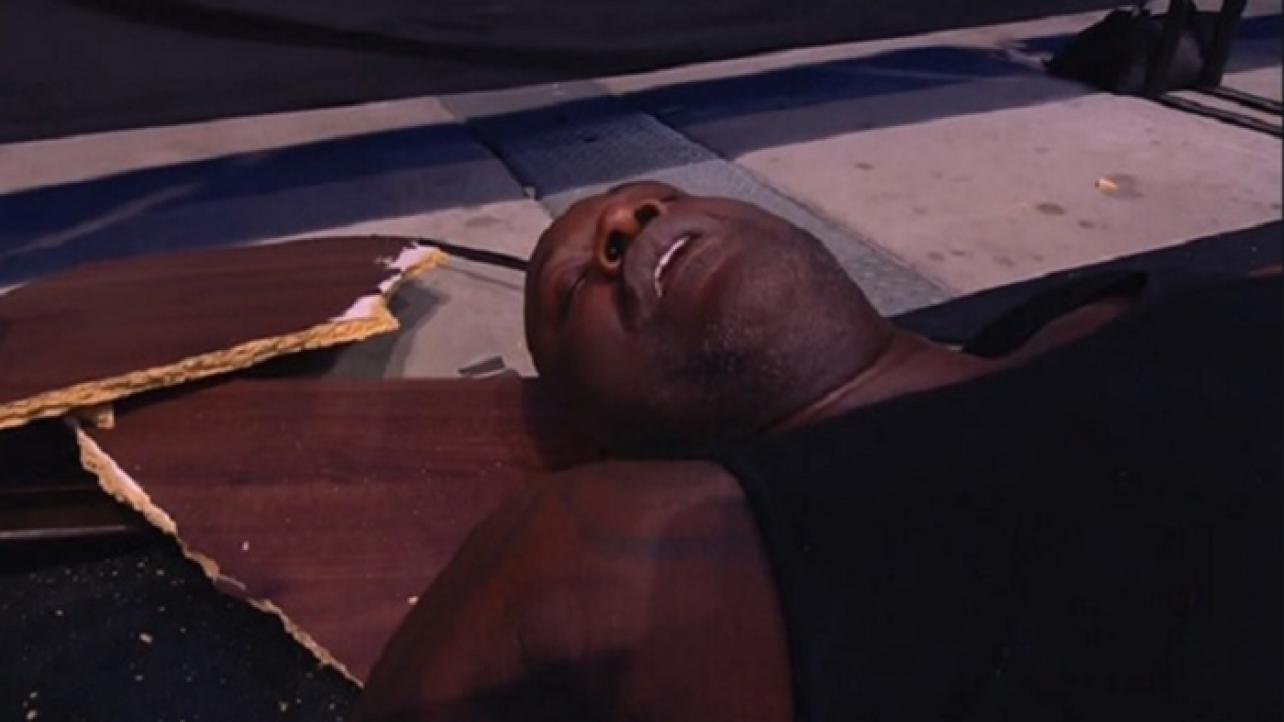 The AEW Revolution 2021 go-home edition of Dynamite: The Crossroads aired on TNT on Wednesday night, March 3, 2021, from Daily’s Place amphitheater in Jacksonville, FL., featuring the in-ring debut of NBA legend Shaquille O’Neal in a featured mixed tag-team bout that included his partner Jade Cargill and the opposition of “The American Nightmare” Cody Rhodes and Red Velvet.

In a hard-fought, back-and-forth battle that kicked off the final show on TNT leading up to Sunday night’s AEW Revolution PPV, Shaq ended up being put through two tables on the floor after being knocked off the ring apron by a high cross-body splash from Rhodes.

The spot resulted in Shaq remaining laid out in the broken table remains until Jade Cargill picked up the win for his team and the NBA Hall Of Famer was ultimately carted off to an ambulance, where he would eventually disappear to the dismay of AEW Dynamite commentator Tony Schiavone.

Featured below is a recap of the match and post-match scene from the Wednesday, March 3, 2021 episode of AEW Dynamite: The Crossroads on TNT. Also embedded below are video highlights of the match.

SHAQ PUT THROUGH TABLE ON AEW DYNAMITE: THE CROSSROADS

This week’s show kicks off with the usual traditional signature open and then we shoot live inside Daily’s Place where Jim Ross does his traditional introduction and then the lights immediately go out.

From there, the theme of “The American Nightmare” begins playing and out comes Cody Rhodes as pyro explodes and “The Dapper Yapper” Justin Roberts formally introduces one-half of the first team coming to the ring for tonight’s high-profile opening contest.

Arn Anderson comes out and joins Cody and as the two head to the ring, video highlights air to show how things built to this unique mixed tag-team showdown. After the package wraps up, Red Velvet is introduced and she makes her way down to the ring with plenty of pomp-and-circumstance of her own.

As she settles into the ring, her music fades down and the lights go out. When they come back on, Jade Cargill’s theme hits and she makes her way out to the top of the stage as pyro and fireworks erupt. The Excalibur and Tony Schiavone join in on commentary alongside “Good Ole’ J.R.” as we await the introduction of Shaq Diesel.

Finally, her music cuts off and the big screen video begins playing for NBA Hall Of Fame legend Shaquille O’Neal. Some cool music plays and then Shaq Daddy himself emerges throwing up the double-biceps pose as Justin Roberts gives him a nice introduction in the ring. He joins Jade and the two begin making their way to the ring for our first match of the evening here on the AEW Revolution 2021 go-home edition of Dynamite on TNT.

The bell sounds and it will be Shaq and Cody kicking things off for their respective teams. Shaq has a serious look on his face. The two lock-up and Shaq throws Cody half-way across the ring and shows off his muscles some more. The 1,000-or-so fans, as J.R. points out on commentary, are going wild inside Daily’s Place with chants for both guys. Shaq does the Muhammad Ali shuffle and the fans light up again.

We see Cody fire away at Shaq and hit him with a chop, only for Shaq to turn “The American Nightmare” and blast him with a big Paul Wight-style defeaning chop of his own. Shaq launches Cody across the ring and blasts him with another chop. In the corner of the ring, Shaq hits Cody with a big knee to the gut. Shaq moves methodically around the ring, stalking his opponent now, as he continues to dominate the action against the much more experienced wrestler.

Jade ends up tagging herself in as Cody and Shaq were fighting in the heel corner. Shaq and Cody leave the ring as Red Velvet is forced to come in. Jade and Velvet circle each other and now we see Cargill blast Velvet with a big running boot to the chest that floors her opponent. Velvet backs in a corner now and when Jade comes in after her, Red ducks her, bobs, weaves and starts peppering her with her first connecting offensive shots of the evening. This doesn’t last long, however, as Jade turns the tables and backs Red in the corner before launching her across the ring and dropping down to do some arrogant push-ups.

Cargill hits a Scott Hall-style fall-away slam before doing an HBK-style nip-up and posing for the fans. We see Shaq get knocked off the ring apron, but he lands on his feet on the floor, only to back up to a big chair shot from behind by Austin Gunn. Other members of The Nightmare Family jump the barricade and get involved. As the ref tries to restore order, we see Red Velvet climb to the top-rope and flip off onto a giant pile of bodies in a wicked-awesome spot that gets the replay and “Holy Sh*t!” chant-treatment. Back in the ring, however, Jade takes back over the offensive control of Red and locks her in the figure-four leg-lock in the center of the ring.

Now we see Jade head to the floor where she retrieves a table from under the ring. The commentators point out that Cody and even Shaq, her own partner, look concerned at how far Jade is taking things. Red comes out after her and catches her off-guard with some offense before pulling out a second table, which she sets up next to the one that Jade just set up. Back in the ring, Red hits a crazy enzugiri kick that connects right on the money with the kisser of Jade. Red then tags in Cody, which means Shaq has to come back in as well. He does. Now we see Shaq flex and then raise his hand for a test-of-strength spot with Cody. For some goofy reason, Cody looks to be ready to oblige. Instead, we see the ring-savvy of “The American Nightmare” as he pretends to raise his hand only to kick Shaq in the bread-basket.

Shaq recovers quickly and blasts Cody with a big shot before hitting him with a powerful follow-up power bomb. Cody is quick to recover from this, however, and he hits a big Hulk Hogan on Andre The Giant style struggle power-slam on Shaq. Moments later, Cody and Shaq tag out and Red Velvet and Jade Cargill come back in. We see Red and Jade trade shots, with neither woman establishing an offensive lead over the other. Jade hits a big spinebuster and goes for the cover, however Cody breaks it up. Shaq gets involved, so Cody pokes him in the eyes, hits the ropes and launches himself onto Shaq, where the two both fall down and crash through the two tables that were set up earlier. Jade looks stunned and when she turns around, she is blasted with a spear from Velvet. She covers her but Jade kicks out. Red goes to Arn Anderson on the floor for some quick coaching advice. She goes back and picks up Jade, hoisting her over her shoulders. Jade reverses but Red avoids a counter-attempt. Jade ends up double-hooking Red’s arms behind her back. She hoists her up in this position and slams her down face-first. 1-2-3. It’s all over.

Shaq Loaded Into Ambulance, Then Disappears

Once the match ends, the commentators turn their attention to the scene on the floor at ringside, focusing on Shaq still being down and out in the mess of broken tables that he crashed through with Cody’s weight slamming down on top of him. They inform us that they still stay with this story as we see doctors checking on him. On that note, we head to a commercial break.

We return to the break to see replays and highlights of the table spot with Shaq and Cody, as well as the final action in the ring that led up to the finish of the match before we return to footage from the break to see Shaq being loaded up on a gurney and put in the back of an ambulance. When we return live, Tony Schiavone is on the scene but he notices that Shaq is now nowhere to be found.

He says he saw him loaded in there, as we did via the footage from the break, and appears shocked that he has disappeared from view. This ends the segment.

Watch video highlights of Shaquille O’Neal’s in-ring debut and post-match segment from the 3/3 edition of AEW Dynamite: The Crossroads via the tweets embedded below.

HERE WE GO! If you’re not watching you better tune in right now!
Watch #AEWDynamite NOW on @TNTDrama.@SHAQ @Jade_Cargill pic.twitter.com/wmM5X7Bl3I

.@Jade_Cargill on that next level power!
Watch #AEWDynamite NOW on @TNTDrama pic.twitter.com/FsFj91XVdk

.@SHAQ takes out the #NightmareFamily at ringside!
Watch #AEWDynamite NOW on @TNTDrama pic.twitter.com/I2LDPTTDcq

Please send our condolences to the tables #AEWDynamite pic.twitter.com/OFY9v94zWw