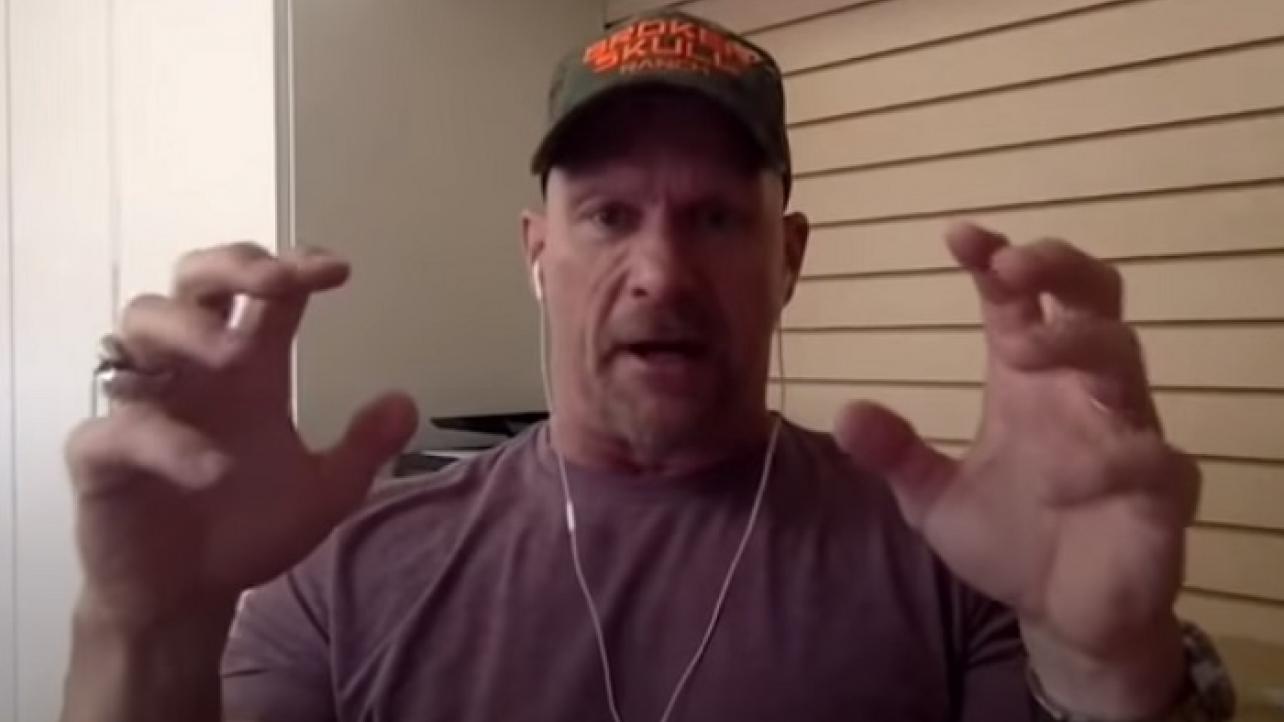 Who does “Stone Cold” Steve Austin think is the current top WWE Superstar on the Monday Night Raw brand? How about the Friday Night SmackDown brand?

“The Texas Rattlesnake” answered these questions and more during his recent “1-on-1 with Ryan Satin” interview for FOX Sports.

As noted, the WWE Hall Of Fame legend recently sat down with the former WWE Backstage On FS1 analyst to promote the upcoming new season of his USA Network reality series, “Straight Up Steve Austin,” as well as the latest installment his WWE Network video podcast, “The Broken Skull Sessions,” which returns this Sunday with special guest, Bayley.

In addition to the highlights we posted from Ryan Satin’s new in-depth video interview with Steve Austin, featured below are some more excerpts from their extensive sit-down discussion.

On who is impressing him the most these days in the WWE women’s divisions: “Well, I’ve said in the past, Bayley … when she turned heel, I think she was one of the most entertaining heels in the business. There’s layers to her work. From the female standpoint – Charlotte just came back, and just started tuning in to see what she’s got going on, and Becky Lynch left to have her baby – but, right now, I really like Bayley’s heel work. I’ve been watching it and liking it for quite some time.”

On who is impressing him the most these days in the WWE men’s divisions: “On the guy’s standpoint, like you just said, Drew McIntyre came by to shoot the show. Mick Foley was on the podcast years ago and he goes, ‘Hey, man. This guy.” If you’d have told me he was going to be the guy years ago, I’d have said no. He’s a mid-card guy. Mick goes, ‘You should watch this guy.’ I’ve been watching him and to meet him in person and to get a feel for his physicality and his mentality and the way he thinks about the business, very impressed with Drew. He’s definitely really, really earned the position he’s at in the business today.”

On his thoughts on Randy Orton’s current run in WWE at this stage in his veteran career with the promotion: “Randy’s on fire right now. I watched RAW just this past Monday, as we speak, whenever it was. And he was just … the stuff, the promos that he was cutting on the legends, the actions, the match with Jeff Hardy where he’s working that arm. Slow, methodical, vicious. He’s so dialed in right now. This is the best Randy Orton we’ve ever seen. He’s grown into it. He’s grown into it. He’s always been good in the ring. But, I feel now, his character work and his promos, is off the charts. His work has always been there. But, now, he’s nailing it all.”

On WWE turning Roman Reigns heel and aligning him with Paul Heyman: “I like it because it seems like Paul helps anchor him. [Roman]’s always been really good. He can work his ass off. They needed to turn him heel way back in the day. But, they never would pull the trigger. Vince, you know. He’s the guy. He’s a good looking guy. Body. He can work. Vince never wanted to pull the trigger. But, people wanted that heel run out of him, you know? So, now I think with Paul E, I think it stabilizes him and gives him an anchor. I like everything that he’s doing now. A lot. It all makes sense and it’s working.”

Check out the complete Steve Austin “1-on-1 with Ryan Satin” interview via the YouTube video embedded below, or by visiting FOXSports.com.