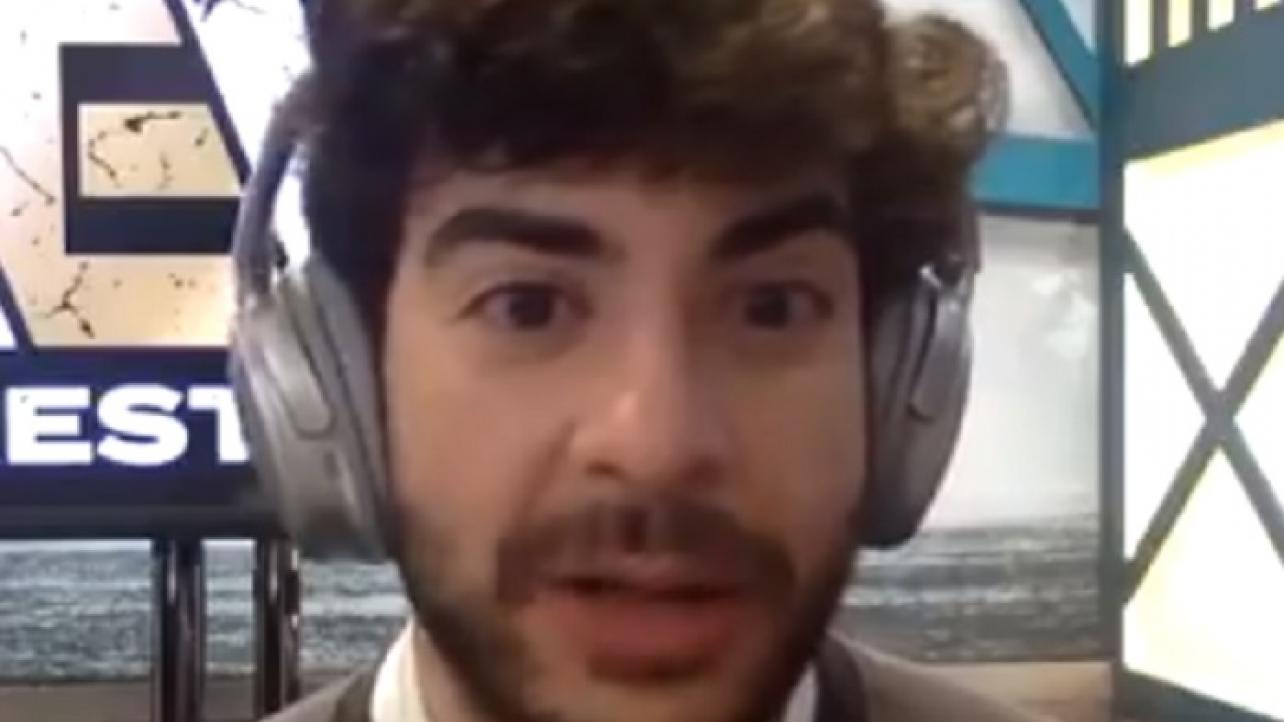 WATCH: Tony Khan Reveals Hints That Narrows Down Who AEW Talent Signing Could Be (VIDEO)

The anticipation continues to build for the unveiling of the mystery “Hall Of Fame-worthy” talent signing at Sunday night’s AEW Revolution 2021 pay-per-view.

Following a recent appearance by AEW President Tony Khan on the popular SiriusXM pro wrestling program, Busted Open Radio, the buzz regarding the topic has picked up even more.

During his interview with show hosts Dave LaGreca and Mark Henry, the All Elite Wrestling CEO gave some hints about the big name that AEW will officially add to their roster this coming Sunday night.

When asked if the “Hall Of Fame-worthy” talent signing announcement will be a significant topic of discussion within the pro wrestling community on Monday morning.

“Yes,” an emphatic Khan responded before adding, “[It’s] one of my all-time favorite wrestlers.”

The AEW signing has the boss-man excited heading into the AEW Revolution 2021 PPV event scheduled to emanate from Daily’s Place amphitheater in Jacksonville, Florida.

Things didn’t end there, as the 2020 Wrestling Observer Pro Wrestling Promoter and Booker of the Year Award winner would go on to drop some additional hints regarding the big talent signing that will be announced at Sunday night’s PPV.

“I tipped this on AEW Unrestricted — I said the gender is a male,” said Khan, narrowing down the field of speculation for the pro wrestling community. “He’s coming [and] he’s going to do great things for us, he’s committed [and] he’s going to sign a contract on Sunday at Revolution on pay-per-view.”

Khan wrapped up the tease by telling show co-host WWE Hall Of Fame legend “The World’s Strongest Man” Mark Henry that he will personally be very excited about the news.

“We’re going to have all these great matches, and also we’ll have this big news coming out of the show,” said Khan. “Mark, I know you’ll be very excited. I think it’s going to be really cool.”

Check out some of the video highlights of the Tony Khan appearance on SiriusXM’s Busted Open Radio with Dave LaGreca and Mark Henry via the tweet embedded below courtesy of the official Twitter page of the popular pro wrestling program. H/T to WrestlingHeadlines.com for transcribing the above interview quotes.

Make sure to join us here at eWrestling.com on Sunday night for live AEW Revolution results coverage from Jacksonville, FL!

“It’s one of my favorite wrestlers of all time…he’s gonna do great things for us.”@TonyKhan discusses with @davidlagreca1 & @TheMarkHenry the surprise @AEW signing that will show up on #AEWRevolution this Sunday pic.twitter.com/24t0PnEsbc

WATCH: Tony Khan Reveals Hints That Narrows Down Who AEW Talent Signing Could Be (VIDEO)