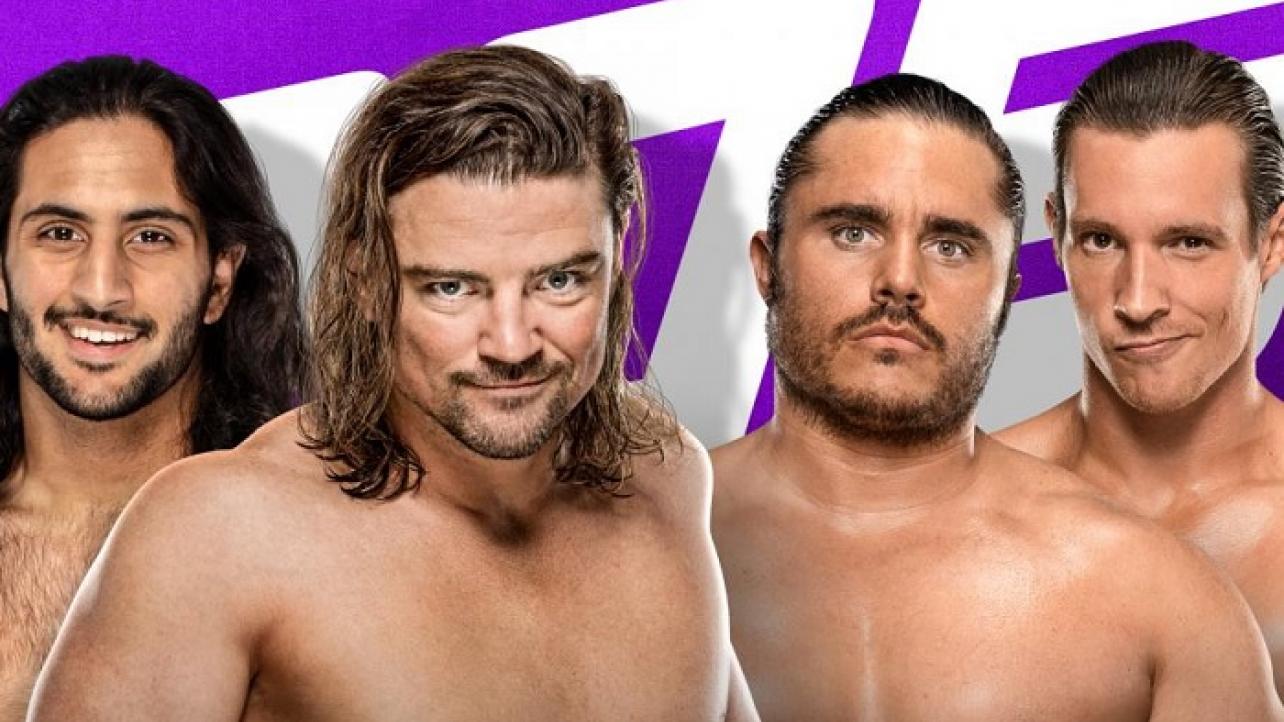 The Most Exciting Hour on Television returns this evening, as WWE 205 Live premieres on the WWE Network with a new episode of the weekly purple brand program.

On tap for this week’s installment of the Cruiserweight-themed show, which begins on the WWE Network immediately following the WWE Friday Night SmackDown on FOX broadcast for Oct. 30, 2020, is another exciting pair of matches.

First up, after his impressive showing on last week’s edition of WWE 205 Live, new WWE Performance Center recruit Curt Stallion returns to go one-on-one against purple brand veteran Ariya Daivari, while the headline bout this week will feature tag-team action, as Mansoor and The Brian Kendrick team up to take on the Ever-Rise duo — Chase Parker and Matt Martel.

Featured below are complete WWE 205 Live results for the episode the streamed live via the WWE Network on Friday, October 30, 2020, from the Capitol Wrestling Center in Orlando, Florida.

The usual weekly signature video package gets us started and after it wraps up, we shoot inside the Capitol Wrestling Center with a jam-packed ThunderDome virtual fan audience in attendance in the Orlando, FL. based venue ready for the best Cruiserweight action WWE has to offer.

Tony Nese Joins In On Commentary

We are privelaged to be joined by “The Premier Athlete” for special guest commentary for our opening contest on this week’s purple brand show. After his involvement in the Curt Stallion match last week, Tony Nese is a fitting addition to the announce desk for this week’s show.

The first match is about to get underway now, as the ring entrances of our first two wrestlers competing this evening — Ariya Daivari and the aforementioned WWE Performance Center recruit, Stallion — are now in the rear-view mirror.

The bell sounds and here we go with our first of two matches scheduled for this week’s show. Early on, Stallion dominates the offense over “The Persian Lion,” while “The Premier Athlete” does anything but give props to the newcomer to the Cruiserweight scene in WWE, focusing instead on the Running Nese that he blasted the rookie with when interfering in his match last week.

As the action spills out to the floor, with Stallion still very much comfortably controlling the offense in this bout, we see Nese stand up from his chair at the announce desk, where he jaws at Stallion.

The WWE PC recruit ends up getting distracted by Nese, which allows Daivari to shift the momentum in his favor. As the action resumes inside the squared circle, Daivari yanks on a side head lock while controlling his opponent on the mat. He sends him out to the floor with emphasis and follows him out to deliver some additional punishment.

Now Stallion builds more momentum as he is in the midst of a full-on comeback at this point. He gets in a nice sequence of offense before looking to close things out by heading to the top-rope. Instead, Daivari cuts him off and sends him down to the mat. Daivari then climbs to the top-rope himself and hits a picture-perfect Persian Splash on Stallion for a near fall.

Stallion takes over on offense again, hitting a nice back-breaker and a good follow up slam for a near fall of his own. The fight spills out to the floor again. Stallion throws Daivari back in the ring and once again, Nese stands up from his chair at the announce desk in an attempt to distract Stallion again. Stallion pauses and looks at him briefly, but opts instead to head back into the ring to handle the business at hand.

As he re-enters the ring, Nese decides to go even further with his attempt at providing a match-altering distraction, which he does — but not in the manner he intended. After hopping up on the ring apron, Nese is met with a vicious headbutt from Stallion that sends him crashing to the floor below outside the ring. Stallion turns and while Daivari tried to capitalize on Stallion’s attention being diverted momentarily, it didn’t work out, as Stallion was ready for him and ended up shocking him with a pinfall victory out of nowhere.

After the match ends, we see Nese and Daivari upset in the ring as Stallion heads up the ramp celebrating his victory as he makes his way back through the curtain to the backstage area.

Speaking of the backstage area, we shoot to an “earlier today” segment from the WWE 205 Live locker room, where The Brian Kendrick and Mansoor are talking about their match on last week’s purple brand program.

As they continue to talk, in walks Matt Martel and Chase Parker — collectively known as Ever-Rise. The Cruiserweight tag-team talks some trash to Kendrick, talking about some of his past accomplishments before telling him he has gone soft.

Kendrick then makes an offer to head out to the ring and show him just how soft he is, as he challenges Martel and Parker to meet he and his new friend, Mansoor, in a tag-team match.

Ever-Rise vs. The Brian Kendrick & Mansoor

We see a couple of commercials, including a new one for the ongoing “30 Days of The Deadman,” celebration in honor of The Undertaker on the WWE Network, and then we head back to the ringside area.

The theme music of Ever-Rise plays and out comes Martel and Parker to the ring for this week’s main event. In tag-team action, the duo of Martel and Parker will meet the two men they confronted backstage earlier today — The Brian Kendrick and Mansoor.

With that said, “The Man With The Plan’s” theme music hits and out comes The Brian Kendrick. He stops and waits at the end of the entrance ramp for his tag-team partner for this evening, the undefeated rising contender — Mansoor.

The music fades down and with all four men in the ring, each team decides who will start things off and the bell sounds. Martel and Mansoor lock up to start off this week’s main event. Martel muscles Mansoor into the corner and over-celebrates, verbally taunting Mansoor and bragging about over-powering him.

The two lock-up again and now Mansoor yanks on the arm of Martel so hard that the Ever-Rise member crashes down to the canvas. Back to his feet, Mansoor continues to clamp down on the isolated limb of Martel. Finally Martel breaks free and as Mansoor comes off the ropes, Martel trips him up, talks some trash extra-loud again, and then tags in Parker.

Parker attempts to pick up where Martel left off, however Mansoor jumps back in the offensive lead and after getting Parker into his neck of the woods inside the squared circle, he leans over to his corner and tags in Kendrick. Kendrick focuses his offensive attack on the elbow and arm of Parker. He yanks on it and takes Parker down to the mat, driving knees and elbows into the isolated arm that he is focusing his attack on.

Kendrick tags Mansoor back in and Mansoor goes back to work on Parker, as the babyface duo are starting to pull ahead in our featured bout of the evening. Moments later, Parker tags Martel back in and a moment of confusion on the part of Mansoor leads to Ever-Rise jumping back in the offensive driver’s seat in this one. Mansoor tags Kendrick back in, however Ever-Rise remains in control, as they start to utilize frequent tags every minute or two to keep a fresh man on the weakened, softened up Kendrick.

The duo of Martel and Parker do a good job of cutting off the ring, keeping Kendrick on their half of the squared circle and keeping their strategy of utilizing quick tags in play. This keeps the more established duo in this bout in the offensive lead, however a simple error on their part left enough of a window of opportunity for the veteran Kendrick to take advantage of, as he fights his way back into the bout. As he likes to make the tag to Mansoor, however, he gets close but is ultimately cut off by Ever-Rise.

We see Kendrick stuck in a leg submission now and after missing with an enzugiri attempt after he escaped the hold, we see Martel miss a back elbow. This brief error allows Kendrick to leap to his corner where he makes the tag to the fresh and ready to erupt Mansoor.

Mansoor takes the hot tag and is beating up any-and-everything that moves. He looks for a sliced bread spot in the corner, as he attempted to take a page from the playbook of his tag-team partner, however Ever-Rise utilizes a quick double-team spot to avoid it. Moments later, however, he goes for it again and this time he hits it and scores the pinfall, giving he and Kendrick the win in this week’s WWE 205 Live main event.

WWE 205 Live Outro For This Week

Parker and Martel head out of the ring and make their way to the back as replays and highlights from the match are shown. We return live where we see Mansoor and Kendrick raise each other’s hands in victory as the announce duo of Vic Joseph and Nigel McGuinness thank us for tuning in to The Most Exciting Hour on Television. Thanks for choosing us for your WWE 205 Live results coverage this evening, and make sure to join us again next Friday — same bat-time, same bat-channel — for WWE 205 Live results coverage.

After their match last week, @KSAMANNY & @mrbriankendrick have a lot of mutual respect.