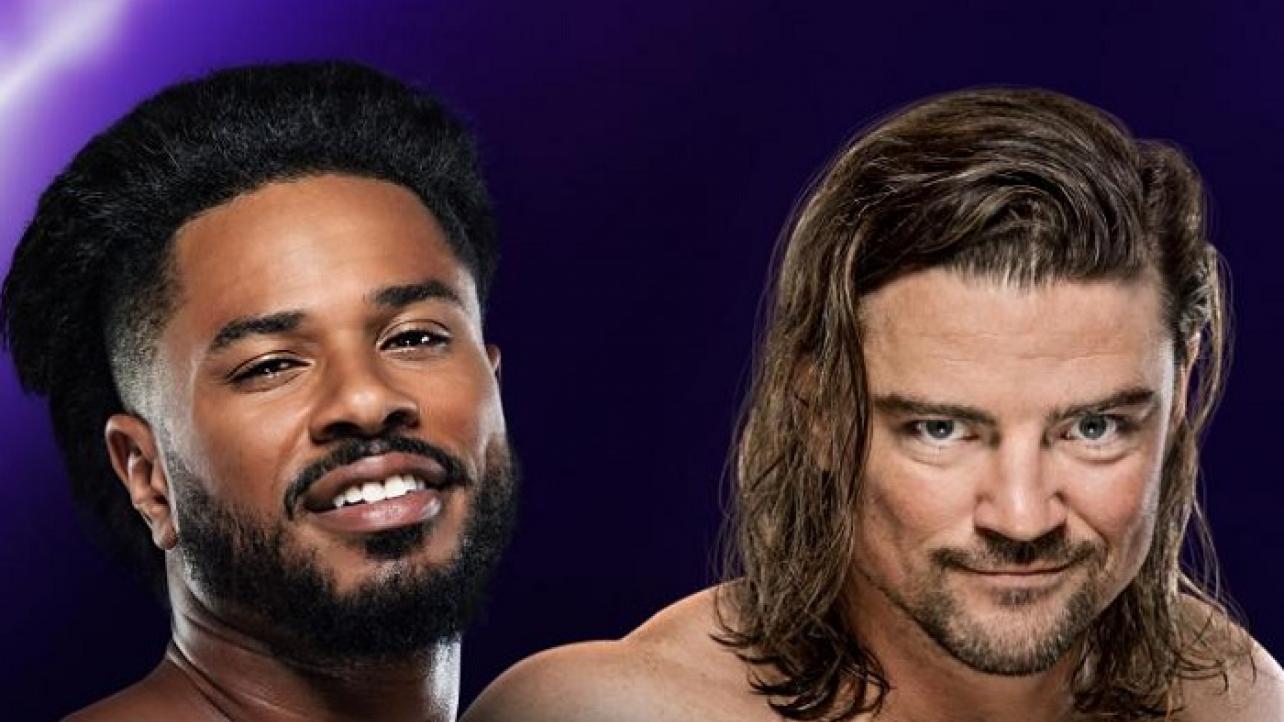 The landmark 200th episode of “The Most Exciting Hour on Television” has arrived!

WWE is back with their weekly Cruiserweight-themed show on the WWE Network, streaming immediately following the conclusion of the WWE Draft 2020 night one special edition of Friday Night SmackDown on FOX.

On tap for the purple brand program this week is Ashante “Thee” Adonis vs. The Brian Kendrick and Jake Atlas vs. Ariya Daivari, as well as a special look back at the NXT Cruiserweight Championship showdown between Santos Escobar and Isaiah “Swerve” Scott from the NXT TakeOver 31 special event this past Sunday night.

Featured below are WWE 205 Live results from the show held on Friday, October 9, 2020 from the Capitol Wrestling Center in Orlando, Florida.

Then. Now. Forever. After the graphic flashes, we see the regular weekly signature open for WWE 205 Live, as the purple brand is live now on the WWE Network with the landmark 200th episode of “The Hottest Hour On Television.”

After the signature video package wraps up, we shoot inside the Capitol Wrestling Center for the first time for WWE 205 Live, as Vic Joseph welcomes us to the show and then introduces his color commentator for tonight, Nigel McGuinness.

From there, the familiar sounds of Ariya Daivari’s theme plays inside the CWC as the WWE ThunderDome virtual fan audience reacts, as do the limited capacity audience seated inside the WWE PC-hosted new state-of-the-art venue.

The announcers have some fun joking about whether or not Daivari will be putting $10,000 on-the-line for this match tonight, bringing up his recent loss before his music cuts off and the theme for his opponent, Jake Atlas, plays.

Atlas skips down the entrance aisle and hops up on the ring apron before climbing to the middle rope to pose before his music cuts off. He hops down, the bell sounds and our opening contest on the milestone 200th edition of WWE 205 Live gets underway.

Daivari with a cheap shot to Atlas. Atlas b*tch smacks him and drops him down to the mat to respond. The action spills out to the floor where Atlas slams Daivari into the ring barricade on one side of the entrance aisle and then again on the other side.

Back in the ring, Daivari stops Atlas dead in his tracks, cutting off the momentum he had built with a big forearm before a nice neck-breaker inside the ring ropes. Daivari follows up with a couple of minutes in the offensive driver’s seat and now we’re seeing our first signs of life from Atlas.

Atlas and Daivari trade punches back-and-forth until Daivari dropkicks the legs out from under his opponent to regain the offensive momentum in the bout. Atlas tries a hope shot but Daivari brushes it off and blasts him with a chop that had enough force behind it that it dropped Atlas to the mat. Once he gets up, Daivari puts him down the same way.

Up a third time and when Daivari tries to do the same thing yet again, Atlas starts fighting back. This leads to the two working in the corner and when they fight out of the corner, Daivari surprises Atlas with a big DDT. He goes for the pin but Atlas hangs in there.

Daivari is frustrated but not discouraged, as he goes back to work on Atlas, who is now basically on the wrong side of a one-sided ass-whoopin’ contest. Just as it seems that way, Atlas starts to fire up for his big comeback.

Atlas dropkicks Daivari down and then follows up with a nice German suplex. He hits a running front kick to the grill of Daivari in the corner of the ring, decking him and covering him for a close two count. Daivari with a neck-breaker to cut off Atlas’ momentum. Daivari follows up with a big frog-splash off the top-rope for a very close near fall.

Daivari goes for the Hammerlock Lariat, however Atlas had it well-scouted and counters with a spinning back-elbow. Atlas follows up by knocking Daivari out of the ring. He goes for a follow-up tope suicida, however Daivari turned the corner around the ring post to avoid it. This only leads to Atlas calling an in-flight audible, as he changes direction mid-sprint and dives through the ropes on the other side of the ring, splashing onto Daivari.

Atlas gets Daivari back in the ring and looks to finish him off, however out of nowhere, Tony Nese sprints to the ring and takes out Atlas with a cheap shot, blasting him with a running knee. The ref calls for the bell. Daivari gets in some cheap shots after the match.

We move on to some highlights from a few shows ago when The Brian Kendrick managed to score a victory over Ashante “Thee” Adonis and then their most recent encounter, where Kendrick gave Adonis some words of encouragement after the fact.

After the video package, Vic Joseph informs us that tonight could be a case of the third time is the charm, as Adonis and Kendrick will meet on the milestone 200th episode of WWE 205 Live next.

On that note we head to a WWE Shop commercial and then a trailer for this Monday’s night two of the WWE Draft 2020 special episode of Monday Night Raw.

The Bollywood Boyz Are Coming Soon To WWE 205 Live

Now we are treated to a special vignette hyping the fact that “The Bollywood Boyz are coming soon” to the purple brand here at WWE 205 Live.

We are introduced to one final video package before we head back to live action here on the landmark 200th episode of the weekly Cruiserweight prorgram.

The video package gives fans a special look back at the NXT Cruiserweight Championship match between title-holder Santos Escobar of Legado Del Fantasma and Isaiah “Swerve” Scott from the TakeOver 31 special event this past Sunday night.

Once the Escobar-Scott video package wraps up, we head back live inside the Capitol Wrestling Center where the theme song for Ashante “Thee” Adonis plays. He begins making his way down to the ring for our second, featured match of the evening.

Looking like a midget Drew McIntyre 10 years after his retirement, “The Man with the Plan” himself, The Brian Kendrick, makes his way down to the ring for our headline attraction of the evening.

The bell sounds and these two lock up in this their third one-on-one meeting against each other here on the weekly purple brand program. Kendrick muscles Adonis into the corner off the initial lock-up, and he backs up, giving him a clean break.

On the next lock-up, Adonis snatches up a tight side head-lock. He whips him into the ropes and on the way back, he knocks him down. Adonis does some showboating, which Nigel McGuinness points out on commentary has been his downfall in the past.

Thus far it’s having no affect on the match, as Adonis is in a comfortable offensive lead, taking it to The Brian Kendrick. He knocks him out to the floor, however when he goes to go out after him, his boot gets stuck in the dressing around the ring apron, allowing Kendrick to take back over the offensive control in the match.

Back in the ring, Kendrick is now taking it to Adonis. He goes for his submission finisher, however Adonis avoids it. Kendrick with a nice suplex for a near fall. Now Kendrick locks up a ground submission hold on “Thee” Adonis, wrenching on the arm and shoulder of his opponent while cranking on the neck and jaw with his other arm.

Adonis fights his way loose and escapes, blasting Kendrick with repeated shots until he slumps down in the turnbuckles in the corner. Kendrick tries fighting back moments later, however Adonis remains in control and heads to the top-rope. He comes off with a nice flying body splash. Kendrick tried to roll through off the momentum of his impactful landing, however Adonis popped up and caught Kendrick off guard with an explosive DDT.

Both men take a few seconds getting back to their feet now. When they do, Adonis scoops Kendrick up as he charges at him, slamming him down with authority with a vicious spinebuster for a near fall.

Adonis yells out “This is my time! I’m gonna beat you!” He hooks Kendrick’s tights, looking for a suplex or something similar, but doesn’t get it as Kendrick fights his way out. After escaping, Kendrick gets Adonis down to the mat and locks him in the Captain’s Hook submission in the middle of the ring. Adonis crawls to the ropes but as soon as he gets close, Kendrick rolls and brings him back to the center of the ring. Nigel says Adonis is fading now.

He screams in pain as he tries again to struggle and claw and crawl his way over to the ropes. Kendrick pulls him back but Adonis rolls over for a pin attempt. Kendrick kicks out, but Adonis pops up and blasts him with a super kick. Adonis is shouting at Kendrick now to get up as he measures him and waits for him in the corner. He hits him with his Long Kiss Goodnight finisher for the pinfall victory.

After the victory, we watch as Adonis celebrates finally earning a victory in his third showdown against The Brian Kendrick. He shows the wear of the match as he walks around the ring. He and Kendrick finally lock eyes and they stop and shake hands. Kendrick exits the ring while Adonis returns to his post-match celebration in the ring.

That will do it for the special 200th episode of WWE 205 Live. Thanks for stopping by and make sure to join us here every week for live coverage of “The Hottest Hour On Television.”

Don’t miss the 200th episode of #205Live TONIGHT on @WWENetwork!

Stay tuned to @ewrestlingcom after the #WWEDraft2020 special edition of #SmackDownOnFox, as the milestone 200th episode of #205Live gets underway on @WWENetwork with “The Hottest Hour On Television!”