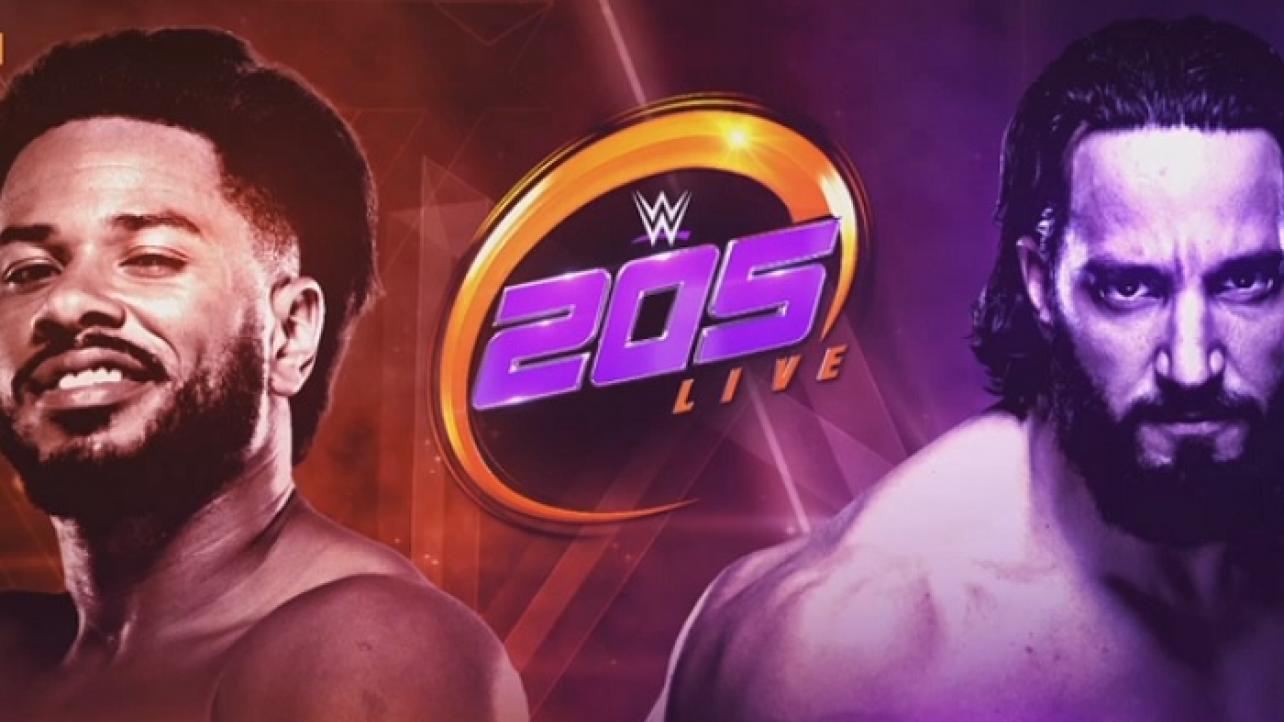 WWE is back from the Capitol Wrestling Center in Orlando, Florida in front of a jam-packed WWE ThunderDome virtual audience for the latest installment of WWE 205 Live, the company’s weekly Cruiserweight-themed show on the WWE Network.

On tap for “The Most Exciting Hour on Television” is a special message from Curt Stallion, a showdown between Ever-Rise and The Bollywood Boyz and a one-on-one battle pitting Ashante “Thee” Adonis against “The Premier Athlete” Tony Nese.

Featured below are complete WWE 205 Live results from Friday, November 20, 2020.

This week’s purple brand program kicks off on the WWE Network with the “Then. Now. Forever” signature playing, following by the regular weekly intro video package for WWE 205 Live.

From there we are welcomed inside the Capitol Wrestling Center inside the WWE Performance Center in Orlando, Florida, where we hear the commentary team of Nigel McGuinness and Vic Joseph welcome us to “The Most Exciting Hour on Television.”

The Bollywood Boyz vs. Ever-Rise

With that said, we head straight down to ringside, as it’s time for our first of two advertised matches on this week’s show, which will be featured in the tag-team division.

On that note, we hear the familiar tune of The Bollywood Boyz theme song and out they come to the squared circle for this week’s opener. As always, McGuinness has some fun with their antics and colorful entrance. We see some replays of what went down with their involvement in the Fatal-5-Way match to decide the new number one contender and next challenger to NXT Cruiserweight Champion Santos Escobar.

After that, we shoot back live inside the CWC where the Ever-Rise duo make their way down to the ring. With Chase Parker and Matt Martel, as well as Samir and Sunil Singh all in the ring now, the bell sounds and it’s time to get down to action with our first match of the evening here on WWE 205 Live.

Here in the early goings, we see some good back-and-forth action with neither team establishing a clear-cut offensive advantage. As the match begins to develop, we watch the duo of Ever-Rise pull ahead, as Martel and Parker utilize double-team action and quick-tags to keep fresh men on a weakened member of the Bollywood Boyz at all times.

Ariya Daivari Is Upset With The Bollywood Boyz

After the match, as The Bollywood Boyz celebrate, they exit the ring and head to the back, but before they can pass through the curtain, out comes Ariya Daivari, and he doesn’t look happy.

Daivari approaches Samir and Sunil from behind and complains, saying he spent a lot of money on them to be his insurance policy in the Fatal-5-Way No. 1 Contender on last week’s show, and they ended up being useless.

He claims their victory tonight was fine and dandy, but asks where were they last week. The Boyz talk briefly but then finally pass through the curtain, however Daivari continues walking and heads down to ringside.

As we return from a commercial break, we see Daivari has joined McGuinness and Joseph on commentary.

They introduce highlights from last week’s main event and ask Daivari to talk them through it. They show the finishing sequence of the match. Daivari claims they showed the one part he wasn’t doing well.

We see Curt Stallion pull off the win and earning the next shot at NXT Cruiserweight Champion Santos Escobar.

Curt Stallion With A Message For Santos Escobar

After the highlight package wraps up, we are introduced to an “earlier today” video message from the number one contender himself.

With that said, Curt Stallion is shown inside the training room in the WWE Performance Center.

The newest WWE PC recruit on the purple brand talks about his big win on last week’s show and says when he came backstage afterwards, everyone was very congratulatory to him except one person — Santos Escobar. The champion himself.

Stallion says that’s fine. He points out that they could have their title showdown anywhere. He says he’s got two words for him and says “Smarten Up” in Spanish, and then again in English.

We’re back live again inside the CWC and with Ariya Daivari still seated alongside Nigel McGuinness and Vic Joseph on guest commentary for our main event this week, out to the ring comes the first competitor in our featured bout of the evening.

As “The Premier Athlete” Tony Nese makes his way down to the ring, the announcers talk about his storied history on the brand. From there, out comes his opponent for tonight’s main event match-up.

On that note, we hear the familiar theme of Ashante “Thee” Adonis and he makes his way down to the squared circle for this week’s showdown as McGuinness and Joseph talk about his new attitude as of late.

The bell sounds and we’re off-and-running with our main event. The two are evenly matched early on. After a minute or two, Nese slides out to the floor and grabs a headset and talks to the commentators. He yells to the ring telling Adonis he can do this all night. He jokes around on commentary as the referee reaches the count of five.

Nese finally re-enters the ring, however “Thee” Adonis is waiting for him and meets him with a couple of knuckle sandwiches. He sends Nese into the corner and splashes onto him. He whips him into the other corner and does the same. Now a nice air-drop drop kick from Adonis sends Nese back out to the floor, this time not under his own valition.

Adonis joins him out there this time, and he taunts Daivari while adding further punishment to the weakened 205 Live veteran, bouncing his head off the announcers table before following over and blasting him with a knife edge chop. He kneels down next to him and taunts him, similar to how he did in the ring last week when Stallion knelt down next to him to mock him.

After showboating with the skirt dressing for the ring apron, Nese dropkicks Adonis from the ring and he goes flying into the ring barricade. “The Premier Athlete” brings him back into the ring and is now enjoying a comfortable offensive lead in the bout.

As Nese continues to dominate the action, Daivari takes it upon himself to taunt and mock Adonis on commentary, asking McGuiness and Joseph where his fancy dance moves are now, and asking why he isn’t playing with his hair anymore. Just as he gets comfortable making fun of Adonis, we see “Thee” Adonis start firing back at Nese with punches after hoisting him up on his shoulders for a momentum-shifting spot in the main event.

Wtih Adonis starting to pull ahead by quickening the pace, he picks Nese up and drops him face-first. Daivari tells Joseph he’s sick of all the praise he’s giving this guy. He slams his headset down and leaves the announce table. Adonis hits a move, does a little showboating dance, and then tosses Nese out of the ring. He follows him out and right in front of Daivari, throws him back in the ring.

An attempted distraction from Daivari moments later in the ring leads to Nese getting a shine spot by turning the momentum in his favor and blasting him with a big kick. Now Nese picks Adonis up but Adonis escapes. Daivari loads his hand up with a foreign object and he goes to swing but Adonis reverses Nese into him.

Daivari avoids hitting Nese, however seconds later, just blatantly enters the ring. Unfortunately for him, Adonis was able to handle the interference, as he sends Daivari down with a big sidewalk slam. He then waits for Nese to get up and blasts him with a super kick that he calls “The Long Kiss Goodnight.” 1-2-3. Adonis picks up what McGuinness and Joseph tout as the biggest victory in the young career of Ashante “Thee” Adonis.

After The Match: 205 Live Wraps Up

We see Nese and Daivari together at the top of the entrance way bitter about what just went down while Adonis is shown celebrating his big victory as “The Most Exciting Hour on Television” comes to an end.

Thanks for joining us here for WWE 205 Live results coverage this evening. Make sure to stop back by again next Friday night for live purple brand coverage once again.

Tonight the Bollywood Bozos are gonna get a TASTE! #205live https://t.co/rXNOjB5Wd8